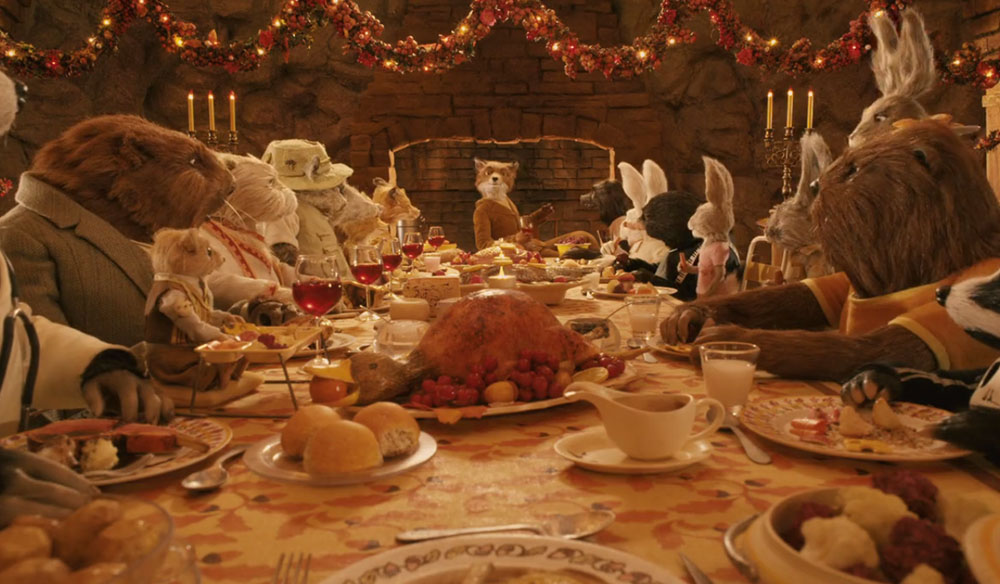 The Power of the Tableau Shot

Painterly staging and framing of a tableau shot can give your movie a striking visual quality. Let’s look at some examples.

A tableau can be simply defined as a picture, but more specifically, and for the purposes of this article, tableau will be used to refer to the arrangement of people and objects within the confines of your cinematic frame. Now you might be thinking… doesn’t that just refer to any shot? Sure. If every frame is a painting, then every shot is a form of tableau.

But the kinds of tableau shots I’ll be talking about in this article require a mastery of composition and staging that point back to a time in history before our current inundation with moving pictures, when theater and paintings were reigned. A well-done tableau shot is the type of artful image that you wouldn’t mind framing and hanging on your living room wall. 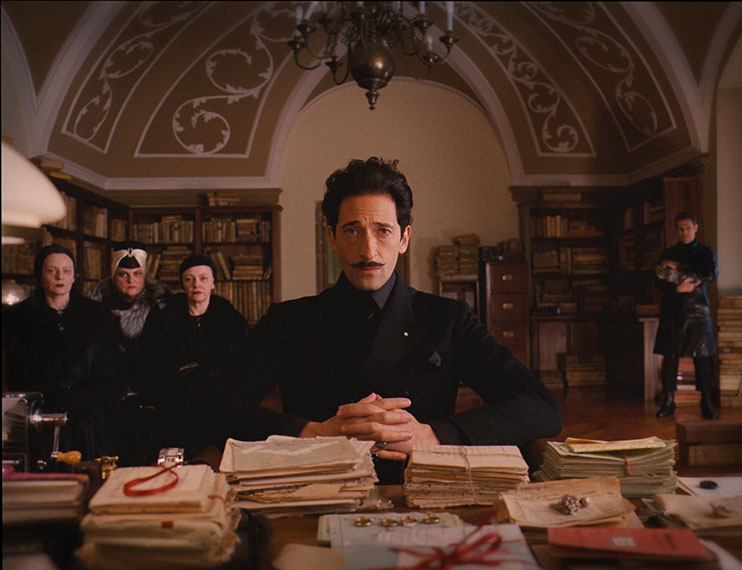 Much has been written of Wes Anderson’s symmetrical perfectionism and center-point framing in which characters often face the camera head on. These elements of composition, along with an obsession for every possible visual detail, are important for developing a striking tableau style.

The origins of Wes Anderson’s framing inclinations owe a debt to the theatrical tradition of tableau vivant, a form of staging in which an assortment of actors would stand frozen in a picturesque pose in front of an audience. The overall effect of any given tableau vivant would end up looking like a three-dimensional painting. In fact, tableau vivants would often be used to recreate classical paintings. 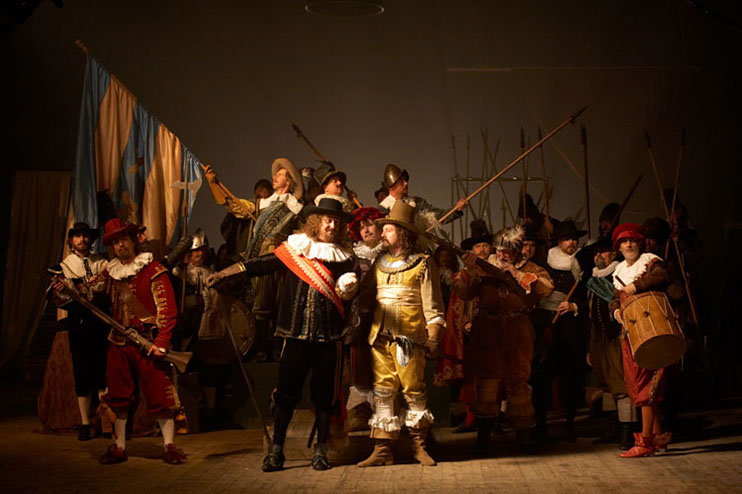 Peter Greenaway is an important, modern practitioner of the tableau vivant and makes clear use of the technique in Nightwatching, a film in which Greenaway staged an analysis of Rembrandt’s famous painting, The Night Watch, in an effort to uncover a murderer.

This interesting film isn’t Greenaway’s first foray into the tableau shot. He has used tableau shots throughout his career in striking films such as A Zed & Two Noughts and The Cook, The Thief, His Wife, & Her Lover. 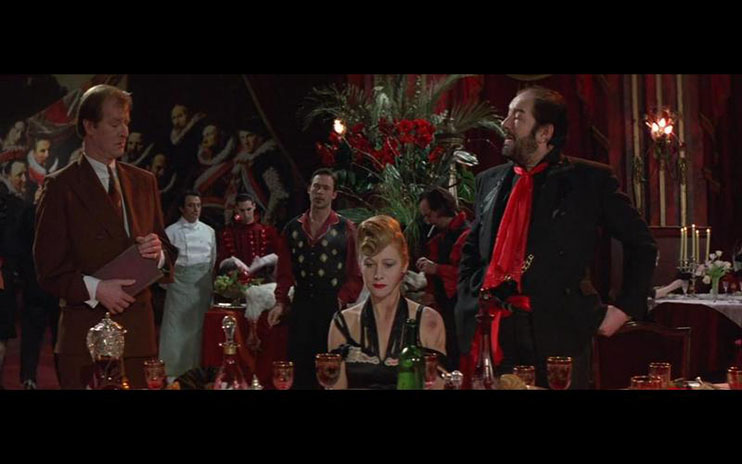 The Cook, the Thief, His Wife, & Her Lover via Allarts

In watching the films of Peter Greenaway and Wes Anderson, one will immediately find an aesthetic affinity between the two filmmakers. While it is likely that Greenaway influenced Anderson, it is perhaps safer to say that both filmmakers undeniably share a mutual respect for the painterly, theatrical origins of the tableau vivant and have sought to express their own cinematic variations that sometimes employ a moving camera. 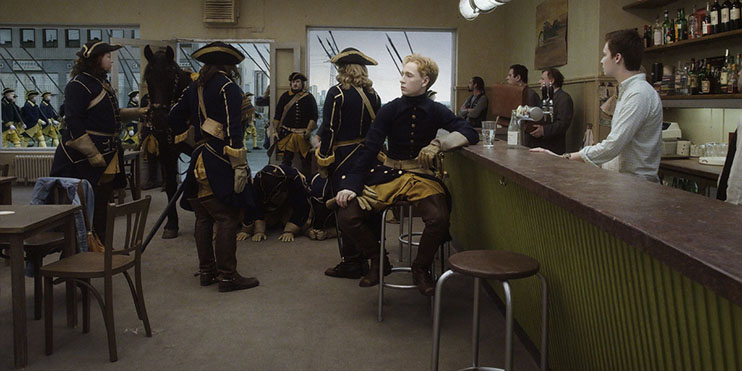 Tableau shots with camera movement are great to watch, but it is even more impressive when a filmmaker manages to create feature films comprised almost entirely of static tableau shots, as the Swedish director Roy Andersson has done with last three films. These meticulously crafted films include Songs From the Second Floor, You, the Living, and A Pigeon Sat on a Branch Reflecting on Existence.

With these films, Andersson has created filmic paintings with a remarkable attention to practical craft, a technique which can often get overlooked in a media world filled with digital effects. Andersson has an awareness of blocking, depth, color, and stillness that is truly astounding. Andersson does almost all of his effects in camera and treats each of his characters and sets as if it were an element of an elaborately composed painting.

The tradition of the masterful tableau shot goes back through cinematic history with important voices ranging from Chantal Akerman to Sergei Parajanov. The tableau shot can even be tracked to the earliest days of cinema itself with the Lumiere brothers and their one shot, one-minute long, actuality films. 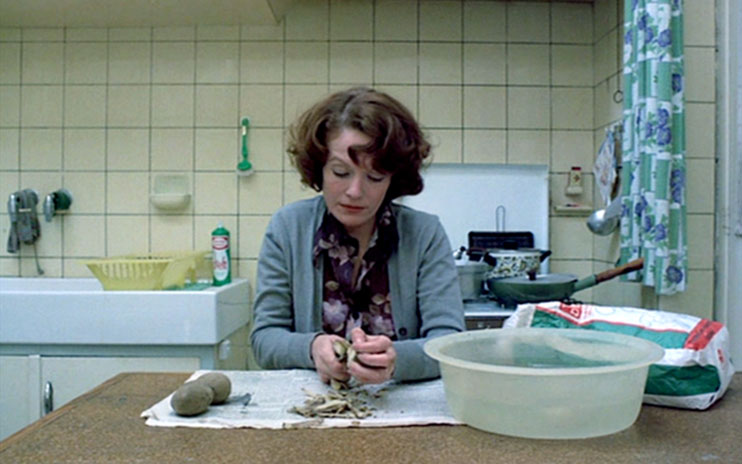 Setting up Your Own Tableau Shot

Let’s break down some considerations when you are setting up your own tableau shot.

Select a location that will enable a complex and interesting arrangement of your characters. When it comes to the tableau shot, the set is your stage and will play heavily upon the impressiveness of your tableau shot. 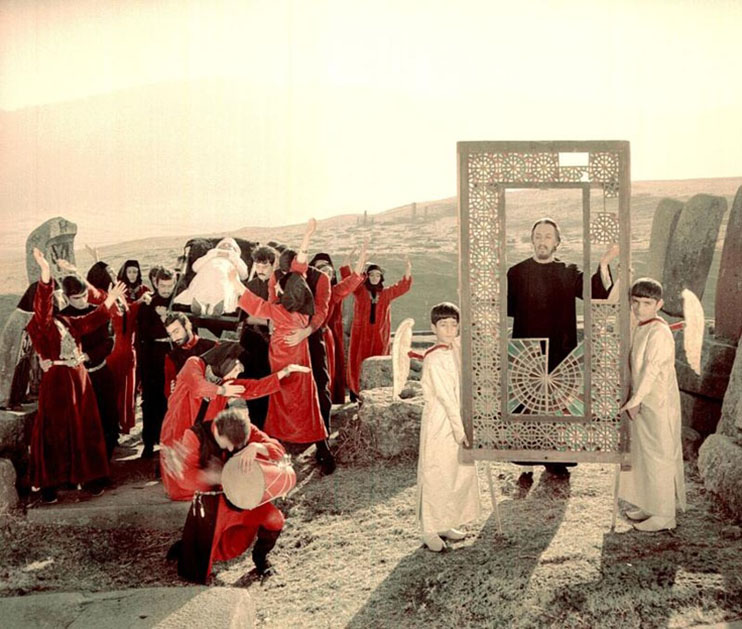 The Color of Pomegranates via Kino Video 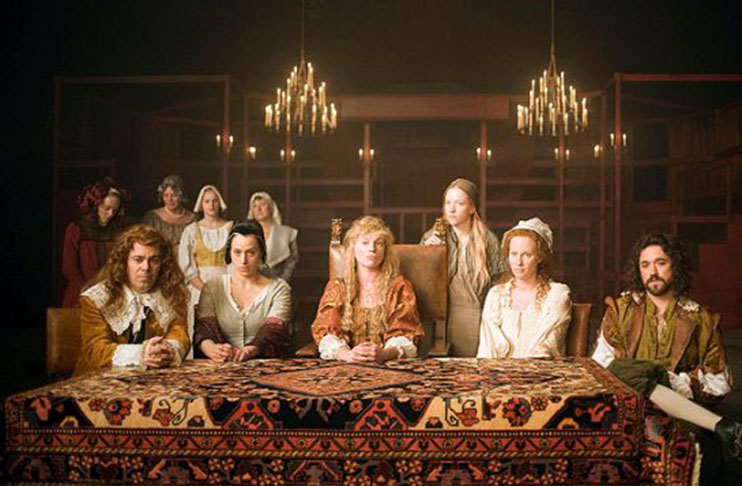 Position your characters in the frame while keeping foreground and background elements in mind. Remember that you are working in the X, Y, and Z-axes. If you are stumped or need inspiration on how to block your characters, look at old paintings. 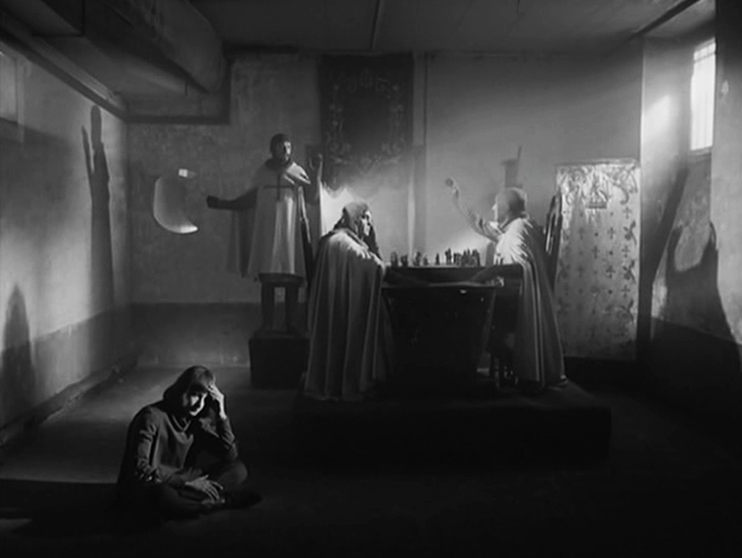 Set up a shot that includes as much visual information as possible without overloading your viewer. There is a fine line between a “busy” or “over-crowded” frame and a truly masterful tableau shot. Consider the amount of time it takes to “read” the visual information in your image. 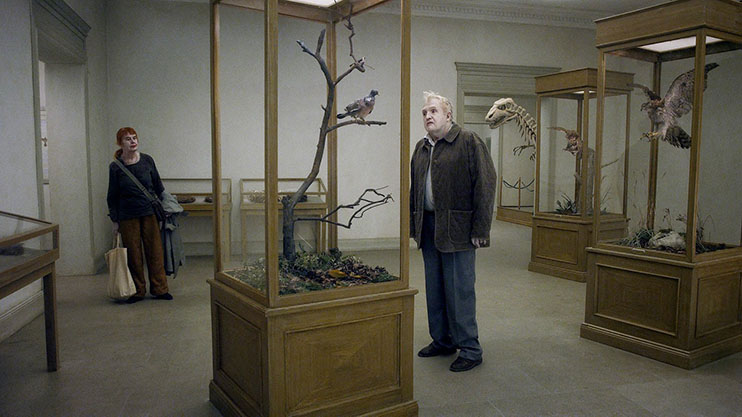 When the information within your frame overfloweth, it may be time to move your camera to accommodate. Depending on your stylistic inclinations, use a tracking, dolly, tilt, or panning shot to convey the visual information of your tableau shot to your viewers. 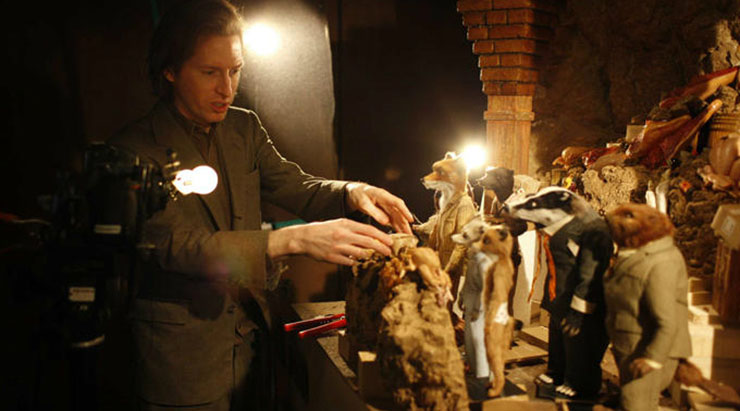 Wes Anderson on the set of Fantastic Mr. Fox  via TheTrackingBoard

Keep this in mind as you plan out your movie. May the power of the tableau shot be with you.

What are your favorite examples of the tableau shot? Share in the comments below! 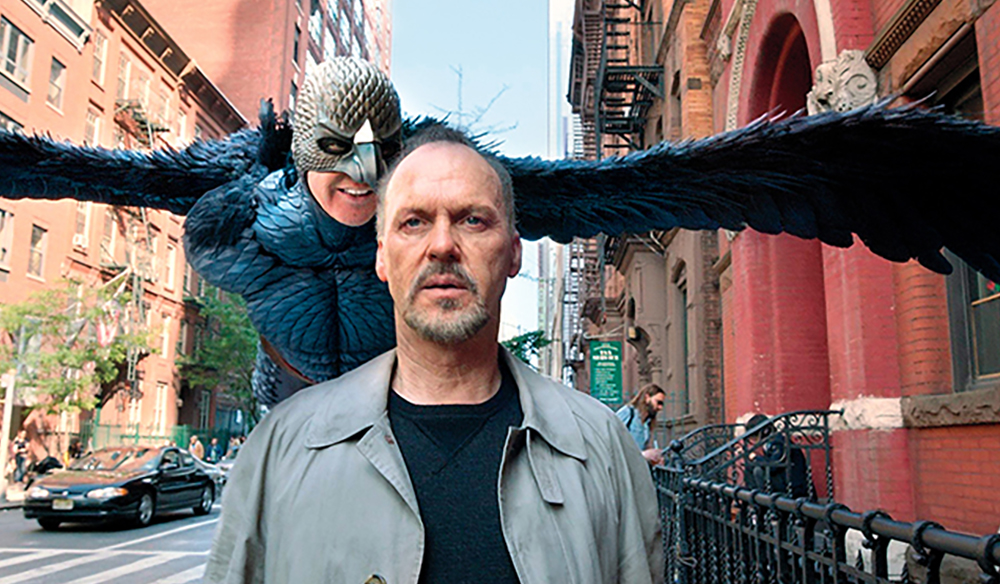 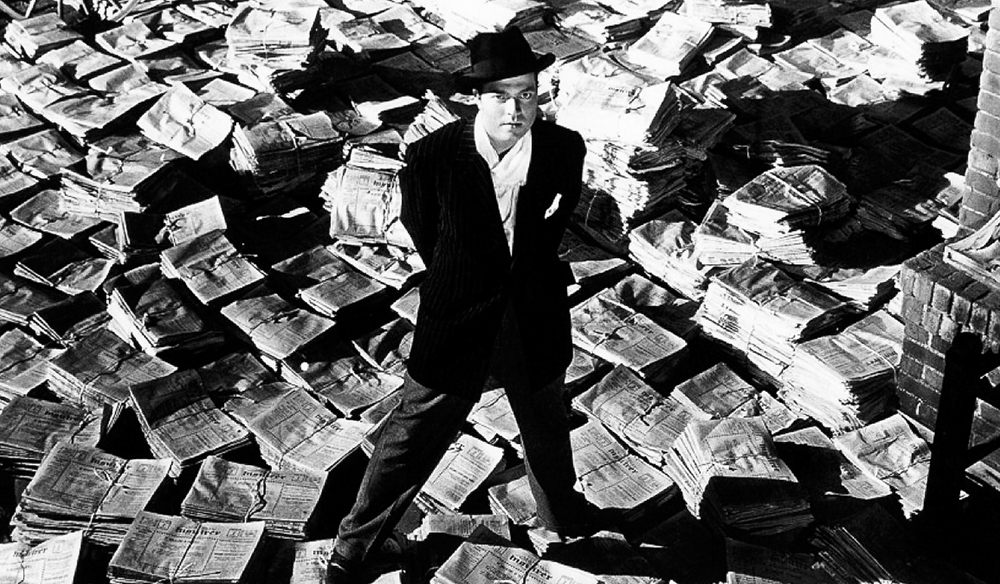 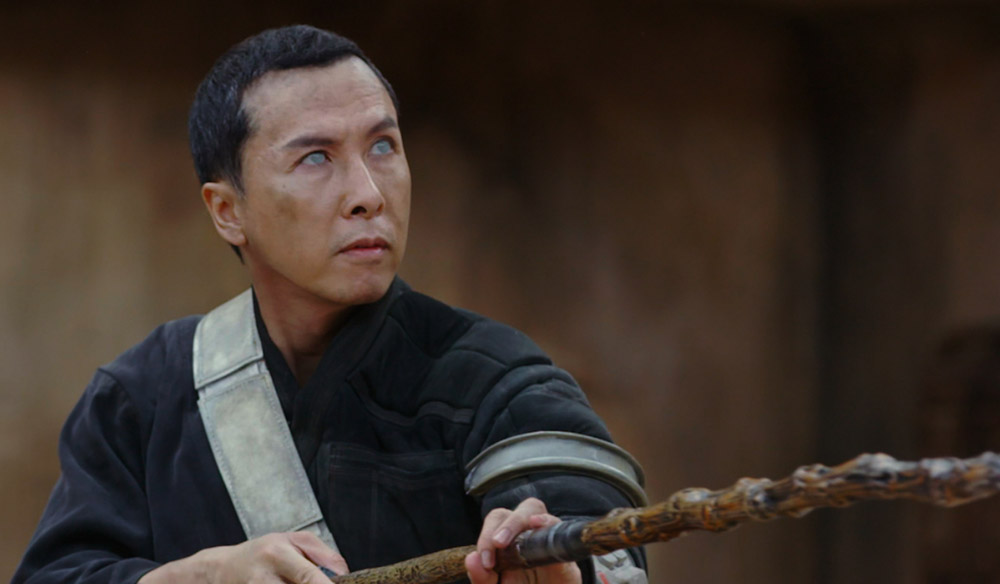 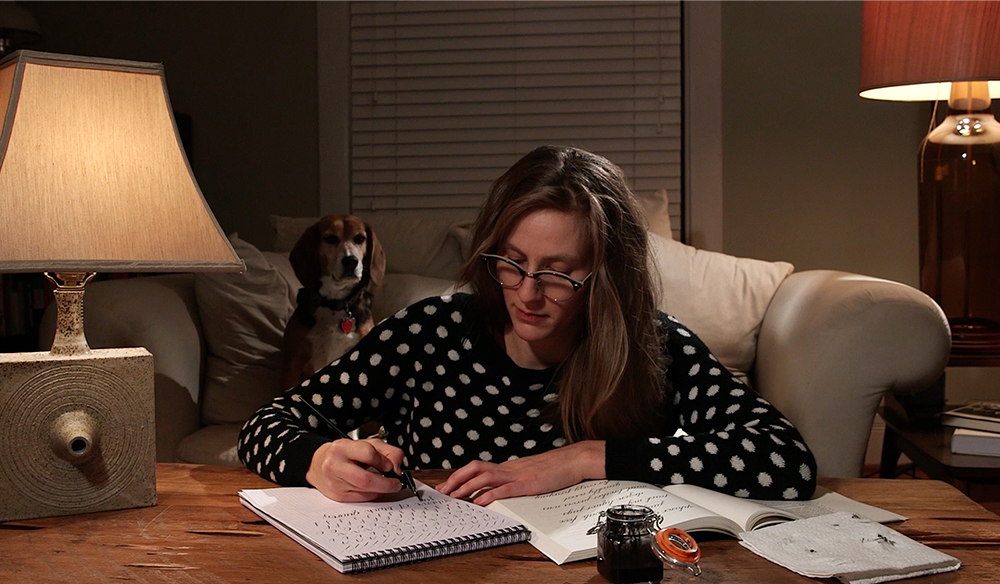