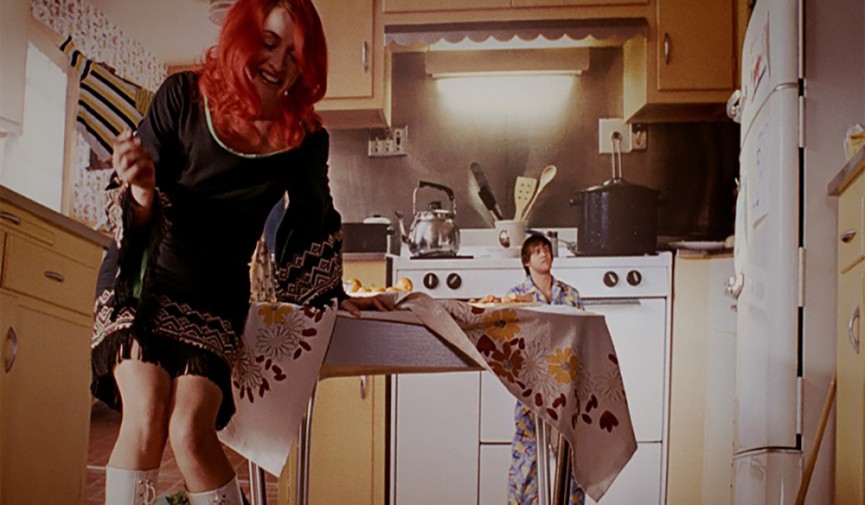 Forced perspective is an age-old practical effect with some clever applications for your own low-budget movie needs.

What is Forced Perspective?

Forced perspective alters our perception of scale and can change the perceived size of objects within a shot. The effect comes alive by way of strategically staging individuals and objects in the foreground and background of your shot along the z-axis, which runs from the perspective of the camera outward.

Eternal Sunshine of the Spotless Mind via Focus Features

An optical illusion called the Ames room is a great way to understand how forced perspective works. By using a distorted, trapezoidal room, the people within the room seem to be of varying sizes. 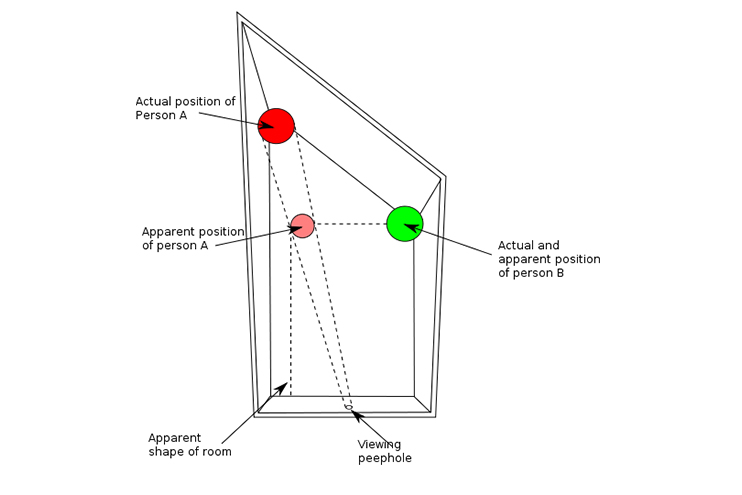 How Is Forced Perspective Used?

While it may not be a convincing use of the effect (and it’s not supposed to be), a humorous use of forced perspective can be found on The Kids in the Hall with the “Crushing Your Head” skit:

The Kids in the Hall “Crushing Your Head” via CBC

For the budget conscious moviemaker, forced perspective allows the integration of miniatures into a shot in a way that visually transforms them into life-sized objects. Vashi Nedomansky offers a good example of how to make a toy Hummer seem real.

If you prefer helicopters, then check out this blog post by James DeRuvo.

Photographer Michael Paul Smith has been photographically recreating the town in which he grew up, Elgin Park, by way of models and forced perspective. With miniature cars and other foreground models, Smith crafts very convincing images that look straight out of the mid-20th century. 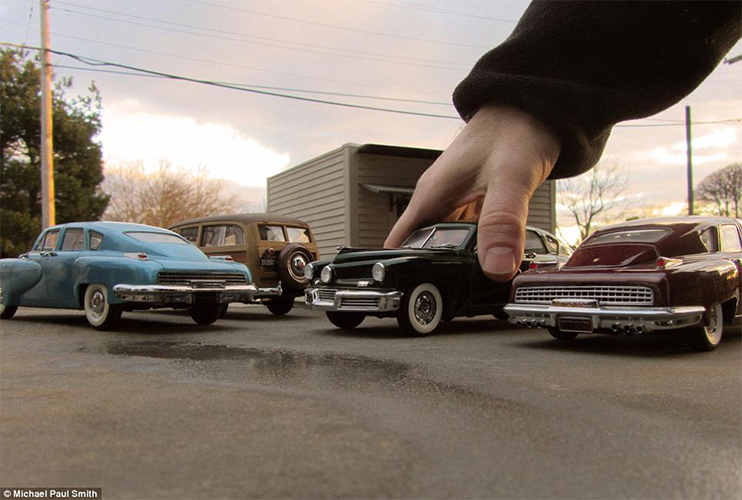 Forced perspective has been very useful in the movies when characters need to be of varying sizes. The trick is in positioning the characters within the frame at staggered points along the z-axis. The person intended to be larger will be closer to the camera while the person meant to be small should be farther from the camera. 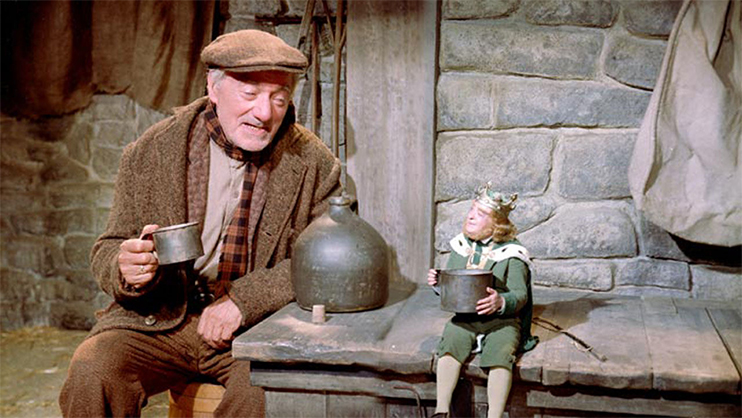 Darby O’Gill and the Little People via Disney 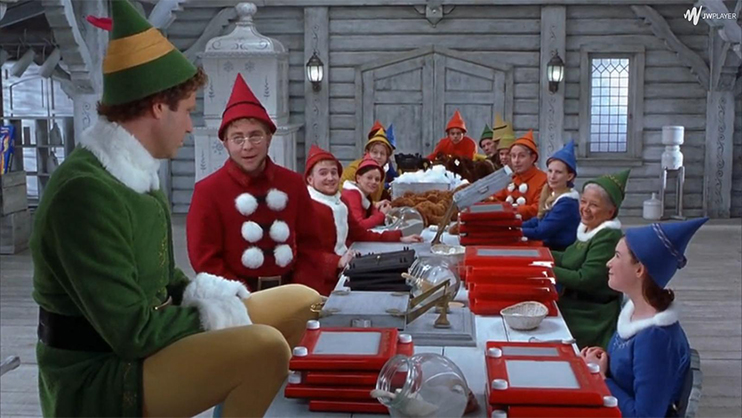 One of the main tricks is maintaining the apparent eyelines between the characters. In other words, the characters cannot actually look at one another because it would ruin the forced perspective effect. Instead, the eyeline must be simulated to accommodate the apparent positions of each character. This means that your characters won’t actually be able to look at one another, but it will still seem natural on screen.

How to Do It

In addition to being aware of convincing eyelines, you’ll need to pick the right lens. Wide-angle lenses are preferred. Wide-angle lenses will help you maintain a large depth of field while also allowing you to exaggerate the size of people and objects closer and farther from the lens. In terms of lighting, you should shoot under well-lit conditions so that you can use a smaller aperture and increase your depth of field. This way, everyone in the shot will remain in focus as much as possible. However, a little soft focus on one of the subjects can still work: 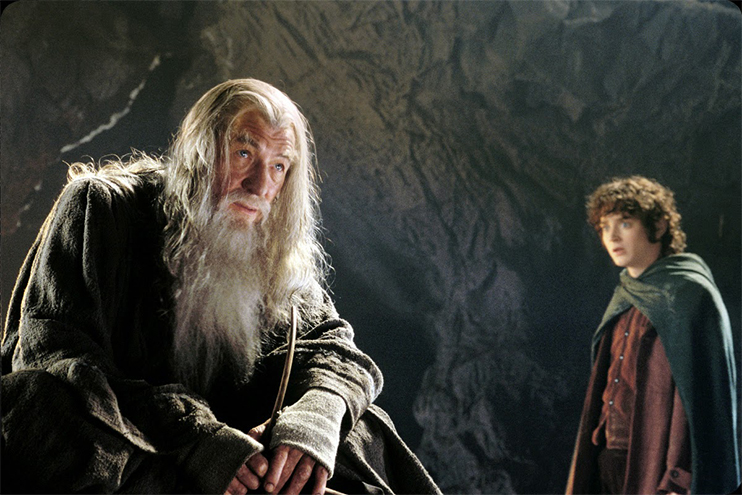 The Lord of the Rings via New Line Cinema

Whether you intend to use forced perspective as an in-camera effect or not, it’s very important to understand that the perception of scale is a constant concern in the composition of any shot. An object placed close to the camera will increase in size and, dependent on your lens choice, may look huge and unintentionally distracting, particularly if you are using a wide angle lens.

The Untouchables via Paramount

In the above shot, Kevin Costner’s hands are as big as his head. Director Brian De Palma, and his cinematographer, Stephen H. Burum, knew what they were doing, but it’s important to be aware of the ways forced perspective may disrupt your own cinematic vision. Purposeful composition is always important. 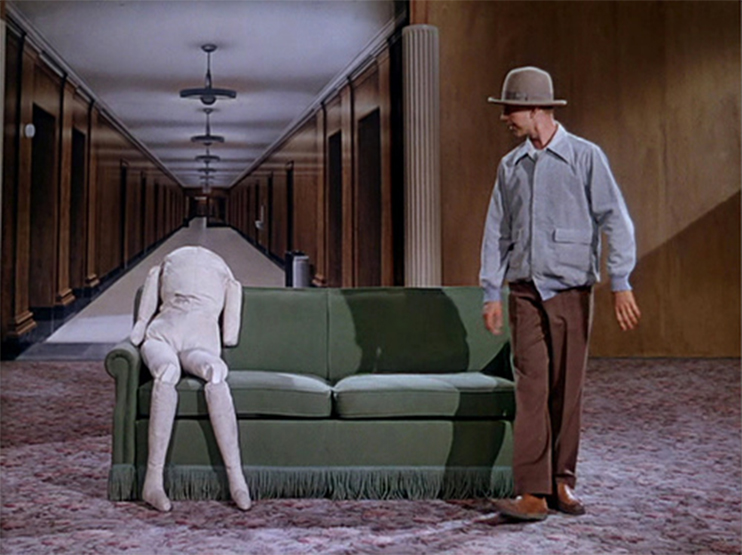 Singin’ in the Rain via MGM

Tromp l’oeil, which translates to “deceives the eye,” works by the same principle as forced perspective, except in this case, a painting, often a matte painting, is placed close to the camera (In the olden days, matte paintings were also combined optically during post-production). Tromp l’oeil has been used by the likes of Chaplin and many others over the course of cinematic history.

Though tromp l’oeil has gone out of style in modern moviemaking due to computer generated technology, Roy Andersson still uses these practical cinematic techniques in his films. 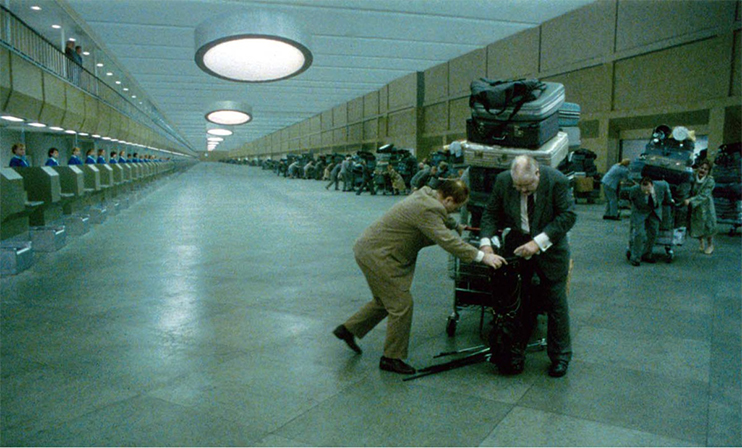 Songs from the Second Floor via New Yorker Films

Whether you are integrating models or characters of varying sizes into your movie, understanding forced perspective can help you achieve some fantastic in-camera effects. Forced perspective can also save you from creating unintentionally distracting visuals by placing objects too close to the lens.

What are your experiences with forced perspective? Please share below.