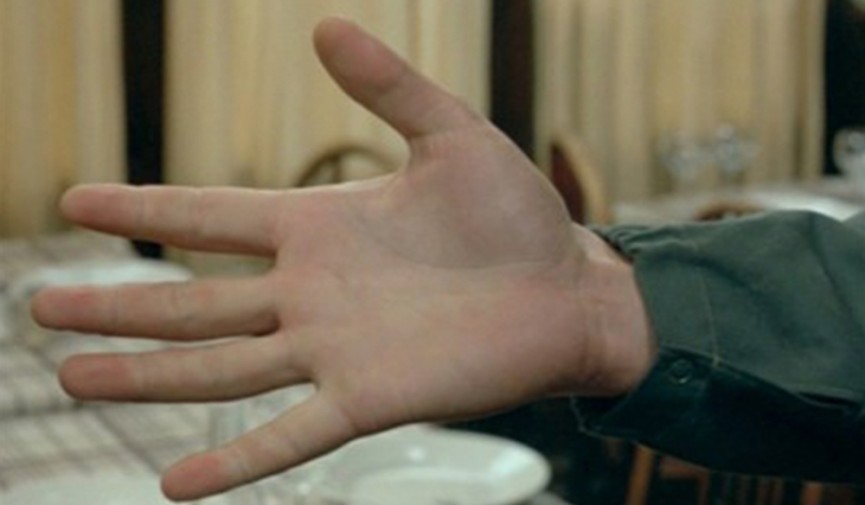 Gutter Editing and the Uninflected Shot

Here’s how to use the juxtaposition of uninflected shots and the gutter between them to make a compelling edit that keeps your viewers actively engaged in the storytelling process.

What is ‘The Uninflected Shot’?

In his famous 1988 book, On Directing Film, David Mamet points to the uninflected shot as the crucial building block of cinematic storytelling. An uninflected shot is the opposite of a tableau shot, and contains a minimum of visual information. A shot of a hand, a spoon, a key, and a face can all be classified as uninflected. 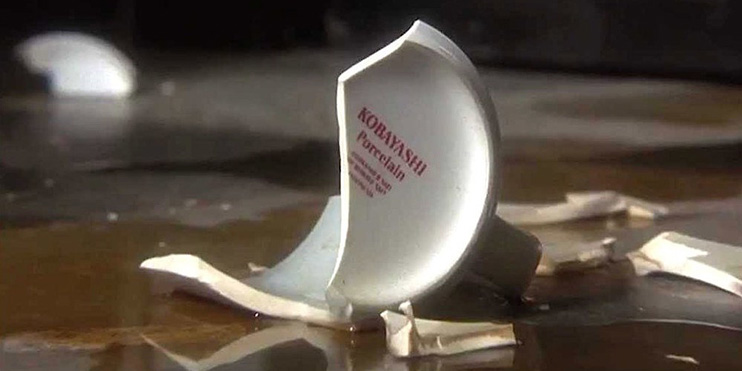 The Usual Suspects via MGM

When an uninflected image is paired with another uninflected image, the association elicits meaning in the mind of the viewer. Mamet considers this type of editing to be more effective than turning to a Steadicam shot or single take that merely follows characters and waits for something interesting to happen. Using the juxtaposition of uninflected shots is editing 101, but is so inextricably linked to the medium of film and video that it often gets taken for granted, and remembered only for its flashiest moments.

This famous graphic match in Stanley Kubrick’s 2001: A Space Odyssey is a juxtaposition of uninflected shots. But the bone isn’t simply a bone. It’s just become an important tool, something we wouldn’t know without the shots and ideas that preceded it.

Any shot of a single thing can qualify as uninflected. However, the problem with uninflected shots is that they easily slip into inflection, which is to say that they carry more meaning than the most simplified and stripped down classification.

This leads us to Sergei Eisenstein’s concept of intellectual montage, which works when the latent meaning in a shot is awakened through the collision with another shot. This shot collision is a conversation between images that gives rise to new meaning in the mind of the viewer.

Intellectual montage can get pretty intense, especially when text gets thrown into the mix, as evidenced in the overwhelming assassin training video in the Parallax View (1974):

Lev Kuleshov, Eisenstein’s teacher for a short period of time, was another early Russian filmmaker, theorist, and a crucial experimenter with the idea of uninflected shots. He conducted a well-known experiment known as the Kuleshov effect wherein he paired three sets of static, uninflected images. Each set included the face of a man, Ivan Mosjoukine, with a separate uninflected shot. 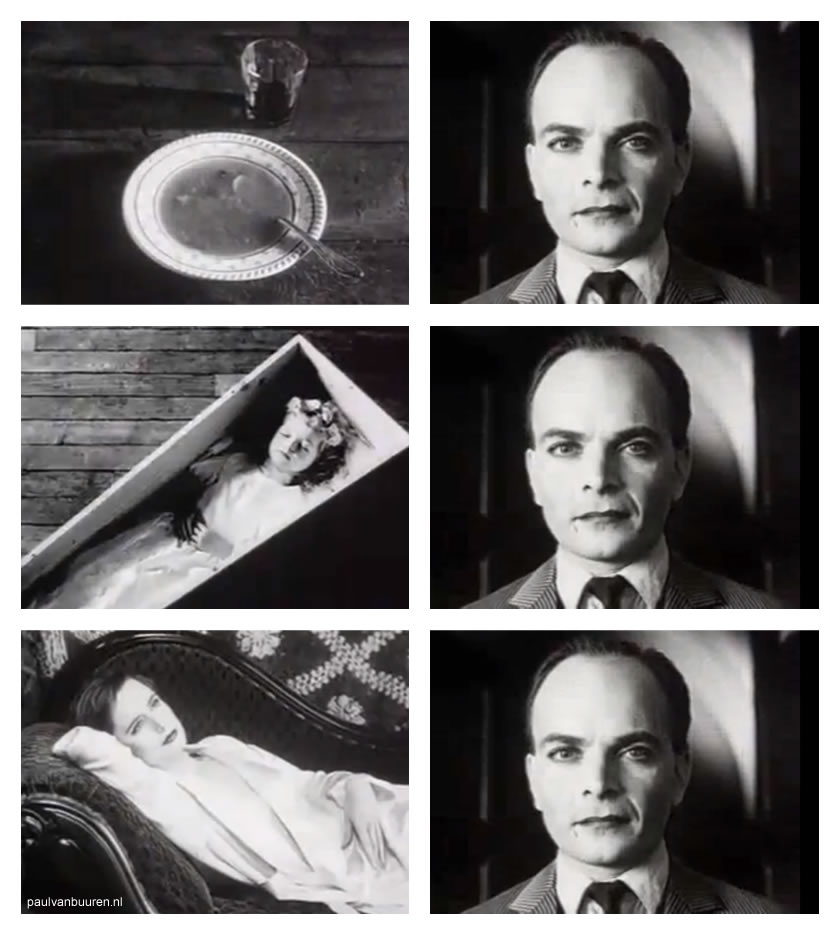 The first pairing suggests hunger. The second suggests sadness. The third suggests lust. The decoding process and resulting association of the images is left to the viewer, who actively fills in “the gutter,” or space between the images, with meaning.

Scott McCloud explores this idea of “the gutter” in his book, Understanding Comics. While the book is primarily about comic and graphic art, there are many filmmaking correlations. McCloud discusses the use of “the gutter” as a way to actively involve the reader, and in the case of movies, the viewer. 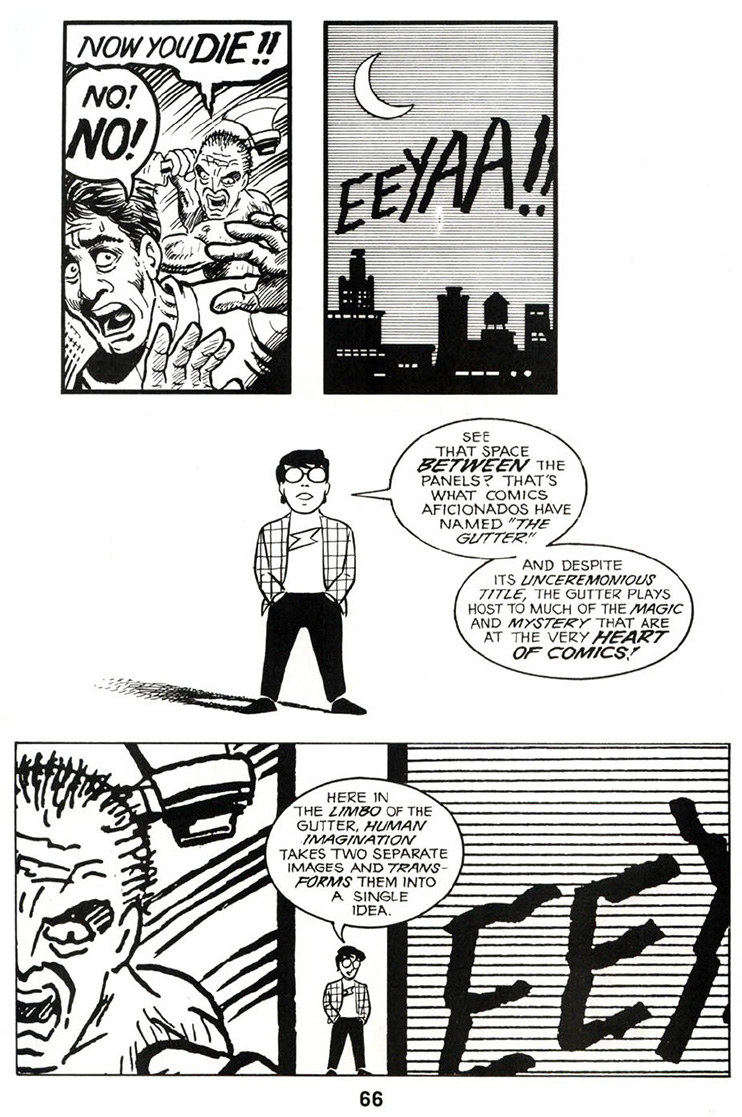 from Understanding Comics via Scott McCloud

While the image of one man swinging an axe at another man is not the most uninflected image, it does function through an important omission. The juxtaposition with a second image containing a skyline and shriek compels an association on the part of the reader, who completes the act of killing merely suggested by the two images. The famous shower sequence from Psycho (1960) works by way of a similar principle.

Using the gutter is about leaving out information and entrusting your audience to fill in the gap. It’s about visual restraint and building narratives through simplicity. After all, the narrative power of any material is only as good as its ability to elicit involvement on the part of your viewer.

Brevity and precision in shot selection and juxtaposition is like iceberg storytelling. Hemingway’s six-word story (even if it may be an urban legend) is an example of the literary power of the uninflected shot: “For Sale. Baby Shoes. Never Worn.” It’s deceptively simple and yet suggests something quite powerful by forcing the reader to fill in the gutter.

As you plan out your next film or video, consider your own use of the uninflected shot. As you write your shot list and make your storyboards, consider if your shots can be simplified to elicit greater audience involvement through the power of intellectual montage.

Can you be making better use of “the gutter” between shots to actively involve your audience? With single takes and “oners” on the rise, it’s easy to forget the effectiveness, and affectiveness, of a good old-fashioned cut. It doesn’t take a lot of time. It does take some planning, imagination, and a little bit of trust in your viewers. 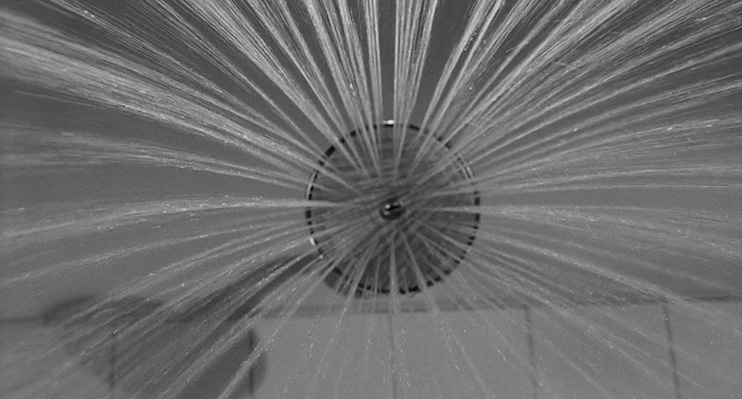 What are your favorite examples of uninflected shots in film? Please share them in the comments below!