These simple shortcuts can save you a TON of time in your edit bay. Take the time to integrate them into your editing workflow.

Keyboard shortcuts are the key to faster editing. The more you memorize the faster and more fluid an editor you’ll become. The beauty of being able to fully customize the keyboard shortcuts in Premiere Pro CC is that each editor can piece together a set of shortcuts that fit them like a glove.

I’ve also previously posted 5 Keyboard Shortcuts I Can’t Edit Without, which I would wager are also worth adding into your toolset!

I was recently working on a project that involved adding a lot of text elements. I soon discovered that by default Premiere does not have a keyboard shortcut for ‘Add New Title Based On Current Title’.  This is a very handy little function that creates a new title, based on the currently open title, maintaining all the formatting, fonts and text that existed in the previous title. By default a new title in Premiere Pro is mapped to CMD+T. I have my new title mapped to CTRL+T, so I mapped new title based on current title to CTRL+SHIFT+T. For memories sake, I would suggest mapping it to something related to that T keyboard shortcut. Just remember: T for Title.

As a Final Cut Pro 7 editor I was used to pasted items appearing on the same tracks as the ones from which they were copied. But because of the way in which copy and pasting works within Premiere Pro CC, in which the activated tracks are far more important to getting things in the right place, mapping some shortcuts to toggling tracks on and off becomes more important. 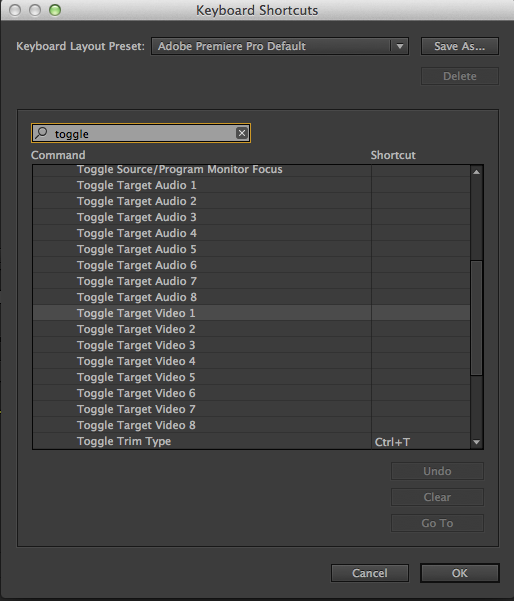 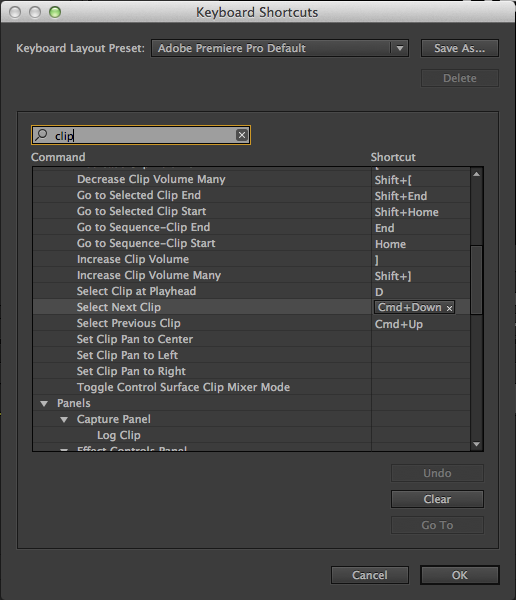 When you are colour grading within Premiere Pro, or adding an other effects to a lot of clips for that matter, it can be very time consuming to have to keep moving the mouse backwards and forwards between selecting a clip with the mouse in the timeline panel (to see it’s parameter settings in the effects panel) and moving back to the effects panel to change a particular parameter. Helpfully (and this time by default) Premiere Pro CC does have a keyboard shortcut for selecting the next and previous clip in the timeline which is CMD+DOWN ARROW and CMD+UP ARROW.

You’ll also need to use SHIFT+3 and SHIFT+5 to switch between activating the timeline and the effects panels. The most useful implementation of this shortcut is when you’re checking through a final grade to make sure each clip has the settings it should, and you want to blast through the timeline, hammering on CMD+DOWN ARROW.

Hit the comments section with your favorite time saving shortcuts and share some editing wisdom with the rest of us!