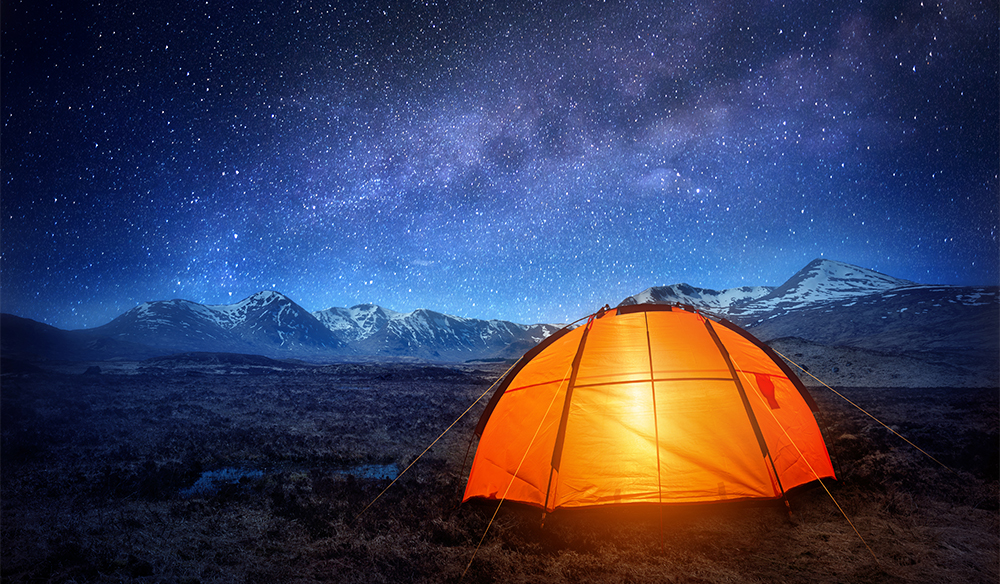 Three Ways To Light A Tent Scene On a Low Budget

Lighting a scene inside a tent can be a real challenge, but we have the solution. Check out these tips to make your next tent scene shine.

Lighting a tent scene is no easy task — it’s quite . . . in-tents. Ok, that was a terrible dad joke, but in all seriousness, lighting a scene inside of a tent is quite problematic. We’re not talking about large wedding tents that can hold a host of people, or Roman military-style tents in Game of Thrones. This is about filming a scene in a typical 2-3 man camping tent. A tent is a cramped space, there’s usually little to no lighting (save for a lantern), and it’s usually at night. Those, it’s safe to say, are not ideal shooting conditions. Especially when working with a low budget.

Let’s have a look at some of the methods to solve the problem.

First and foremost, while your character may out in the great outdoors, you can just stay your garage. Let’s face it, setting up and taking down a tent is usually the most stressful part of a camping trip, and it’s going to be an unnecessary burden to lump together interior and exterior scenes of the tent at the actual location. (Further, the sound of the tent material rustling in the wind will wreak havoc on your audio.)

Practical lighting is going to give you the best results inside of a tent. Roll back the clock forty years, and an old Coleman camping lantern would only barely illuminate a large tent. Today, however, we have inexpensive LED lamps that can light up an entire tent like a Kino fixture. The Fenix Flashlight CL25R LED Lantern is a lantern with four different brightness settings, which gives you a bit of flexibility when shooting. However, the primary point of using a practical is that you can then use that light as a source of motivated lighting.

For example, in the following still from British show The Inbetweeners, we see the four characters are out camping, lit by a typical camping lantern. 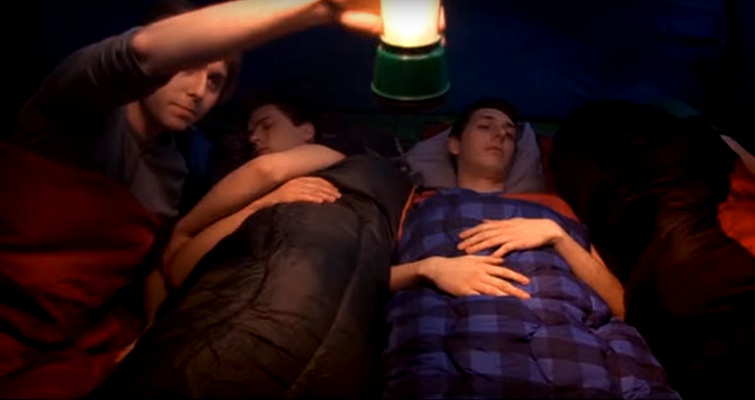 In the scene, one of the characters gets up to turn off the lantern, and it would appear that the lighting technician was a second too slow. For a split second, we see that the lamp was providing little to no illumination for the set, and an overhead fixture was actually lighting the scene. 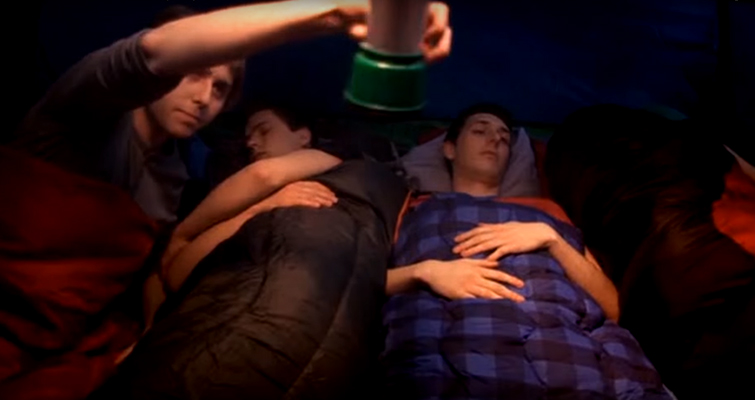 By using a practical camping light, and shooting indoors, you enjoy additional solutions to the problem of lighting in such a small space.

If you’re going to light a tent scene without an actual light source, in reality, it would be pretty dark. Of course, the shot would look atrocious if you shot it without any actual light — not even the Sony As7ii could save that shot. Therefore, instead, we can introduce a diffused/bounced light, and then in post-production performing a light day-to-night grade. As before, this approach will work better in a controlled environment rather than out in the wild. You can see this method in action in Twilight: Eclipse. 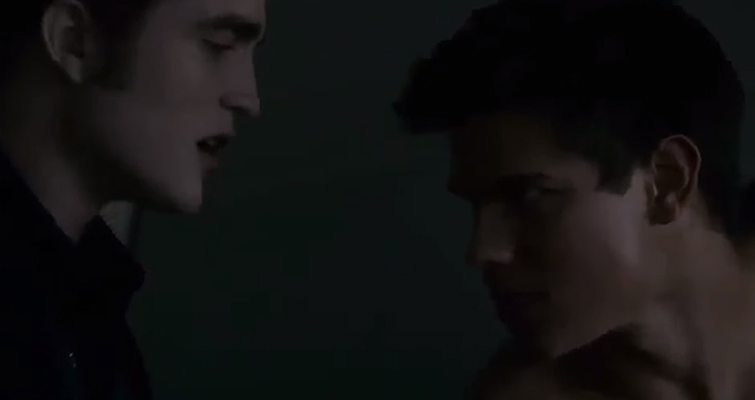 Please forgive me for using Twilight as an example, but scenes filmed inside of a tent are uncommon, and finding behind-the-scenes of a tent scene is even rarer. As we can see from the BTS still below, it looks like the light is directed toward and through the lower portion of the tent. 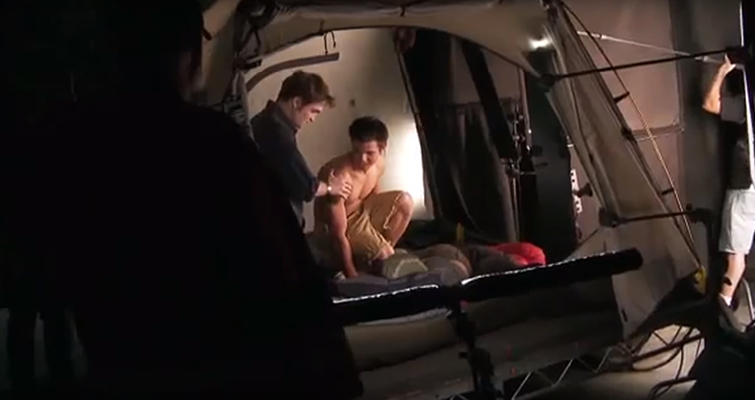 This is great because not every low budget filmmaker is going to have a C-stand and a set of diffusion silks at hand, but since most tents are made out of a translucent material, we can, to some extent, use them as a diffusers for our light when shooting a dark scene. As long as there are no hot spots on your actor, and the light is soft, you’ll can successfully grade the shot later, so it looks like your character/s are in a dark tent with no light.

The final method for low budget shoots is to let your characters fall into darkness, and light the exterior of the tent as if moonlight or a campfire were illuminating it. This is a tried-and-true method that you’ll often see employed in feature films. That being said, from here on out, you will no longer be able to watch a film without noticing that the exterior of a tent is wildly illuminated compared to the shots that took place outside. 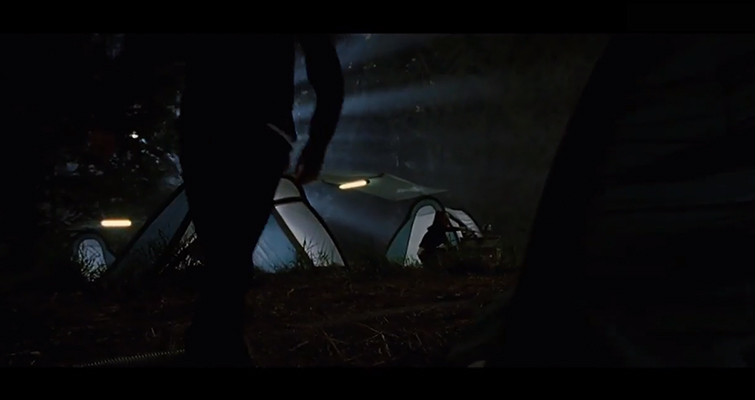 In the still above from X-Men 2, Bobby has just set up an inflatable tent, and aside from the spotlight bursting through the woods to indicate moonlight, it’s relatively dark. 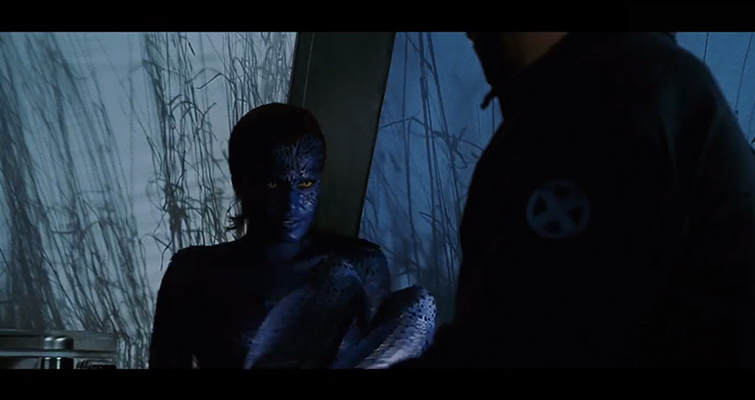 However, when we move inside of Logan’s tent, we can see the outside light is so bright that’s it’s projecting shadows. (I’m sorry for ruining future tent scenes for you.) While you’re intentionally going to be directing light towards the tent exterior, we want to avoid lighting the tent itself. You want to light the surrounding areas with a hard light, so your gobos, cookies, or plain tree branches form nice elongated shadows on the exterior of the tent. This, in turn, will softly illuminate the interior of the tent while producing shadows on the outside.

Alternatively, if the scene calls for it, you can have the light of a flickering fire performing the same technique. However, before you accidentally burn your garage down, remember you can achieve the campfire effect with a flicker box — a method that we discussed in Tips and Tricks for Harnessing the Lighting Power of Fire.

Lighting the inside of a small tent is a challenging task, and there’s certainly nothing wrong with just using a standard LED camping lantern if that’s all your budget permits — it may even produce greater results, depending on your scene. However, if you have space available, you may get better results by using one of the methods listed above.

Looking for more lighting solutions? Check out these articles.