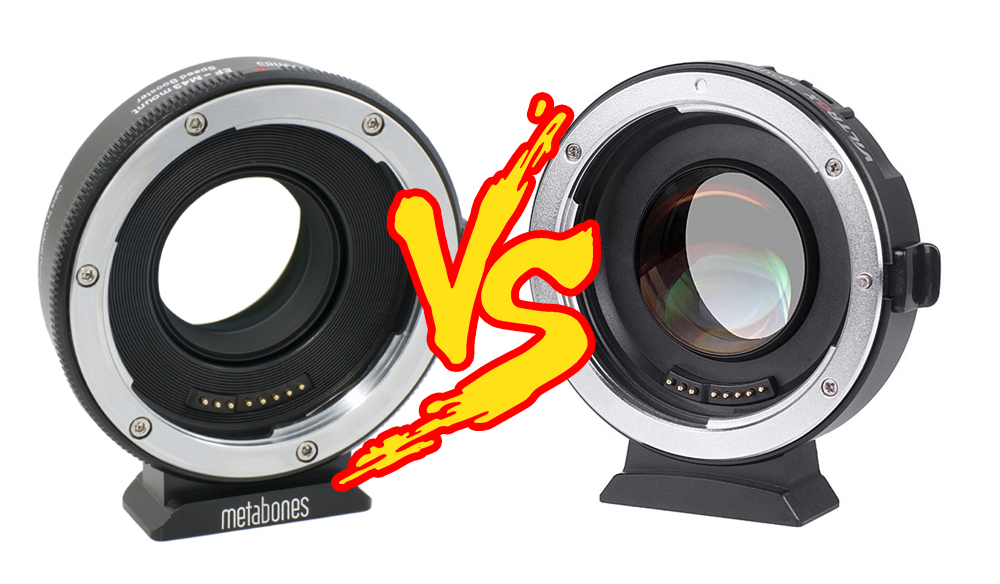 Next in our ongoing series of Blackmagic Pocket Cinema Camera 4K guides, we’re taking a look at the world of Speed Boosters.

Although “Speed Booster” is a registered Metabones trademark — much like Velcro, Sharpie, and Hoover — the name Speed Booster has now become synonymous with all mount adapter brands that improve lens speed.

The Pocket 4K houses a micro four-thirds mount, primarily used by Panasonic and Olympus, which is perfect if you’ve upgraded to the Pocket 4K from the Lumix line. However, if you have migrated from another camera system and don’t intend on replacing all of your lenses, you’re going to need a mount adapter. There are plenty of (dead) mount adapters on the market (for under $50) that will allow you to transition your Nikon lens to an M4/3 mount, quickly. (But this usually means losing access to all lens electronics, correct focal distance, and full sensor coverage.) Therefore, I’m solely going to be looking at which Speed Booster is the perfect adapter for your Pocket 4K.

At the moment, there’s a battle between Metabones or Viltrox. Well, actually, I’m not going to waste your time. The Metabones M4/3 Speed Booster wins. The renowned brand was always going to beat the budget counterpart. You get control over all electronic lens functions, they’re well built, and they boast impressive image quality. Of course, this isn’t even acknowledging what Speed Boosters are known for — focal reduction and increased lens speed.

At this point in time, there isn’t a Pocket 4K-specific Speed Booster on the market. Adapters for EF/Nikon/Sony to M4/3, yes. But not for the Pocket 4K. If you have recently visited the Metabones website to find adapters that are compatible with the Pocket 4K, there are three announcements relating to the camera. 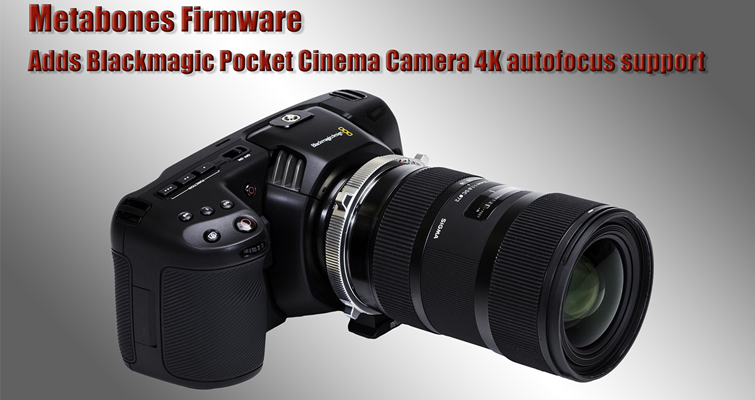 Do you know that popular .gif from The Hangover where Alan is counting cards?

That’s how I felt when I was digesting that information — because on the surface, everything contradicts everything else. It’s only when you break it all down that you see three separate adapters are being highlighted. Let’s take a look at the announcements.

Metabones® releases firmware version 3.1 today, adding autofocus support to Blackmagic Pocket Cinema Camera 4K. The intent is not to replace, but to supplement focus-pulling in cinematography. There is no continuous autofocus, but one-shot AF is activated by pressing the focus button on the back of the camera. It may take a couple of seconds or more to lock, and if used during filming will cause visible disruption in the footage. Use it before recording commences and we recommend manual focus during recording.

I cover this feature fully below, but briefly, the Pocket 4K, when connected with the EF to M34, would only be able to control the aperture, not the focus assist. The latest firmware update will now allow you to use the focus button on the pocket 4K. Be sure to download that if you’ve recently acquired the EF to M43 Metabones Speed Booster.

In the coming months, we’ll see a Metabones Speed Booster specifically designed for the Pocket 4K. And, when choosing a Speed Booster, it’s important to note that the original BMPCC Speed Booster will not work on the Pocket 4K. However, both cameras house an M4/3 mount, so why not? Well, the original pocket cinema camera houses a super 16mm-sized sensor, which is inherently smaller; therefore, it won’t correctly cover the size of the sensor.

While I would recommend opting for the Metabones Speed Booster, or at least waiting until we can review the Pocket 4K Speed Booster in the future, not everyone has an extra $650 to spare for a lens adapter. That’s almost the cost of the camera itself, and there’s no harm in working around the limitations of a budget accessory, so let’s see what they are. 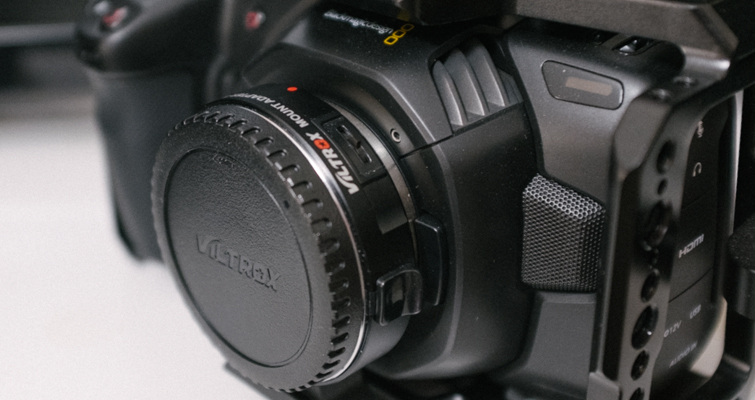 If you’ve yet to get the Pocket 4K, and you’re researching what else you need to purchase before you do, it’s essential to know that the camera doesn’t have continuous autofocus (as pointed out in our review). It’s a cinema camera, after all. However, it does have autofocus assist, where you can tap the focus button on the back and have the camera focus onto the area of attention. It’s useful when you’re shooting wide open in a daylight situation and you can’t quite tell if the focus peaking is where you need it — say, the center of a flower. You can quickly hit the autofocus button and, perhaps, get better focus. The problem, however, is that this feature initially only worked with native M4/3 lenses.

As we read in the Metabones EF to M4/3 update, this feature now works with this Speed Booster, but it’s still unavailable on the Viltrox EF-M2 II. However, the Viltrox EF-M2 II didn’t initially support the function to control the aperture either. They have since remedied this in the 3.3 firmware update. Therefore, we could perhaps gamble and say that Viltrox may feature this in the future. But again, this camera does not have continuous autofocus, and in all likelihood, you’re not going to need the use the lens’s autofocus control.

One of the initial drawbacks to the Pocket 4K was the absence of IBIS (In Body Image Stabilization). Many filmmakers felt that you’d be left with mediocre results if you were to combine the Pocket 4K with an older lens that also didn’t have IS. Users were worried that the slightest handheld movement would look jarring. Whether or not users still feel like that’s an issue, there’s an apparent issue with the Viltrox not recognizing the lens’s IS control.

As Mattias Burling reports in his video above, he was only able to get the Tamron lens IS control to work with the Viltrox EF-M2, if he downgraded the firmware to 2.3.

What type of lenses are you using? If there are vintage lenses or lenses that accommodate manual iris control, then there’s little need to buy an adapter that boasts the use of electronics, as it’s just going to rack up the price of the adapter. However, I know many URSA users (like myself) who have acquired a Pocket 4K to complement the URSA as a B-cam. As such, you’re going to need a Speed Booster if you’re using lenses with an electronic aperture.

The Viltrox can control a lenses aperture out of the box, but from the Blackmagic Pocket Cinema Camera 4K Facebook group, several users are suggesting that there’s a bad batch of Viltrox adapters floating around the marketplace, as many users have to replace their adapter due to lack of iris control. There doesn’t seem to be an official fix if your lens stops responding to the adapter. However, a few Pocket 4K users on Reddit have discussed a few fixes.

I’ve had the same issue with the exact same Viltrox. The only solution is to remove the adapter and reattach it until it reads it again. As soon as you turn off the camera though, you might have to do that same process over and over. I definitely wish I hadn’t bought this adapter.

Thought it was just me. I was in heaven. Worked. Then updated. Did not work. I just updated again today to the latest. Worked for three seconds. I am going to go back to the original firmware. A lot of people having luck with that.

Perhaps the most crucial element of buying any peripheral that’s going to sit between your lens and your sensor is the quality that it will produce. Or more correctly, how it will affect the quality of the image. Again, like the aperture control issue, there seems to be a hit-or-miss consensus with the quality of the Viltrox adapter. The effects include a soft image, aberration, distorted bokeh, and hazing. In the video below, Thomas Shomo shares his experience working with the Viltrox EF-M2.

Bluntly named “Viltrox EF-M2 for Blackmagic Pocket 4K: Why You Shouldn’t Buy It,” Thomas certainly demonstrates some issues that can cause headaches in the long run. Unlike many other videos that have expressed dissatisfaction with the Viltrox EF-M2, Thomas also compares the imagery with a Metabones adapter so we can compare the results. 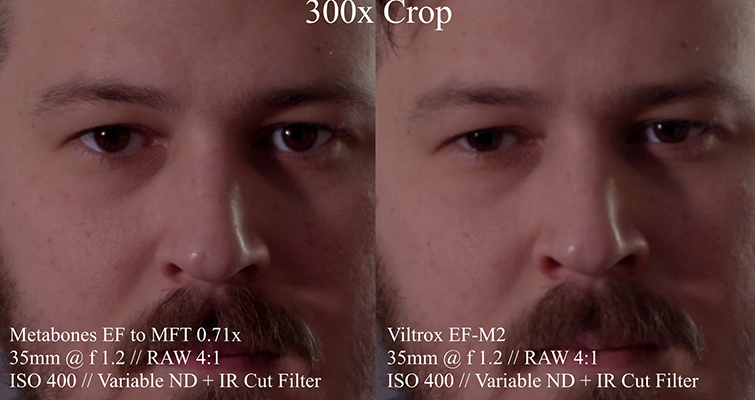 You can see a drop in sharpness when using the Viltrox. This is primarily where the extra bucks go when you’re paying for a Metabones Speed Booster.

After reading the article above, it’d be easy to think I’m just going to save for a Metabones Speed Booster. But if you’re on a budget, you can work around the issues of the Viltrox adapter. In this video, Areia Creations introduces a few solutions to some of the visual problems caused by the adapter, such as adding cloth to the inner housing of the adapter to stop the flaring, or adding tape to the back of the adapter for a more snug fit against the Pocket 4K. There are always workarounds to budget accessories.

I remember in 2010, when I first paired a T2i/550D with RØDE’s first video mic, the automatic gain control from the camera was so awful, it made listening to dialogue unbearable. And to fix this (following Dave Dugdale’s advice), I had to download a 19kHz sinewave tone to my iPod, buy a y-splitter cable, and have the tone fed to the right channel and the video mic to the left channel. In post, you’d then have to disable the right channel and replace it with the microphone information from the left channel. The process was tedious, sure. And I didn’t get the same quality audio as I would have recording into a separate field recorder. But I didn’t have the budget for a field recorder, so I made it work.

While the Viltrox adapter isn’t going to give you the same results as the Speed Booster that costs three-to-four times as much (nor is it built as well), it’s still going to give you consistent results to work with until you can upgrade. Alternatively, if you do have the finance available for the Metabones brand, it may be best to wait until the official Metabones BMPCC4K adapter has been released.