Looking to optimize your After Effects skills?  Here are 10 more After Effects tips that will save you time and let you work more efficiently!

Our previous post on 10 Time Saving Tips in After Effects was quite popular, so I’ve rounded up 10 more tips for editors learning After Effects.

If you’re using an Adobe based post production workflow, Premiere Pro & After Effects connect easily via Dynamic Link and Import (links to previous blog posts on this feature). Now, let’s take a look how to get your projects from other video editing apps into After Effects:

Final Cut Pro X to After Effects: There are 2 choices (free and paid). Clip Exporter is a free app you can get hereXto7 for Final Cut Prois $49.99 and developed by Assisted Editing, which make a variety of editing helper apps.

Post Haste is a free app that that allows you to setup file and folder templates for your projects. It offers a variety of templates (motion graphics, video editing, visual effects) that you can customize. Let the computer do the tedious work like organization, so you can spend your time making cool stuff.

3. Sync Your Settings (for After Effects CC)

The new Adobe After Effects CC has a feature that allows you to sync your preferences, shortcuts and more across multiple computers.  You simply ‘login’ to your account through AE and your preferences will populate. This is huge for freelancers and those who often work in different edit suites at large companies.

See the Adobe AE Blog for the complete list and what doesn’t sync (feature that are machine-specific). 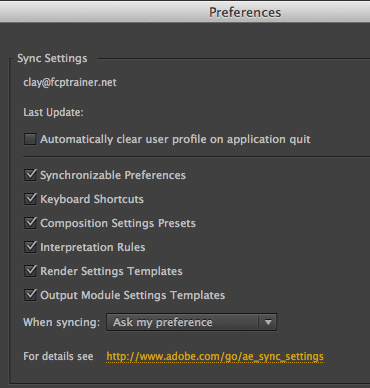 This is a quick trick to put clips in order and add a dissolve between each one (also works in Premiere Pro). Ideal for quickly creating a highlights reel or photo slideshow. You can apply ‘Automate to Sequence‘ to clips in the project or those already in a composition. 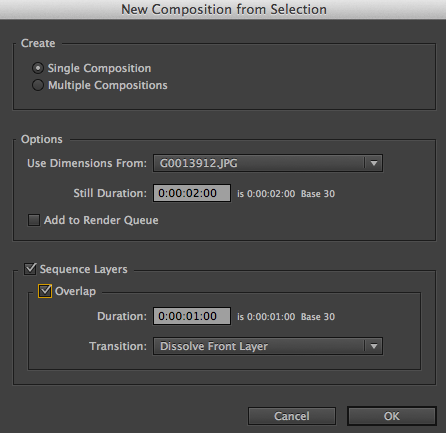 From a Composition: With the layers stacked on top of each layer, select all, right click and choose “Keyframe Assistant > Sequence Layers”.

5. Move Your Anchor Point Without Moving the Layer

An anchor point determines where a layer scales and rotates from. If you change anchor point under Transform you will move the layer. To change the anchor point without moving the layer, use the Pan Behind tool (shortcut is Y). Click on the anchor point and move it to the desired location, then press V to switch back to the Selection tool.

To make life easier, move you anchor point with the pan behind tool before you animate.

The Work Area is the part of the Composition that is previewed when you do a Ram Preview (shortcut is zero on the number pad). 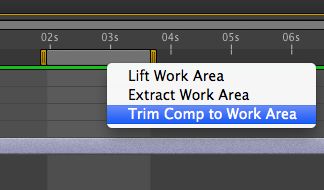 7. Working with Audio in After Effects

Pressing the spacebar in After Effects won’t preview audio like it will in a video editing app. Here’s a few After Effects shortcuts for working with audio.

Scrub Audio: Hold Command (on Mac) or Control (on PC) to move the playhead in a comp while scrubbing the audio.

Collect Files is equivalent to Media/Project Management in Premiere Pro or FCP. You may use this feature when you want to move your After Effects project and corresponding media to another hard drive.

If you want to just collect files for a particular composition, select a comp first.

A dialog box will appear. Click “Collect” to set a destination, then name your project that will be moved with the media and click Save.

10. Add to Media Encoder Que (for After Effects CC)

The advantage of creating video files in Adobe Media Encoder is that it has a wide range of presets to choose from (Vimeo, Youtube, Phones/Tablets). 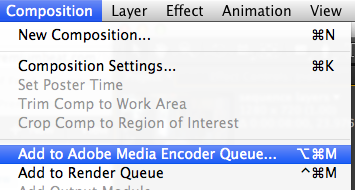 Got an After Effects quick tip to share?
Let us know in the comments below!