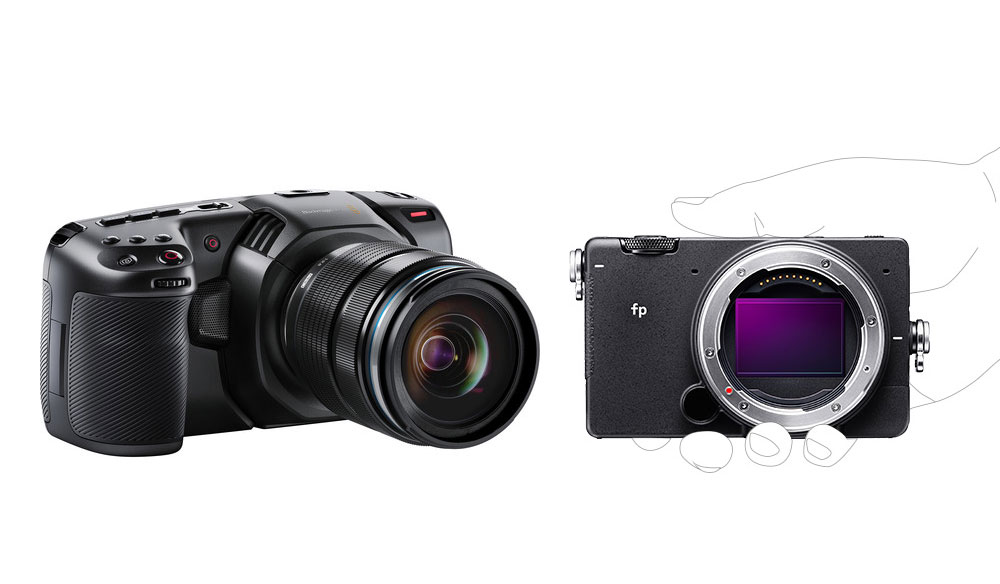 The BMPCC 4k and the Sigma fp have different strengths and weaknesses, so which one do you need for your next project?

Since its April 2018 release, it’s fair to say that the Blackmagic Pocket Cinema Camera 4k has had one of the most successful camera launches in recent memory. The low price and great Raw capabilities of the camera quickly made it the go-to for many entry-level shooters, replacing Canon’s and Sonys DLSRs. With the big manufactures trying not to undercut their profitable cinema cameras, it was left to the upstart Australian company to bring something to market that was truly disruptive, and they they reaped the benefits of that risk.

But Blackmagic doesn’t have a monopoly on disruption. Sigma, a Japanese company known mainly for their lenses, just introduced the Sigma fp, a full-frame cinema camera capable of 4k Raw video. How do the two cameras stack up against each other? Let’s take a look at some key metrics.

Both cameras are capable of producing high-quality Raw images. I didn’t see much difference between dynamic range, color, or sharpness. The sigma claims 12.5 stops of dynamic range, while the BMPCC claims 12. Despite being 4k and not 6k, the Sigma image has slightly more detail than the Blackmagic 6k and noticeably more than the Blackmagic 4k, no doubt due to the larger sensor.

No contest. The sigma has a larger sensor, and you’ll get much more out of your lenses. The fp is also capable of cropping into a s35 size to use APSC lenses, or to record the full sensor size at lower 2k resolution.

The Blackmagic cameras have more options here, as well as the edge on playback. It shoots a compressed Raw format at varying compression rates that is much more versatile than the Sigma’s cinema DNG files. It also has prores in 4 different flavors. As of this writing, the Sigma fp can’t play back its raw footage in camera — you’ll need to import it into a computer to see what you’ve shot. The fp has two varieties of .mov recording to the internal card. Both are 8-bit 420.

The Blackmagic Pocket hasn’t fit in anyone’s actually pocket since they increased the body size. The Sigma fp, on the other hand, is tiny. But there’s a catch — one reason behind the small form factor is that the Sigma fp doesn’t compress the images at all. It outputs the sensor readings as images to an external hard drive like the Samsung T5. This means it producers less heat and needs less computing grunt, but you’ll need a lot of drive space to store the Raw files until you can process them into usable footage. Luckily, SSD media is among the cheapest out there, and you can get a 1 terabyte T5 for $150.

This has long been one of the biggest limitations of the BMPCC, with some users of the 6k needing a dozen batteries to make it through an eight-hour shoot. Most have invested in external power solutions, like a cage with a connected V-mount. The Sigma is much better with battery life because it’s not processing the Raw to the same extent, and I got one hour and 45 minutes of raw recording on a single, tiny battery. One drawback is that the Sigma doesn’t include a battery changer with the camera, so you’ll need to buy one or use the USB drive to charge it.

The Blackmagic Raw files open very happily in Blackmagic’s Resolve Studio software (included). You can do a bunch of clever things like change the ISO in post. The Sigma DNG files also open in Resolve, but you’ll need to link them to their corresponding audio tracks, stored on a different part of the hard drive.

While the Blackmagic cameras definitely have the edge here, I was able to build a workflow and design some LUTs for the Sigma camera in very little time. What may look like a hurdle to overcome quickly becomes a quick step in post-production.

The BMPCC is a clear winner here. Not only does it have a 3.5mm stereo import, it also features a mini XLR and headphone jacks. The Sigma, because of its tiny size, has only a 3.5mm imputes and lack a headphone jack. You can monitor the levels on the screen, but you can’t check the quality of the audio from the camera.

Since the BMPCC has been on the market for a while now, there are a ton of available accessories, like cages and power options. Most of these work with both the 4k and 6k variants, since the mount depth is the only difference. The Sigma is still waiting for more support from manufactures, but both SmallRig and Taipan Cinema are producing compatible cages.

Other camera platforms have a lot going for them and can produce great images in the right hands. The Blackmagic Pocket is a more established camera with a lot of codec options and accessories, but it suffers from an awkward form factor and short battery life. The Sigma fp has an amazing full-frame sensor and shoots to cheap SSDs, but it has limited audio options, and there aren’t many third-party accessories available yet.

If you can live with the downsides, both these cameras have amazing potential.

Looking for more information on cinematography gear? Check out these articles.