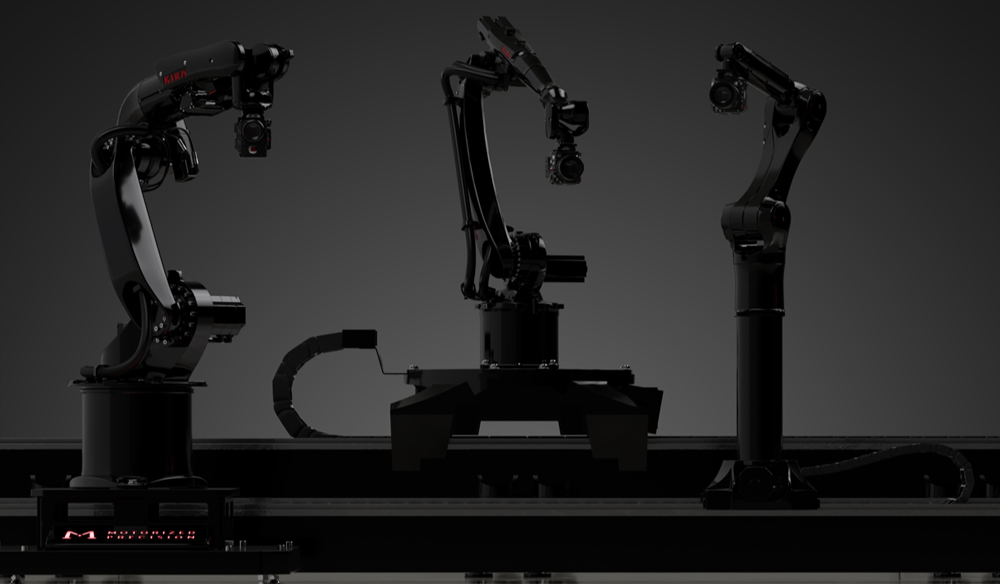 You can own the same style of robotic camera arm used to capture epic commercials and Thor: Ragnarok.

Robotic camera arms are one of the coolest devices you will ever see on set. Last year, we told you about Motorized Precision‘s KIRA robotic arm, which was used to film the impressive Microsoft Surface Studio launch video.

The KIRA has since been on plenty of film and commercial sets. Motorized Precision’s proprietary software, MP Studio, has also allowed them to control robotic arms on the sets of films like Thor: Ragnarok. You can see some of their work in this video.

With high end clients like Marvel Studios and Microsoft, it should come as no surprise that the team behind the KIRA and MP Studio is continuously growing and innovating.

Motorized Precision has just announced the new sleeker MIA camera robot, which you can not only rent but also purchase.

The MIA robotic arm needs only a traditional single phase 110V wall socket, you can control it via the MP Studio software, and it holds a 22lb camera package. The arm itself weighs 120lbs and comes with a standard six-meter track weighing 600lbs.

In addition to the MIA, Motorized Precision also announced the KIRA 2.0, featuring a longer reach.

I wanted to know more about the MIA and KIRA 2.0, so I reached out to Motorized Precision President & CEO Sean Brown.

PremiumBeat: What are the biggest changes to KIRA 2.o?

Sean Brown: KIRA 2.0 handles the need for a lot of clients who want to reach a little further, or get behind things. The big difference is that the KIRA version one had five and a half feet of reach, and KIRA 2.o had six feet seven inches in reach.

Otherwise it’s basically the same MP Studio, same functionality, and cross platform across all three of the robots.

PB: Tell me about MIA, the newest robot in the lineup.

SB: We ran into this issue where a lot of times clients would ask [if our robots] could get through a doorway, or onto a specific location, and we had to say “No” and lost opportunities.

People were wanting to get the power of these motion control systems into very small locations. KIRA doesn’t do that too well. It’s got a 4 foot base that needs 3,000 lbs. of weight, and it just wasn’t ideal for on-location shoots. So we designed MIA.

At 126 pounds, MIA was a much better solution. It’s small and lightweight and can plug into a normal wall outlet — 110V. It’s the ultimate on-location tool, but its reach is limited.  MIA’s specialty is being on location and getting where other robots can’t.

PB: With MIA’s size, are there any limitations to the robot’s mobility?

SB: Nope. Everything is six-axis robot style, so you can use the same software for all the robots. The limits really are the reach. I would say you’re slightly faster with MIA, and each axial degree has an ability to go faster.

You can rotate axis-4 a bit more with MIA and KIRA 2.0 than with the original KIRA.

PB: How difficult is it to move the MIA between locations?

SB: It’s very easy. If you were to haul it with the 600 pound base, the base has wheels and you would just roll it around. It’s not too much more than rolling around a refrigerator. 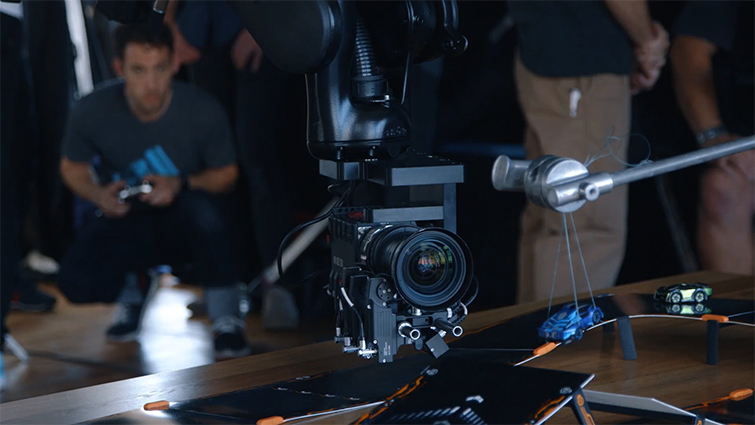 PB: Any camera systems that work better than others?

SB: For the MIA, anything weighing less than the Phantom Flex 4K — which is slightly over payload depending on the lens you have on it. The Phantom Zero, all the RED line of cameras, and the ARRI Mini would be ideal.

For the KIRA, any camera less than 40 pounds will work. We are cross platform — any type of camera can go on the KIRA system. But, we still integrate the Phantom and the RED cameras straight into the software.

PB: What do these robots require in terms of maintenance?

SB: The robots come with a 24-month warranty on the hardware. [The software, service, and support package comes with an annual fee.] With the robots’ low use, compared to industrial robots, they don’t require much maintenance.

PB: And the MIA will be available for purchase?

SB: The MIA will be sold individually, they’re all sold individually if you want. You can get MIA and track, which is the best combination. That’s similar to the robot setup we used to shoot the Thor [Ragnarok] stuff. Now the plan is to release it as an actual product.

MIA and the track gives you extra reach that MIA alone doesn’t have. It’s a really lightweight track, and the whole thing comes in under 1,000 pounds — MIA plus the track.

PB: If I were to purchase a MIA, what else would I need to get it up and running?

It would also come with the camera mounts, which weigh less than two pounds. We’ve made a really strong camera mount that is lightweight, and it’s universal for all cameras up to 22 pounds. It comes with the F.I.Z., the focus, iris, zoom control. It would come with a small computer loaded with MP Studio, a small shipping case, and a road case that has the compact controller and computer in a rolling case.

You don’t need a transformer, because it’s single phase power — 220 if you want it to be full power, or slightly reduced power at 110. 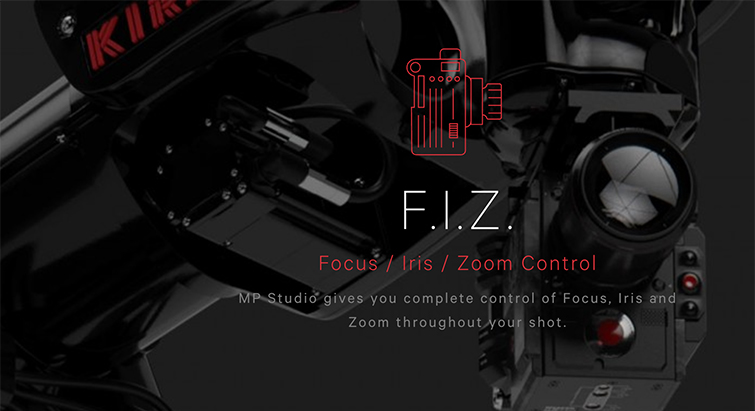 PB: When will you begin accepting orders?

SB: We are taking orders now. There is a bit of a wait time, about six months. The earlier orders come in, the more likely they are to receive their robot by Q1 of next year.

There are some KIRA version 1s that are still around that we can still sell at a slightly reduced price, if people are interested in that.

PB: Have there been any updates to the MP Studio software as well?

SB: Yes! This summer we had a master’s student in robotics come in and develop an object tracking system that uses computer vision. KIRA will now move on its own when you select a box inside of MP Studio of what you want to track.

We also added a visualizer for all the data that comes back from a move. So basically, you can separate axial speed and combined speed with the camera and track. All these different things are visualized in interactive charts within MP Studio.

PB: Any other projects you are currently working on?

SB: We just wrapped on a Dr. Pepper shoot in New York. We are working on some more Microsoft stuff coming up — which will likely use the KIRA 2.0. We fly off this week to shoot a Maker’s Mark commercial, and a few other commercials coming up in a few weeks.

PB: As far as the industry goes, we are starting to see more products coming to the indie-film and commercial market. What are the trends you’re starting to see with other big influencers like Freefly or new companies like MotoCrane?

I don’t think Freefly or MotoCrane are exactly doing that, as their systems are so different than ours. We are able to do so much more than those companies, because of what our hardware can do, and how smart it is. Those are great tools to extend what a human can do. With KIRA [and MIA], they’re such smart devices that you can control and do so many things with six-axes, and with multiple KIRAs, it’s unlimited with what you can imagine and what it can do.

The MAYA plugin that we have sort of helps with that as well, because MAYA’s interpolation is really great and you can really invision what you can do with these robots.

SB: Write me. Rentals are available, and we are here for them. The future is this technology, and being able to do more and get more out of your brain and onto the screen. We believe these robots are the tools that can help people do that the best.

Now we aren’t able to disclose an exact price, as options and software licensing costs are not included, but do expect to drop at least six-figures on your very own camera robot.

You can find the full MIA specs here, and KIRA 2.0 here.