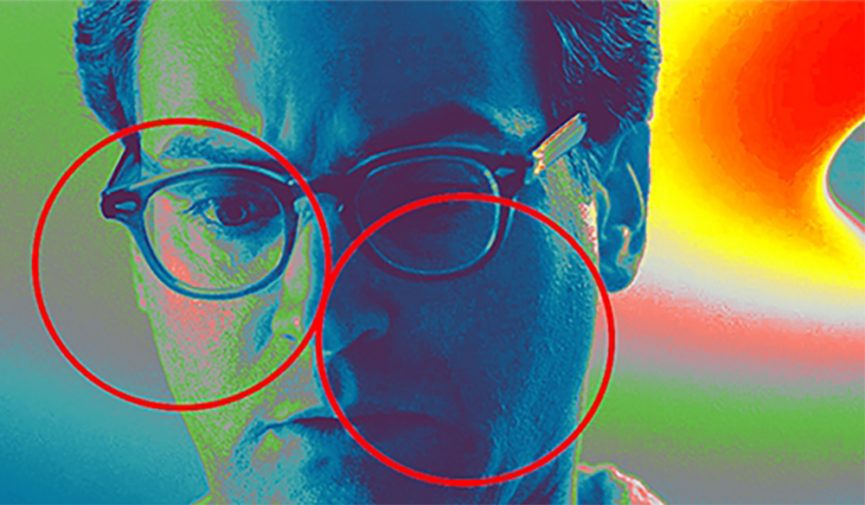 What Are Contrast Ratios and How Do You Use Them?

In this write-up, learn how you can use contrast ratios to define your visual style and build a consistent aesthetic in every scene.

In my years of experience in film production, one of the greatest hurdles I had to overcome was lack of visual consistency from shot to shot. I began to try to find the root cause in my process. Over the course of my quest, I evaluated depth of field, lighting, tracking shots — nothing was getting my footage to the level of consistency I wanted.

I began to refresh myself on the basics of color theory before diving headfirst into color grading programs like Resolve. Through these programs, I was able to give my footage a “look,” but I couldn’t shake the feeling that it had been slapped on top of the mysterious underlying condition afflicting my footage.

As I continued working as a colorist, I realized that much of the footage I was getting was suffering from similar consistency issues. I began to search for what, precisely, was making this footage hard to grade, furiously researching any new lead in forum threads long forgotten.

Finally, I stumbled across an article that rewarded my patience. I had a name for the concept I needed to learn: “contrast ratios” (or “lighting ratios”). 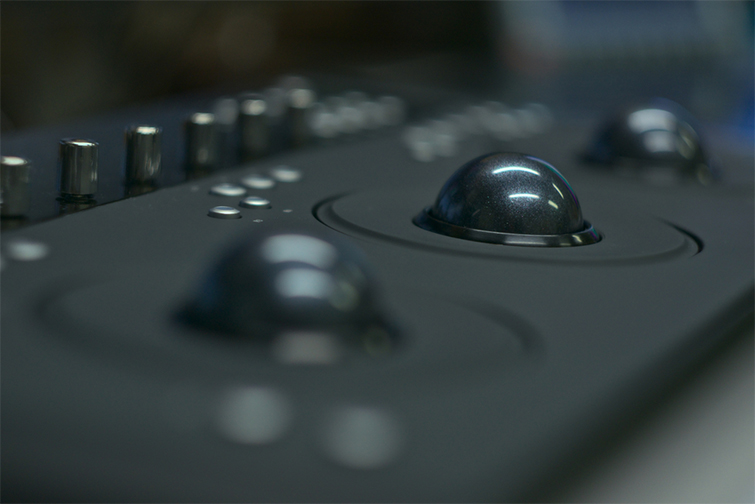 What Are Contrast Ratios?

A contrast ratio is a representation of the difference in exposure between two areas in a frame. On set, you typically measure this ratio in stops, but you can also measure all contrast ratios IRE. In theory, you can compare any two areas in the frame, but the majority of the time you will be working with either a “Key to Fill” ratio or “Key to Background.”

The second most commonly used ratio is Key to Background. This ratio helps guide the eye of the viewer to narratively important areas of the frame in an all-but-invisible way. The ratio itself represents the relationship between the key side of the subject and the illumination of the background. 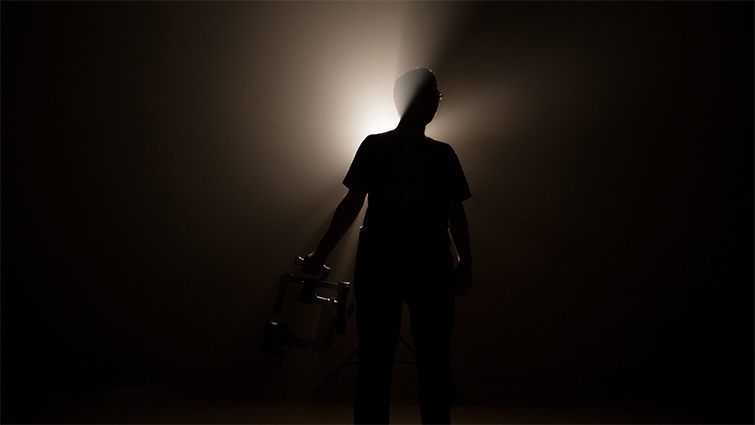 How Do You Read Them?

Once you have a basic understanding of these concepts, learning contrast ratios is easy.

Using free online resources like Stills From Beautiful Films to pull shots from some of my favorite films into Resolve (or any other program or device with false color capabilities), I was able to immediately see the ratios used by some of the most influential cinematographers of all time.

Here is a fantastic breakdown of how to use False Color by PremiumBeat author Noam Kroll.

Using False Color to measure contrast ratios is a slightly different process than using it for exposure metering.

To measure any contrast ratio in false color, follow these steps. 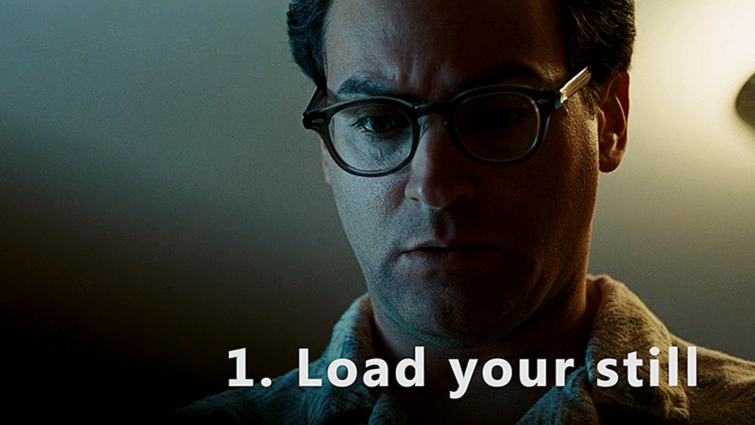 (Here’s one I grabbed from the Coen Brothers’ masterpiece A Serious Man, imaged by the living legend, Roger Deakins.)

I wanted to illustrate a completely free-of-charge process for this article so anyone can start learning these valuable skills immediately.

IWLTBAP (I don’t get it either) offers false color LUTs on a pay-what-you-can download model. Because this isn’t a plugin or built into a monitor, we’ll have some things to work around. More advanced solutions are vastly more intuitive, but the basics remain the same. The advantage of using a LUT, however, is that it will work with any program, camera, or monitor with user LUT support (which is most of them). 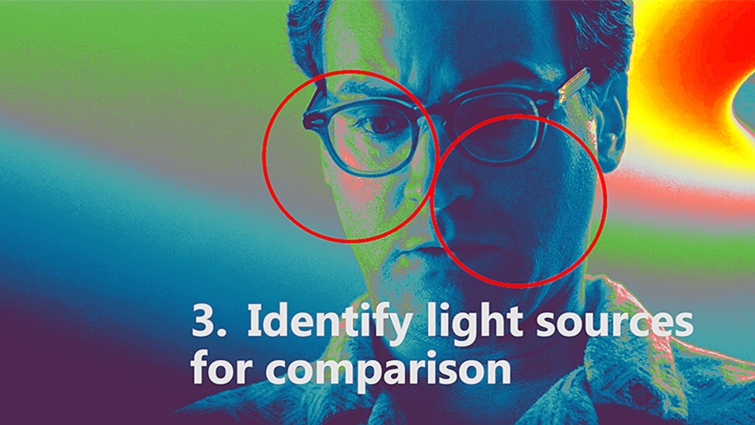 In order to determine which type of ratio you will be metering, examine all sources of light in the frame and consider how the light is interacting between the subject of the frame and the background or foreground.

In this still, we can see a key light coming from camera left while an over-exposed practical overhead provides a gentle gradient fall-off across the background — while also motivating the hair light. We can safely assume a bounce of some type is bringing up the luminance on the fill side of our subject.

With the lighting for this shot broken down, we can decide whether to find the contrast ratio for the relationship between luminance values of the key light and either the background light or the fill coming from the bounce on camera right.

This is a high-contrast lighting setup for our subject, so let’s find the Key to Fill contrast ratio. 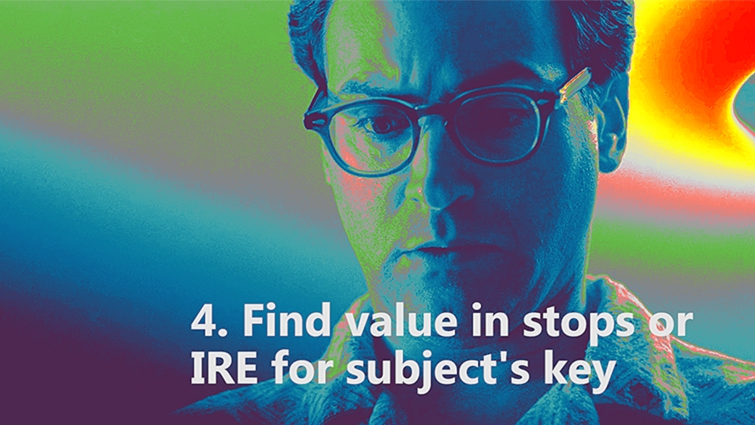 Here is the first workaround we’re going to have to deal with when using the alphabet soup of LUTs. Most proper false color plugins or features on monitors will allow users to define their own colors and light levels, much like zebras. Here, we only get the color overlay without immediate reference points. 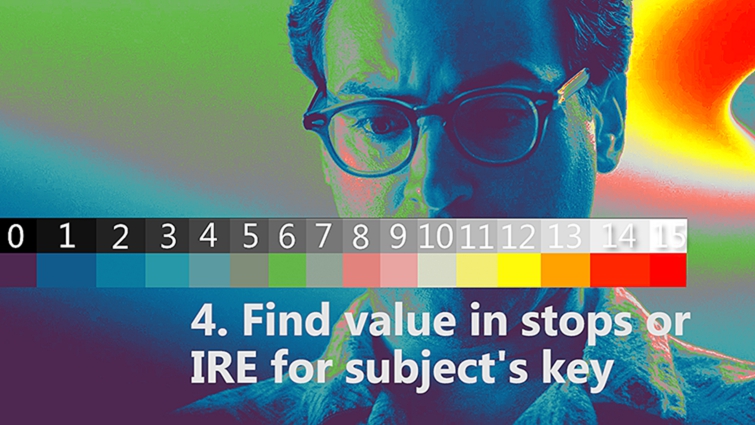 I pulled this LUT reference image, numbered the stops on the chart, and now we are in business. 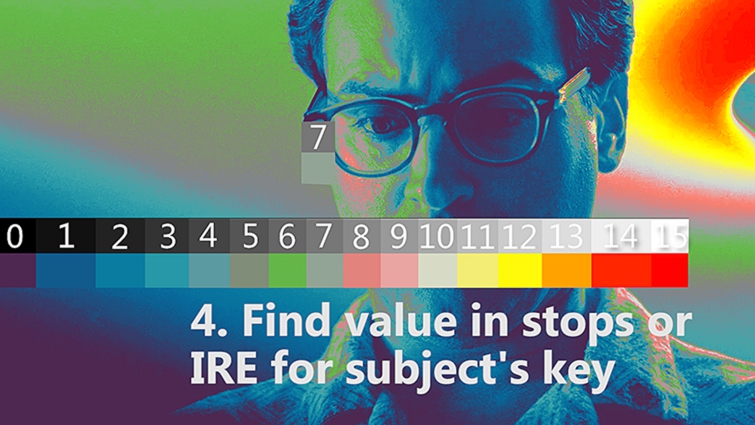 At this point, we are simply matching colors and noting their stop numbers. In general, I will shoot down the middle when getting contrast ratios to find the mean exposure for whichever area I am metering. 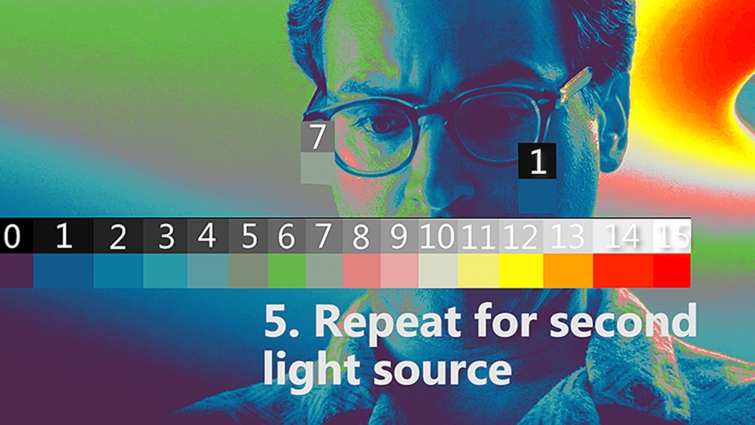 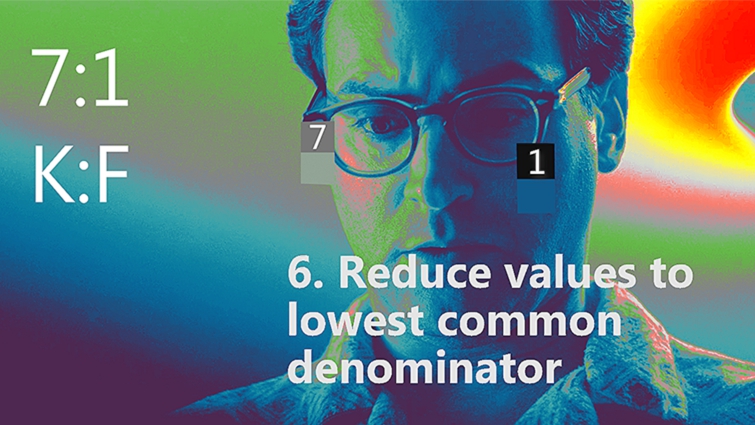 So now we can see a Key to Fill ratio of 7:1. If I am ever going to attempt to replicate a look like this, I have a clear reference point to do so.

Taking It on Set

So how do you take all this to your next shoot?

The simplest way to immediately apply your knowledge is to turn on false color in your monitor. From there, it is simply moving lights and flags until your ratio is on. You can also do this with a light meter, but for nailing your contrast ratio, I highly recommend false color.

Finally, have reference stills for each scene. Go to Stills from Beautiful Films or one of the myriad of other sites with available stills — or just grab your own. These images are hard-and-fast reference points for the contrast ratio you want to replicate.

With practice, you will develop a natural ability to spot and manipulate ratios as you shoot, and you’ll only need the tools to confirm your instincts.

Using contrast ratios will allow you to define the look of each scene before you start shooting, eliminating a lot of unnecessary work in post. Most importantly, your new sixth sense will help you define your own style and capture stunning, consistent images.