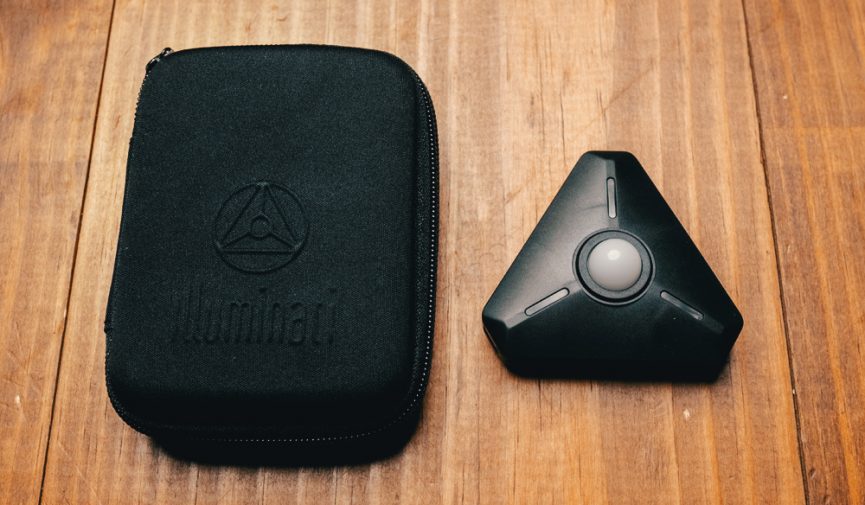 This year at NAB, I came across a booth for a company called Illuminati. They were not a secret underground organization trying to impose a new world order — as their name might suggest — but rather a nice group of folks who have created what just might be my favorite new light/color meter.

After a very successful kickstarter campaign, the Illuminati light meter has been out for a bit now, and it works great. I hadn’t heard of it myself until I found them at NAB, and let me be clear, this is not a sponsored post. I bought one for myself about 30 seconds in as they were explaining its functionality to me.

At a price point well below most of the competition (usually in the $500 range — or much higher), with both a color meter and an incident-style light meter, this was too good to pass up. 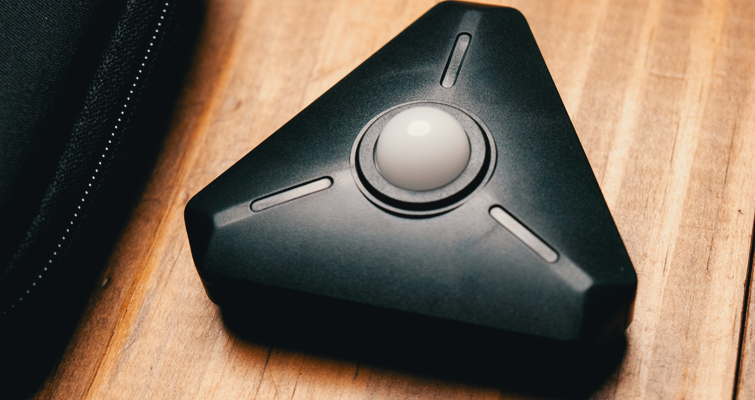 This particular meter has a very interesting form factor. I’m not sure how intentional the triangle shape was in relation to the company’s name, but the humor is not lost on me. However, the shape is actually quite functional.

The meter itself is made of plastic and features a few little LEDs that flash to signify a successful bluetooth pairing (and other various bits of information). However, you can turn this light off if you don’t want it affecting your shot. 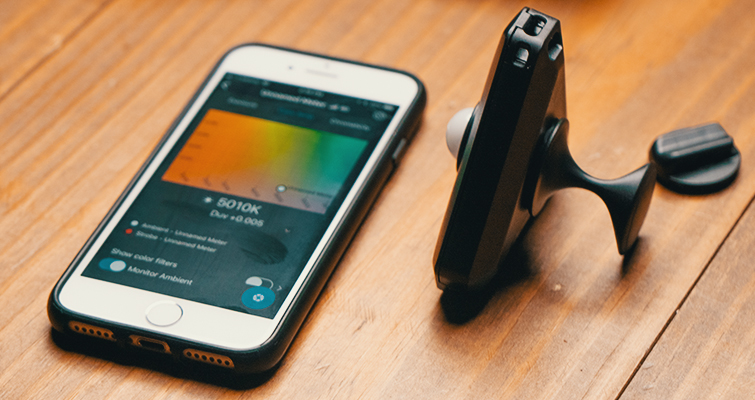 A nice little magnetic kickstand comes with the meter — as well as a magnetic back that you can use to attach the device to your shirt or a lanyard. Both are very strong and work great.

My favorite aspect of this little light meter is that you can leave it in the scene as you light. I tend to work as a one- or two-man band most of the time, and this device allows me to alter my light intensities and contrast ratios while looking at my phone and dialing in the exact look that I want. Of course, being able to do this without walking back and forth and taking readings is a great thing. 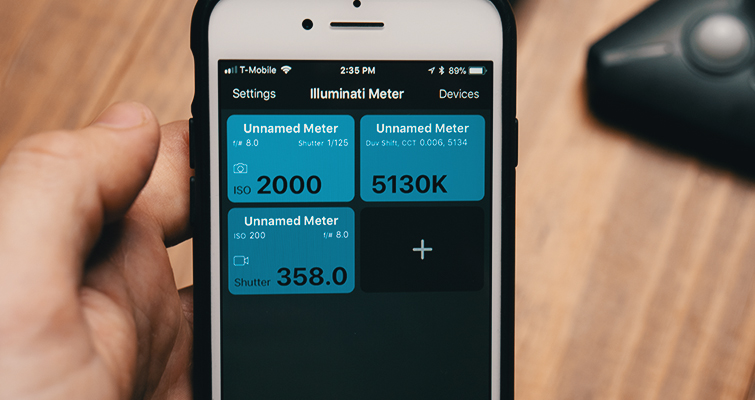 The app has a great dashboard-type screen where you can add or remove meters based on the information that you’d like to see. All at once, you can keep tabs on a video light exposure meter, stills-style light exposure meter, color temperature, and chromaticity. You can even set an alarm in this screen.

Each of these will update simultaneously based on the light hitting the meter. 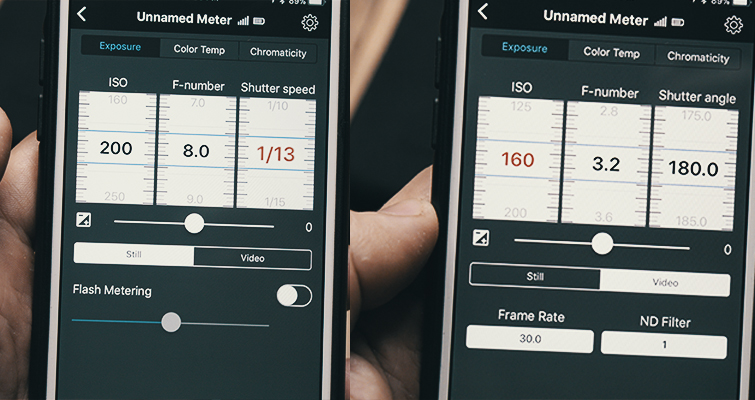 In the video meter, you can also change the frame-rate, as well as add ND filter amounts. All of this is super helpful. 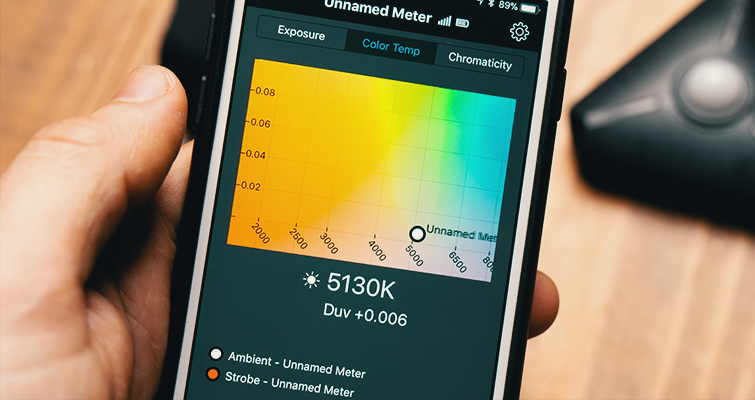 Perhaps my favorite part of the app is the remarkable color temperature meter. This addition to an already-affordable meter was the main selling point for me.

The meter gives you a graph of the current color temperature of your light. However, it also contains presets of nearly every major lighting gel company that will provide new nodes on the graph, showing you what change in color temperature would result from using that particular gel.  For instance, you’ll know how far a full CTB (color temperature blue) will push your light before you ever put it on the light itself. 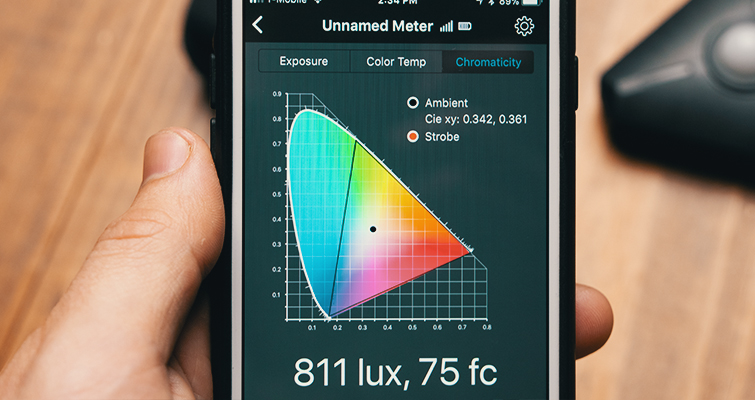 The app also includes chromaticity, which is a great tool for measuring the quality of the light hitting the meter.

Now you no longer need to rely on camera tests and manufacturer information to tell you the lux and footcandles of the lights that you’re using. You can also keep track of the magenta and green shift.

No more fretting over CRI. You’ll know exactly how to correct your lights for magenta or green shift.

If you’re in the market for a light meter, I strongly suggest this one — especially if you’re just learning how and why to use them and you want something good to start with. However, this meter is a great option for beginners and experts alike.

So far, it seems to do everything I need a light meter to do — with the added benefits bluetooth-capability and a robust color meter.