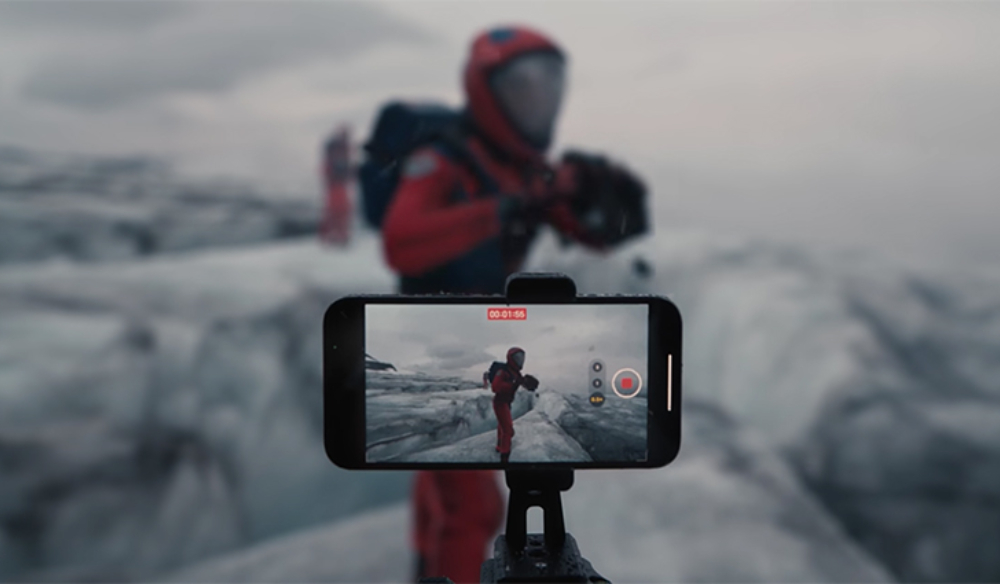 Debate aside, here are three examples of smartphone videography that might make sense for you filmmakers out there.

You can debate it as much as you want, but regardless of whether you’re “for” or “against” smartphones being used for film and video production—it’s gonna happen nonetheless.

Also, it’s obviously worth pointing out that smartphones have made tremendous strides in terms of camera technology and video recording capability over the years.

Smartphone videography isn’t anything new either. Filmmakers have used smartphones to shoot Hollywood features as far back as the iPhone 5S. Simply look to Sean Baker’s Tangerine, or Steven Soderbergh‘s Unsane and High Flying Bird.

But, the question remains whether using a smartphone—like the new iPhone 13—is right for you and your production desires, styles, and needs.

So, while this answer will obviously be up to you, here are three examples of how and when using a smartphone for your video projects might just make sense.

OK, as we dive into the rest of this list, I think these other options will all be pretty understandable and agreeable to most. However, it’s really this first proposition that’s the most controversial.

Should you actually use a smartphone (whether that be this new iPhone 13 or a top-of-the-line Android) to shoot a real, bona-fide indie short or feature film?

As stated above, it’s been done. So, you can’t say it’s impossible. Yet, if it were easy (and obviously cheap), wouldn’t you see a lot more of it?

The debate for using smartphones for indie films really comes down to these two factors: video recording quality and lenses. These are really the only elements that separate a smartphone camera from your run-of-the-mill DSLR or mirrorless digital camera.

And, while neither will match the video recording quality of your higher-end cinema cameras like ALEXAs and REDs, the new iPhone 13 in particular is getting pretty darn close to matching some of your favorite digital cameras from the past few years.

At its best, the new iPhone 13 (Pro Max) can record video in its new cinematic mode at 1080p at up to 30fps (with Dolby Vision HDR up to 4K at 60fps). You can also utilize the built-in lens options including ultra-wide, wide, and telephoto.

Here are some of the full specs for the iPhone 13 for reference:

However, if you were to seriously consider using a smartphone for your indie film project, you’d probably want to at least consider some third-party attachable lens options (like these from Moment for the iPhone 13, specifically).

Is it going to be better than shooting on a Canon C100 with Zeiss Prime Lenses? Probably not. However, will it be close to what you might have seen with a Canon 5D and some decent Canon zoom lenses circa five to ten years ago?

The other most obvious use of a smartphone for professional video production is simply for the shooting of content for social media.

The two biggest examples in the current social landscape would include recording video for TikTok and Instagram. And, while you could (of course) record this footage on any array of digital camera options, there’s indeed something to be said about recording “organically” with a smartphone camera.

There are actually a few reasons you might want to consider this. The first reason has to do with file sizes and ease-of-use. Even if you’re looking to record video on your smartphone and transfer it over to a computer to edit, you’re still looking at smaller file sizes (than most higher-end digital cameras) and a quicker workflow overall. This is doubly true if you shoot in-camera and plan to edit and work with the video in-camera, as well.

However, there’s also something to be said about recording video for social media directly on smartphones as the best way to create authentic-looking content. No matter how hard you might try to synthetically recreate that smartphone camera look, nothing beats (or will be easier to make) videos that look like they were shot on a smartphone than by . . . you know . . . actually shooting videos on your smartphone.

Plus, with these latest iPhones and the like, these videos will look quite outstanding while still being authentic to the medium.

Finally, while there are obviously tons of other times you might want to use a smartphone camera for other projects—like vacation vlogs or perhaps run-and-gun documentary work—this is probably one of the most practical ones.

In the world of advertising and commercial video production, spec videos are a huge part of the process, especially when you get into the bigger-budget projects that require detailed storyboards and lengthy, intricate pitch processes.

Traditionally, filmmakers and commercial videographers have to create spec videos to help them win clients and projects where they showcase a rough (yet sometimes quite close to the final) version of a commercial or video.

For specs specifically, the trick is to find the right balance between creating something as close and comparable to your creative vision, while still not exhausting your resources on a production that might end up being all for naught.

With a smartphone like the iPhone 13, you might finally get the best of both worlds in a camera that’s easy-to-use and accessible, yet can showcase at least a glimpse of that higher production quality with its cinematic recording.

Combine it with lenses and some simple rigs to mirror different shot types, and you could actually do a pretty bang-up job of shooting a commercial spec or sizzle reel. It might not look too far off of the final version.

However, as with all these examples, it’s ultimately up to you as you decide on your specific production styles and needs. Still, for those who might have ruled out smartphones as anything but a gimmick or non-option in the past, it’s time to reconsider.

For more smartphone filmmaking advice, tools, and resources, check out these articles: