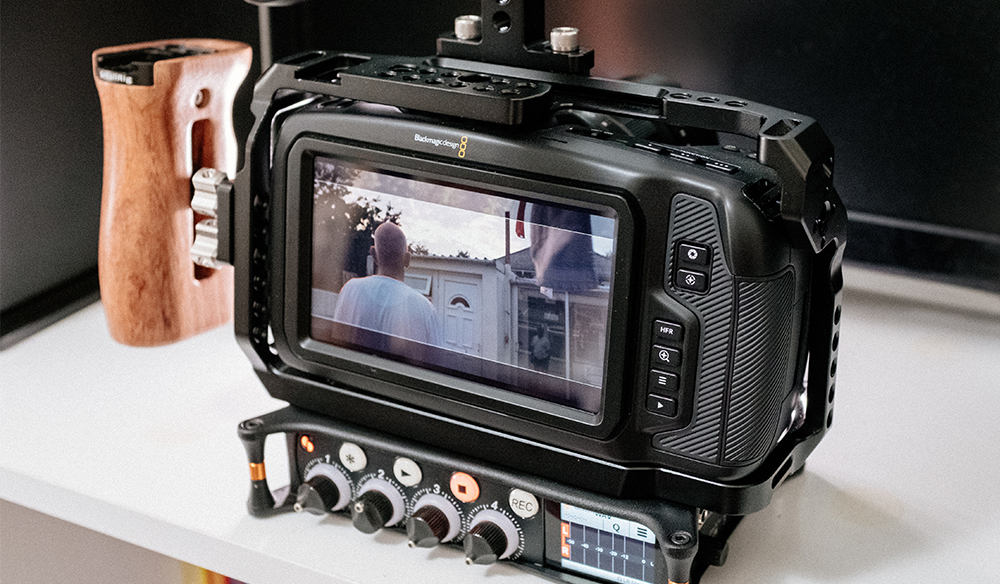 The Pocket 4K already feels excellent on a handheld shoot, but how can you make it into a more accommodating, versatile weapon?

When the 5D MK II and 7D started making headlines nearly a decade ago, not only did they make “cinematic” imagery available to the everyday filmmaker, it also meant you could make films in more locations because you weren’t restricted to a large camera. Indie and no-budget filmmakers making guerrilla projects couldn’t conspicuously film without calling attention to themselves. A small, compact camera, however, makes you virtually invisible to the car park attendant, who would otherwise tell you to get lost. And, of course, let’s not forget how these small cameras brought cinematic imagery to the run-and-gun style documentary that initially had a very “video-like” look. Although shooting with the 5D MK II handheld still produced an amateurish, home-movie feel, when camera cages and small run-and-gun rigs entered the market, the camera became a versatile filmmaking weapon.

Conversely, it’s also gratifying to see how filmmakers can take such a small device and turn it into a Goliath rig, mirroring a professional cinema camera setup. Ethan Saint shared this image into the Pocket 4K Facebook group, and well, you would undoubtedly need large trousers to put this camera in your pocket. 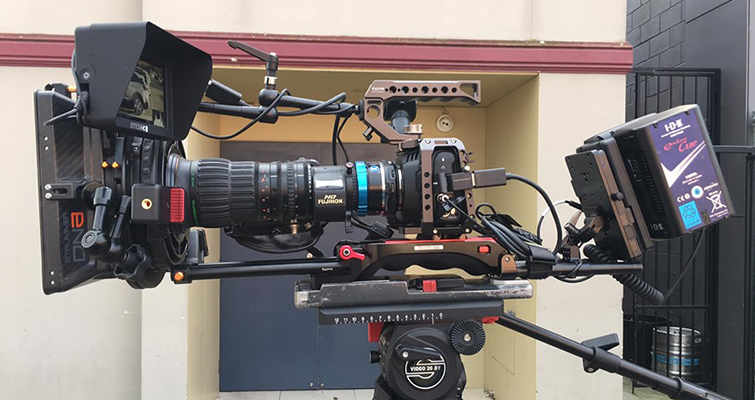 While it’s certainly a fun challenge to kit your camera up to something operated by two people, some of us look to keep the Pocket 4K as pocket as possible. That said, it is absolutely not necessary to house and rig the camera, especially if you have no additional means to finance it. My primary test, which has since been watched nearly 250,000 times, was shot with nothing but a tripod and handheld, straight out of the box.

But if possible, I do recommend that you shop for at least three rigging accessories to make the camera more practical when shooting handheld because there’s no IBIS.

The Pocket 4K houses the typical 1/4″ thread for attaching the camera to a tripod or shoulder rig, but unlike DSLRs, it also houses another 1/4″ thread on the top of the camera for additional accessories, such as a microphone or a small light, like Aputure Amaran MX. However, this top thread wouldn’t be suitable for something like a top handle or a heavy-duty monitor (Pocket 4K Manual pg. 28):

Do not support the weight of the camera via the top 1/4″ mount by using accessories like a screw-in camera handle in conjunction with a heavy lens. This will damage the 1/4” mount, which will not be covered under warranty. Do not subject the mount to excessive lever force, such as mounting a heavy accessory on an extension arm.

Therefore, we’re going to need to use a cage to attach additional accessories to the camera, especially the top handle, which is an essential accessory for a run-and-gun setup. But, which cage?

Well, recommending a cage from the cages currently on the market is kind of like suggesting a beer from three quality brewing companies — they’re all excellent with only slight variations.

If you had to choose between the Tilta full cage $99: 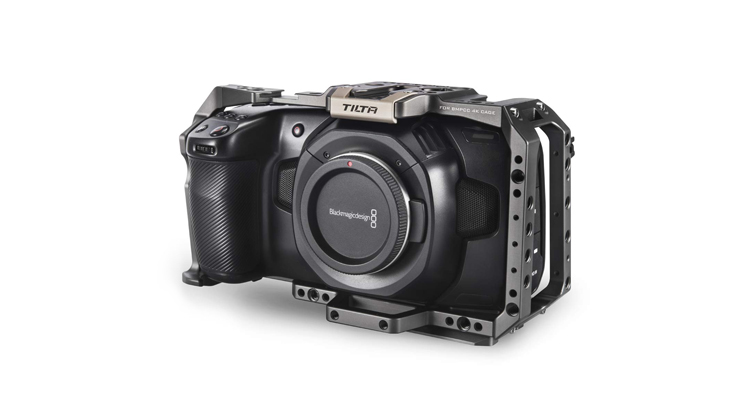 The SmallRig full cage at $79: 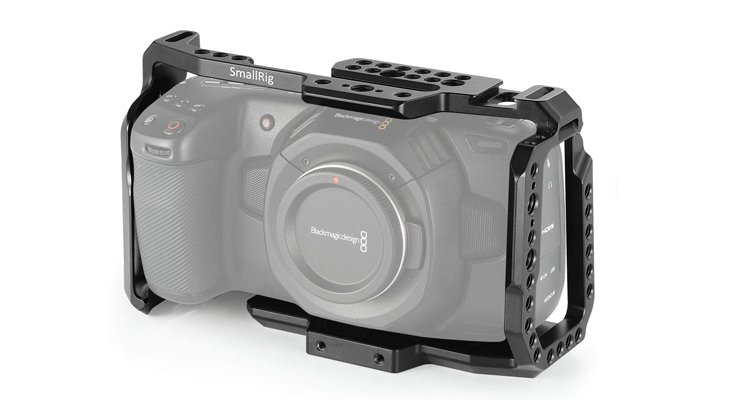 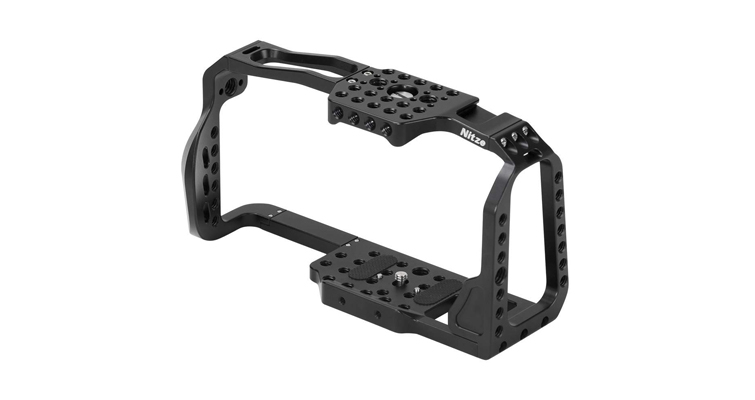 Is there a fundamental difference between the three cages? Well, outside of a few variances in mount placements — not really. Although, that gun-metal tactical finish of the Tilta cage does look cool. The cages provide a robust protective housing for the camera, with a variety of mounting points of 1/4″-20 and 3/8″-16 threads. None of the cages listed above will block entry to the card or camera slot — likewise for the side inputs.

I would happily argue that, ultimately, it comes down to brand loyalty — and perhaps if you have a preconceived notion where you would like to position your microphone or monitor mount. If you’re shooting low and want to mount the monitor so it faces straight up, you could run with the Nitze cage, as it offers a mounting solution on the top front-facing section of the cage. Alternatively, the Tilta cage provides mounting points on the lower front-facing section. The weight hardly differs between the three cages — Tilta 342.9g, SmallRig 300g, Nitze 327g — and as I already mentioned, the price between the three will only fluctuate a few dollars, depending on the retailer. I went with SmallRig solely because Amazon, at the time, was offering ten percent off.

Below, I also recommend two handles, but some brands offer a full cage with a handful of mounting accessories that will work out cheaper than if you buy the rigging items separately. Be sure to double-check the prices on these listings before committing to a purchase.

While it’s common to see run-and-gun filmmakers incorporate two side handles onto their DSLR/mirrorless camera cages, for the Pocket 4K, I don’t think it’s necessary. Here’s why.

Initially, it felt like there was something inherently alien about the design of the Pocket 4K. While it holds and feels like a DSLR, for some reason, it looks awkward. Likely, this is due to the rear of the camera slightly facing inward, and because the back of the camera is primarily the LCD screen with just a narrow strip of buttons. However, what we do have on the Pocket 4K is a grip that is slightly wider than a typical DSLR, and as such, offers better handling. Therefore, I argue that with just one side handle, a filmmaker would have a form-fitting grip with the camera, even with a cage attached. 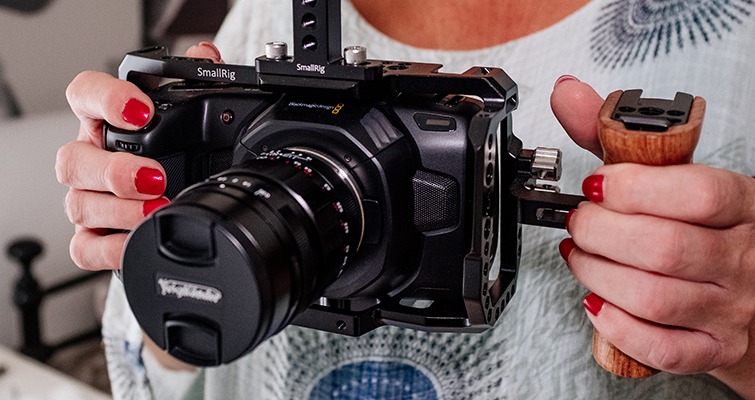 Another reason, which is the primary reason to use the one handle, is the practicality of having your fingers close to the record button. In a run-and-gun situation, it’s not likely that you’re going to be mounting the camera on a tripod, where you can change the settings independent of holding the camera. Without a side handle, you can adjust the primary settings at the front, hit record, and even tap the function buttons with your thumb. With a side handle on the right side, however, you have to release your hold so you can adjust the settings, or even to hit record. 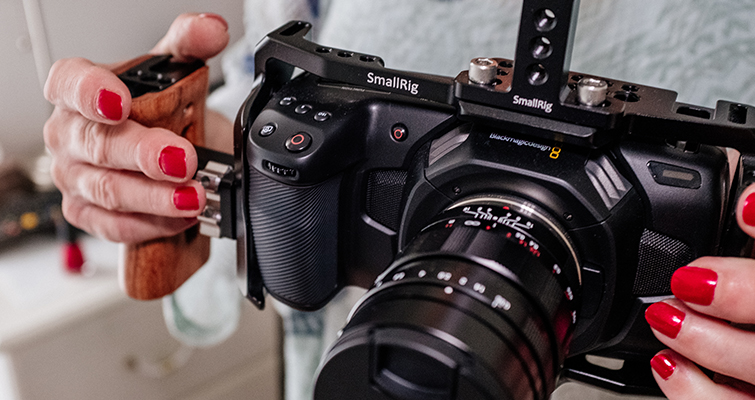 As to what handle you should purchase, again, this is entirely dependent on your brand loyalty and the practicality of the handle. For example, you could lead with the SmallRig Wooden Handle with threaded holes, which allows you to adjust the position of the handle without having to detach it from the cage. Alternatively, you could go with the SmallRig Wooden Handle that uses a Rosette Grip. While it doesn’t offer the same flexibility as the other handle, it makes the impression of the camera smaller.

Well, let’s get the obvious out the way — a top handle for most cameras is an invaluable tool. There aren’t many other safe and secure methods of picking up a heavy camera with an array of peripherals attached. However, for compact cameras like the Pocket 4K, it may seem excessive, as the camera is extremely lightweight, and you can already pick it up just as quickly with the side handle — or by grabbing the camera itself. And of course, if you’re trying to save money, the $50-$100 that a top handle can cost could go toward a different accessory.

However, despite the light weight and small size, I still contend that a top handle is just as essential as it is for an URSA. As the Pocket 4K is significantly wider than most “pocket” cameras, it’s likely that when initially picking up the camera, you’re still going to be using two hands to do so. Especially if equipped with a side handle, due to the weight ratio. 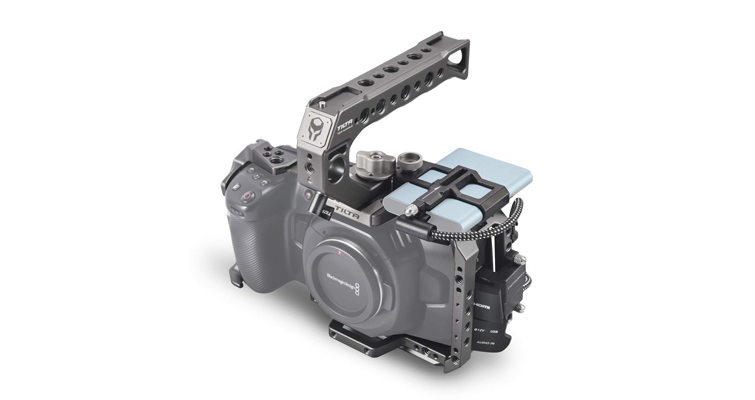 While it makes handling the camera more comfortable, there’s also another reason — that pesky LCD screen. If we look at the GH5, specifically the rear, we can see a significant difference in the amount of space allocated to the LCD screen. Likewise, the GH5 (and many other cameras) have an articulating screen that you can rotate in for protection. 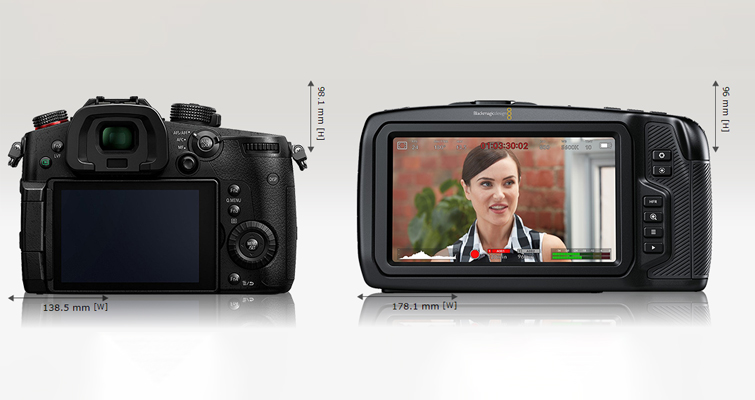 The Pocket 4K doesn’t have that. And as I pointed out in my review, during my test shots, I spent a fair amount of time wiping my fingerprints from the screen. If we’re in a run-and-gun situation, you don’t want to stop and take out the microfiber cloth to wipe down the screen. And without a top handle, you’re going to have to grab the camera by the body, which is going to lead to you touching the LCD.

A cage, a side handle, and a top handle. If you’re on a budget, that’s all you’re going to need to make this camera more accommodating for handheld shooting — as well as attaching more accessories. When the 5D MK II burst onto the scene, the cages and accessories that followed could end up costing near enough to the initial selling price of the 5D. That’s not the case in 2019. While the usual suspects are still selling Pocket 4K cages for $400-$500, you can easily build a handheld setup for $200 or less.

Looking for more articles on film and video gear? Check these out.