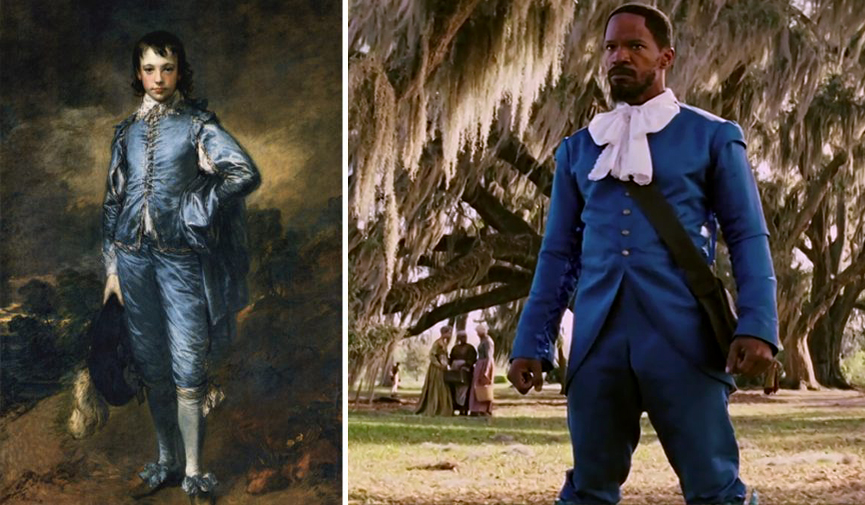 The Influence of Paintings on Filmmakers

See the art of painting and the art of filmmaking meet in beautifully composed shots.

Top image: The Blue Boy via Wikipedia and Django Unchained via Columbia Pictures

Artists have always influenced other artists, and many artists steal from each other. Whether it’s the influence of legendary painters on filmmakers, or a single painting helping a writer tell their story, there are countless examples of filmmakers finding inspiration in other works.

Here are a few examples of paintings being recreated in films (and paintings showing up in films) to get your creative juices flowing.

To see the influence paintings have had on filmmakers, start with this great video essay series Film Meets Art by Vugar Efendi.

In this first video, you will see how paintings come to life in film — as artwork like the Birth of Venus by Sandro Botticelli was recreated in the film The Adventures of Baron Munchausen by Terry Gilliam. Other inspirations include Thomas Gainsborough’s The Blue Boy in the Quentin Tarantino western Django Unchained, and Edward Hopper’s House by the Railroad being built as Mother’s home in Alfred Hitchcock‘s Psycho.

The second installment has even more stunning recreations — including the actual recreation of Jean-Auguste-Dominique Ingres’ La petite baigneuse, dit aussi Intérieur de harem in Jean-Luc Godard’s Passion. You will also see the classic Freedom from Fear by Norman Rockwell in Steven Spielberg’s Empire of the Sun, and Jacques-Louis David’s La Mort de Marat in Alexander Payne‘s About Schmidt.

From characters visiting museums, famous works of art hanging in a protagonist’s home, to subtle storytelling cues — paintings have appeared in many different ways.

The James Bond epic Skyfall used the famous British painting The Fighting Temeraire by J.M.W. Turner as a talking point, as Q asked Bond about his interpretation of the piece.

Q: It always makes me feel a little melancholy. Grand old war ship, being ignominiously hauled away to scrap… The inevitability of time, don’t you think? What do you see?
James Bond: A bloody big ship.

This particular question was a meta reference to the aging James Bond franchise, and whether or not a fun-loving spy from the 60s had any place in this current generation. 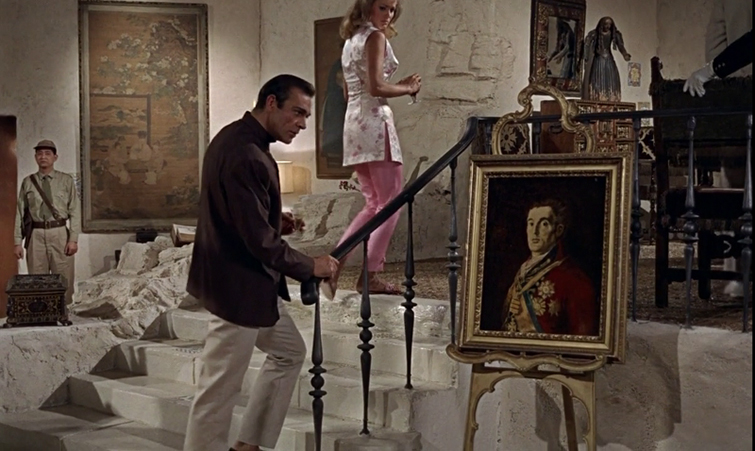 Image: Dr. No via United Artists

Skyfall certainly wasn’t the first James Bond film to use paintings to influence the story, as the very first Bond film, Dr. No, featured Francisco Goya’s Portrait of The Duke of Wellington. That painting was famously stolen from the National Gallery in London on August 2nd 1961. A replica of the painting was used in the 1962 film, hanging in Dr. No’s lair — suggesting he was the one who stole it. 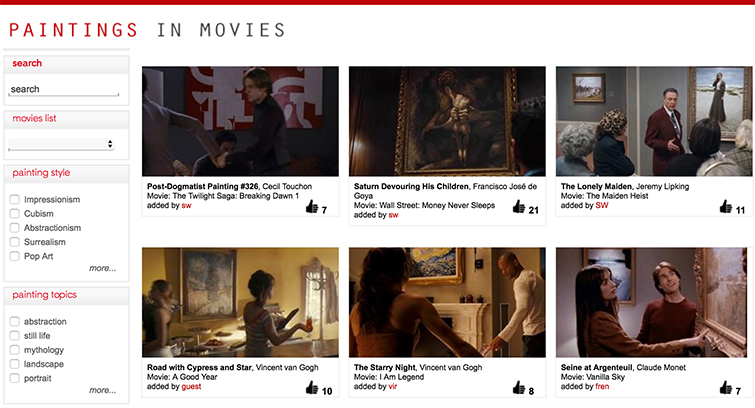 Those two examples alone show how drastically paintings can be used in completely different manners. For more examples, I highly recommend diving through the archive of Paintings in Movies. The website is full of film stills with paintings — which you can sort through by styles of art (like impressionism or surrealism), as well as sorting by colors, artists, and topics like landscapes or portraits.

Paintings and art theory certainly have plenty to offer filmmakers. For more inspiration, be sure to take a look at the basics of color theory, applying a film’s color palette to your own projects, and even turning your films into moving paintings.

What are some of your favorite works of art showing up in film? Let us know in the comments below.