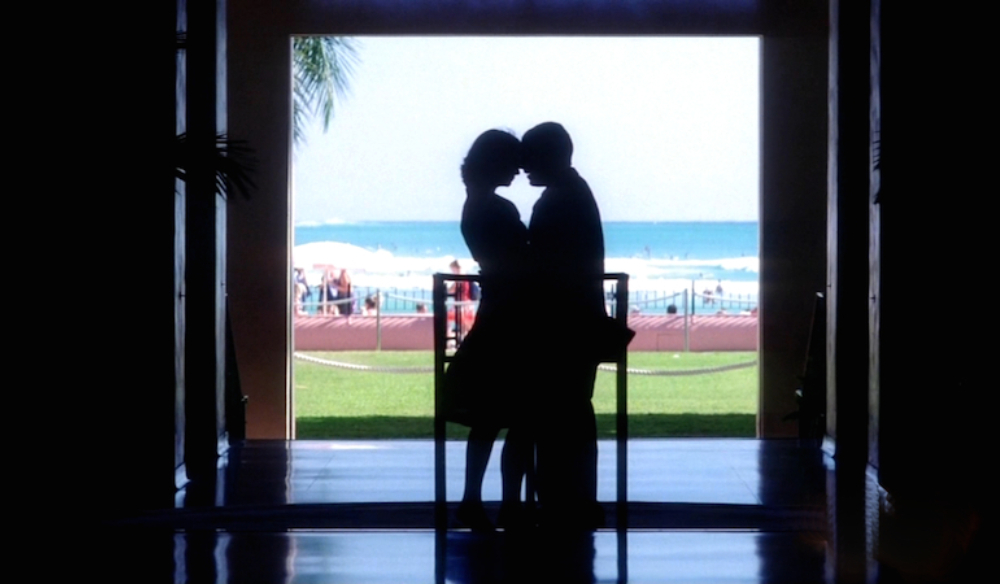 Let’s look at P.T. Anderson’s masterful “frame within a frame” compositions and explore ways you can incorporate the technique in your next project.

When I think of my favorite shots from the films of Paul Thomas Anderson, there’s one that frequently takes the top spot—the beautiful embrace (see above) shared between Adam Sandler’s Barry and Emily Watson’s Lena in Punch-Drunk Love. It feels compositionally perfect.

The bright background, full of rich colors, stands in stark contrast to the dark silhouette formed by the symmetrically framed characters in the foreground. All of it is just so exquisitely staged, lit, and composed, and it’s a fantastic example of an iconic P.T. Anderson “frame within a frame.”

If you’re not yet familiar with this cinematography term, don’t worry. We’re going to explore what “frame within a frame” means, examine how filmmakers like PTA pull the shot off, and then check out some tips and tricks for using the technique in your own film and video projects. Let’s dive in.

What Does “Frames Within a Frame” Mean?

Simply enough, a frame within a frame is exactly what it sounds like. It’s a frame created within a film shot or composition. The technique is a staple of visual storytelling, and, once you know what you’re looking for, you’ll find it everywhere—cinema, television, video games, you name it.

Frames within frames are not mere happenstance. They are a conscious filmmaking decision, and their purpose is to place characters, subjects, and objects within a new, different cinematic frame so that the audience thinks about them in new, different ways.

You no doubt already “get it”—it’s a frame. Within a frame. Nonetheless, it’ll be easier to really nail the technique if you understand how important the Z-axis is to shot composition. This Z-axis is how we define the foreground, middleground, and background elements of a shot—here’s everything you need to know.

As you’ll see in the video essay above (expertly crafted by Philip Brubaker for Fandor), the films of Paul Thomas Anderson are a legit master class in all manner of creative, meaningful framing techniques.

Brubaker’s video showcases Anderson’s gift for natural framing, highlighting the director’s ability to shape audience emotions by juxtaposing characters inside and outside of environmental, everyday frames like doors, windows, and hallways. Additionally, Brubaker shows us how some of Anderson’s most striking frames are the result of the director’s willingness to experiment with and combine different video formats—vintage black and white TV, home movies, 16mm film reels, etc.

Other Examples of Frames Within Frames

Obviously, P.T. Anderson isn’t the only filmmaker tapping into the compositional power of frames within frames. The above essay from Nerdwriter1 provides insight into how Hong Kong director Wong Kar-wai uses these tight framing devices in his films—like In the Mood for Love—as a way to confine characters and their feelings.

Other notable adherents include Stanley Kubrick, whose love of symmetrical frame-within-frame compositions is legendary, and Wes Anderson, who occasionally uses kitsch props and handmade effects to frame his characters in contraptions of their own making.

At this point, you’d be hard-pressed to watch any modern film or television show and not see examples of frame-within-a-frame cinematography. The question simply remains: How do you plan to use this technique?

Tips for Creating Your Own Frames Within Frames

When it comes to actually creating your own frames within frames in your film and video projects, it really comes down to set scouting and design. Remember, while you might accidentally create the occasional frame within a frame, more often than not, they are the intentional result of planning—drawn into a storyboard, listed on a shot list, scouted and designed for production, etc.

This technique is also meant to be used as part of the story you’re trying to tell. Throwing a door frame into a shot doesn’t add anything unless you’re trying to develop something thematically. For every scene, you should be asking yourself questions about how your characters are feeling, what their motivations might be, and where they are in their own story arcs.

If it makes sense to juxtapose them inside of frames—like windows or doorways—ask yourself what this might convey to the audience. Do you want them to feel far away? Do you want to create a sense that the characters are trapped? Or, do you want them to perfectly fit within a box of their choosing?

The best examples of frames within frames will feel both natural and important. Notable filmmakers and cinematographers alike will tell you that the best shots are filled with nuance, intentionality, and expression. It’s up to you to decide what story you want your frames to tell.

For more on framing, cinematography, and filmmaking, check out these articles: