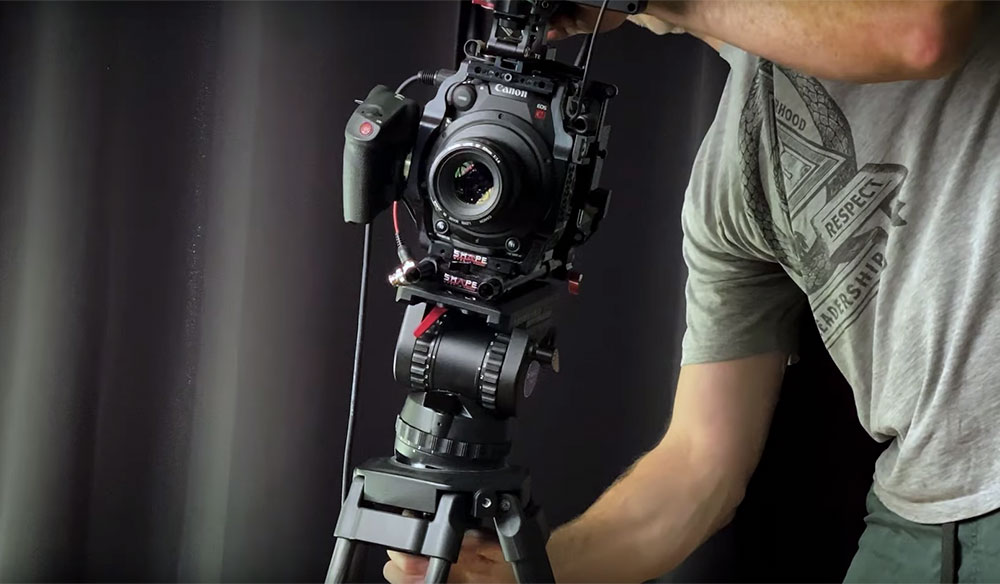 A Practical Guide to Dutch Angles and Tilted Framing

Dutch angles, if used discreetly, add an aura of dread, as well as a sense that the world has gone askew. Let’s take a look at how to pull this move off.

Dutch angles are awesome. But anyone who’s ever actually tried to get these shots, convincingly, knows they’re deceptively tricky. You don’t need a big, expensive rig to pull this off, so let’s take a look at how to make them work.

The most common way is to debubble the camera. This involves unscrewing the ball head and tipping it over to the side. This allows you to continue to operate panning and tilting, as you normally would. The downside is that most ball heads only tilt a couple of degrees, usually not far enough to get extreme angles, or to accurately increase the amount of dutch in your shots.

Another way (though many would advise against this) is to shorten one leg of the tripod so that it tips over to the side. This not only emits a sense of danger, it’s actually dangerous, especially for heavier cinema cameras. You need to keep a hand on the camera the whole time to keep it from crashing to the ground. On the positive side, you can slowly shorten the leg so the angle gets increasingly more extreme. The good news is, most tripods have a rubber grip base to keep tracking, or you can employ stakes which some tripods have, just determine the surface below the tripod when figuring out how to keep it steady. If you’re curious about other essential tripod maneuvers, check out our tutorial on all the must-know moves before you arrive on set. 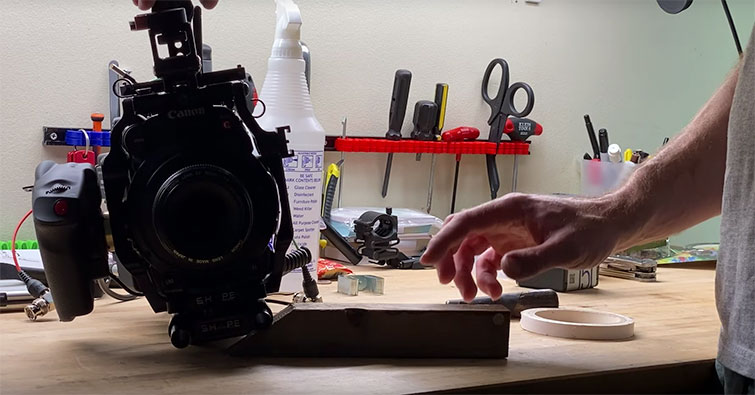 A wooden wedge is a good way to get a steady Dutch angle. Just be sure to secure the camera.

A simple and cheap way to get a great Dutch angle is to place the camera on a flat service and put a wedge-like block, or sand bag, under one side of the camera plate. The camera is already on the ground or hard surface, so if it tips over, it doesn’t have far to fall. This is a quick, easy method; however, it doesn’t let you operate the camera while the shot is in motion because you need to remove it from the tripod head. I’ve tested out shots this way many times, avoiding taking a lot of time to set up the shot, you can just play around and try methods out like this once you arrive on set, or are just playing around at home with your camera.

If you’re working handheld, or from a shoulder mount, you can easily achieve a dutch angle by holding the camera more on the side. In fact, the challenge when working like this is to maintain a level horizon, and not to dutch the camera. However, if you’re looking to keep a camera down on the ground or use it at your level, you can use a hi-hat. Paying for one is unnecessary so if you’re interested in building your own on the cheap, check out the tutorial below (I’ve time-stamped it). 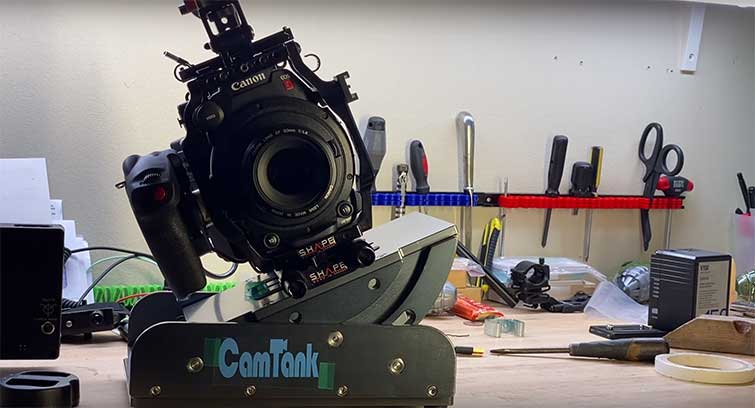 The Cam Tank is safe and professional way to pull off a Dutch angle.

The last, most professional way to get a consistent, controllable Dutch angle is to use a specialized piece of camera equipment called a Dutch head — such as the Cam Tank from Matthews. You can use them right on the ground or install them between the tripod head and the camera. It has specific marks that let you dutch the head precisely, in case you want to slowly increase the amount of tilt from shot to shot, or to match the amount you previously used. You can even dutch in the middle of a pan — though more is often less.

For instance, if you shoot wide or medium first, you could add four degrees of tilt. Then, when you push into the close-up, you can push that up to six for the over-the-shoulders, and eight or ten for singles. Using the Cam Tank, when you turn around to shoot the other side of the conversation, you can match this tilt exactly. But, Dutch heads aren’t cheap. The Cam Tank is $1,700, but you can rent one for much less. If you’re looking to rent a cam tank, head on over to ShareGrid and check out what they have in stock here.

Regardless of which technique you use, remember to keep a light touch and know that Dutch angles have more of a psychological impact when they’re felt, rather than seen.

Want more on filmmaking techniques? Check these out.