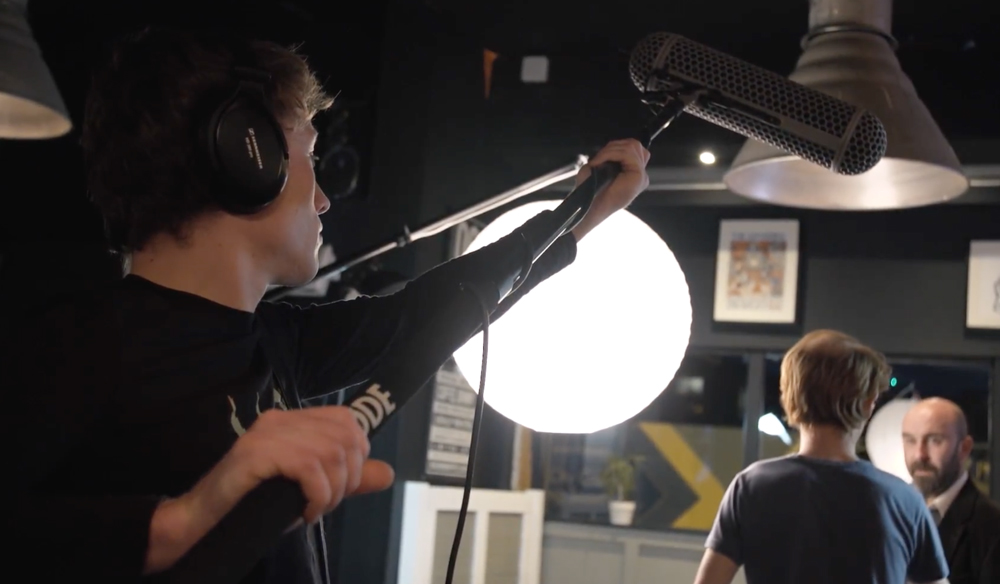 Learn how to properly record audio on set with a traditional boom mic setup.

All images via The Film Look.

Here in the PremiumBeat office, we’re big fans of The Film Look — a YouTube channel dedicated to showing you how to make better films and videos (with new episodes every week).

We recently teamed up with The Film Look to bring you a series of tutorials on capturing better sound for your videos. The eight-part series will cover a ton of different audio recording and mixing topics, with plenty of tips and tricks for you to learn along the way.

In the first five episodes, you will learn how to work with audio on set. Then the series will shift focus to working with audio in post-production.

You’ll quickly see that it’s not about having the right gear — it’s about knowing how to properly use audio equipment. The audio kit used in the series is the basic setup for indie films and corporate video productions — a shotgun mic, boom pole, audio recorder, and headphones. There are also tips on recording with smartphones and on-camera microphones for those without this setup. (You can piece together a professional boom mic kit for around $500.)

The position of your microphone is crucial to a quality recording. In the first episode, you’ll hear the difference between a smartphone recorder and a shotgun mic — but there’s a twist.

If you are on a windy set, try positioning the microphone underneath the subject, or for the best results combine that with a dead cat or blimp.

When it comes time to record, limit the movement of your hands. Use your arms and shoulders to reposition the microphone to avoid making noise. There are also some great tips in the video about the best ways to grip a boom mic.

Capturing Dialogue Is Your First Priority

The highest priority when recording a film or video is dialogue. Noises or sound effects are easier to  recreate in post — or to draw from an SFX library.

While on the topic of noises, if you detect any outside noise on set — like a plane, train, or automobile — be sure to bring it up if recording has not yet started. If you are already rolling, finish the take, and then mention any need for another take.

Before shooting, make sure the camera crew (specifically the 2nd AC if you have one) uses a clapper board to mark the take. This will help tremendously when editing and mixing the project in post.

You can silence the set as much as possible to eliminate unnecessary ambient noise, but that doesn’t always prevent unwanted sounds. Episode three dives into separating dialogue from any noise the actors make on set.

If there is a loud action, like placing a glass mug on a glass saucer, you can eliminate the noise with some simple camera tricks and foley work.

The loudness of actors and actions differs in every take. Make sure audio levels don’t peak, and leave some room for any unexpected loud noises or increases in conversational volume.

In this episode, you’ll hear the audio clip when one character shouts. Be sure to lower the gain while recording dialogue. Also, be sure to capture about two minutes of room tone to help avoid unnatural silence. This ambient noise makes conversations sound more realistic, and it can cover up hard edits. (If you forgot to capture room tone, check out our pack of 15 free ambient noise tracks).

Wild takes are sound effects recorded on set without dialogue. If cameras aren’t rolling (and if you can convince the crew to be quiet) you should try to record some on set SFX. They can be as simple as an actor’s footsteps or the clashing of dishes, doors, or machinery.

The goal is to capture the sounds that could be difficult to find in a SFX library. While we may have hundreds of thousands of SFX here on PremiumBeat, you may not find the exact sound to the exact time you need. For example, if you are shooting a scene with an old car, it’s best to record real engine sounds to keep the sound as authentic as possible.

Something to keep in mind: you don’t need to turn up the gain to capture all these SFX. Since they will become layers in post, you’ll want to keep them accurate to the levels you’d hear on set. So if footsteps are quiet and slightly registering on your recorder, that’s ok. Try to record each SFX in a few different ways, including different microphone angles, positions, and distances.

Pro Tip: Announce each action as soon as you hit record and before you start performing. That way you can easily keep track of each different sound effect.

Make sure you check out the rest of the Indie Film Sound Guide episodes. There you will learn about working with everything you’ve recorded in post. Also, be sure to subscribe to The Film Look’s YouTube channel for weekly tips and tricks on filmmaking, video production, and post-production.

Do you know other indie filmmaking tips for capturing audio? Let us know in the comments.