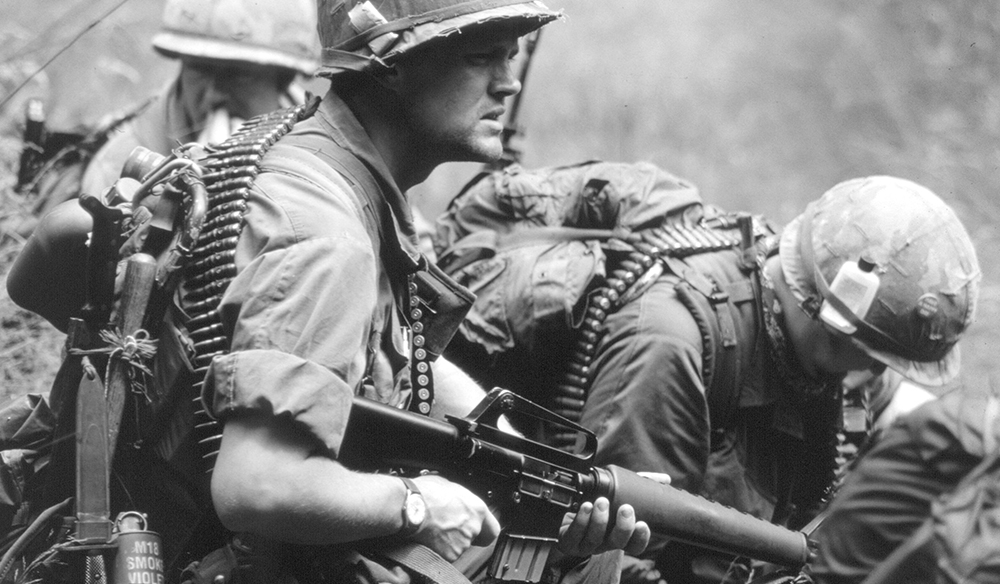 Gear up and roll out with these best practices for creating visceral war action and realistic battle scenes in your film and video projects.

If you really think about it, every battle scene ultimately comes down to one thing: one side wants something that the other side doesn’t want to give up — the high ground. A beach. A prisoner, information, or maybe a way home.

Whatever the spoils at stake, the best war, action, and thriller movies have the power to elevate filmmaking as a whole, as they force directors to innovate with technique and technology in order to make something more accurate and jaw-dropping than what’s come before.

And while it would be nice to have a giant Saving Private Ryan budget and thousands of extras, that’s not realistic for many indie filmmakers. Fortunately, creating visceral battles in smaller film projects only requires some of the most basic tenets of filmmaking — world-creating, empathetic storytelling, safely performed stunts, and lots of simulated explosions.

So, before you roll into your next battle scene half-cocked, take a look at a few tips and resources handpicked to help you on your mission.

When it comes to classic battle scenes, you can’t do much better than the harrowing, large-scale sequences found in the Francis Ford Coppola horrors-of-war epic Apocalypse Now. And, while it’s a bit dated (released in 1979), its world building is by far the standard for great battles and impressive set pieces.

Coppola’s unique world-building approach is on full display — as is the legendary behind-the-scenes drama forever associated with Apocalypse Now — in the documentary Heart of Darkness (1991). I highly recommend giving the doc a watch, as it’s one of the best resources for learning about the (occasionally brutal) totality of filmmaking.

Heart of Darkness offers great insight into everything from camera angles and cutting techniques (which Apocalypse Now is quite famous for) to advice on how not to cause your cast and crew to lose their minds.

Here’s another stylistic tip for creating realistic battle scenes: Shoot long sequences that keep your viewers on the edge of their seats, trying not to blink.

The long take sequence is a hallmark of many notable action, adventure, and war movies like Saving Private Ryan and The Raid: Redemption. The technique is also used as a stark contrast to contemporary styles in television and streaming programs like True Detective and Game of Thrones.

One of the best examples, though, would have to be the non-stop, long take narrative of the World War I epic 1917, directed by Sam Mendes and shot by the legendary Roger Deakins, who you can learn a great deal from in the video above.

Compositing action sequences in post is a great way to create highly technical stunts in a safe and controlled manner. This approach is perfect for anyone with limited production resources who needs battle, fight, and action sequences on a budget.

The video above — featured in our article “ESCAPE ROOM (Short Film) — How To Composite Your Own Stunts” — outlines several compositing techniques you can use to create highly sophisticated stunt sequences that look incredibly lifelike and delightfully dangerous.

War and battle scenes have only grown more over the top over the years, thanks to big visual directors (like Michael Bay and Kathryn Bigelow) who fill their movies with lots and lots of explosions.

Obviously, I highly recommend that you approach working with fire and explosives with the utmost caution. Even better? Hire a dedicated, professional explosives expert. You know a couple of those, right? If not, one alternative for DIY filmmakers is working with explosive elements in the edit.

If you need things to go boom without blowing up the coffeeshop that’s letting you shoot your scene after hours, download our Detonate freebie pack to get 40 totally-free explosion VFX and sound effect elements. Additionally, you can find all kinds of high-quality explosion assets over at RocketStock.

The Importance of Your Soundtrack

Finally, as you can see above in the famous bank-heist scene from The Dark Knight, one of the most vital elements of a solid battle-action sequence is a pulse-pounding soundtrack.

Here are some curated, goose-bump-inducing soundtrack selections to use in your next battle, war, or action project.

Before you shoot your next battle, action, or war scene, check out the articles below. They’re loaded with tips, tricks, techniques, and inspiration.