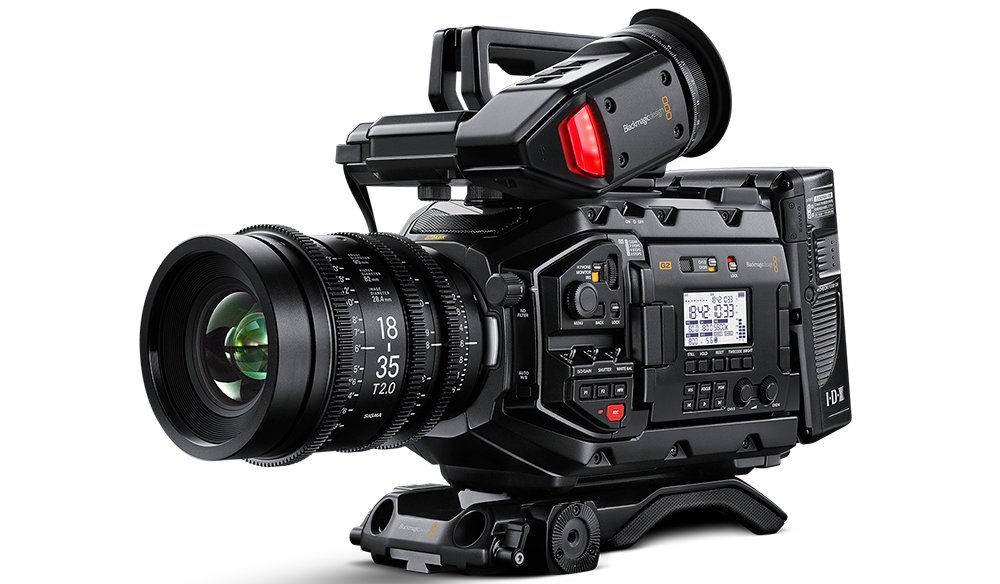 Blackmagic URSA Mini Pro 4.6K G2 is a versatile camera, good for nearly any workflow. Let’s take a close look at the camera in a documentary environment.

Last week, I took the G2 into Paris to see how it holds up as a solo documentary rig. I used it to shoot a one-minute doc, focusing on street art in the City of Lights. Here are five takeaways from the shoot.

No time to watch the video? Here’s a transcript that covers everything in the clip. 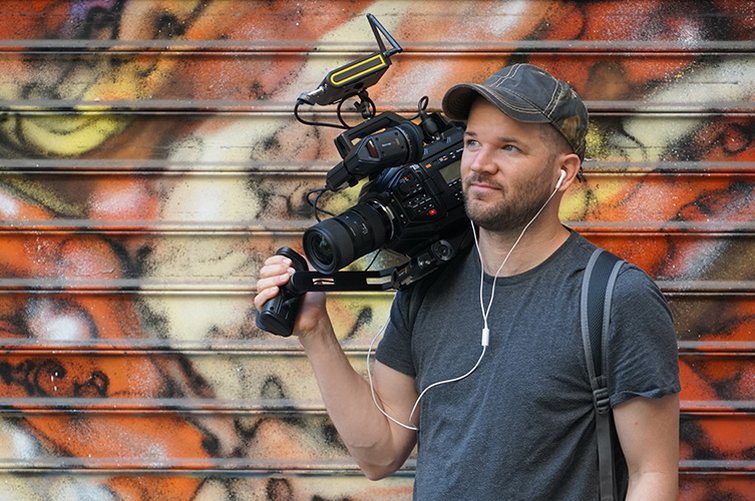 With the Blackmagic shoulder mount and viewfinder, transitioning between a tripod and handheld is simple.

First, let’s talk about the rig I was using. The impressive thing about this camera is that Blackmagic has a plethora of brand-name accessories available. Since I shot everything handheld, I used the shoulder mount kit and viewfinder, both from Blackmagic. The shoulder kit consists of a top handle, shoulder pad, and an extension arm for the side handle. The shoulder pad has a tripod quick release, two rosette mounts, and rail options. This makes jumping between a tripod and handheld shooting incredibly simple.

To power the URSA, I used Blackmagic’s V-Mount adapter plate to use the V-Mount style batteries. For audio, I had a Deity Connect wireless lavalier on my subject, with the receiver attached to the top handle of the shoulder mount kit. There’s also room to slap on a shotgun mic, but I opted not to for this shoot. The G2 also has mounts for any type of lens you’d like to attach. This model has an EF mount, making it easy to use budget-friendly photography lenses. All of these accessories make the URSA a perfect rig for solo run-and-gun work. 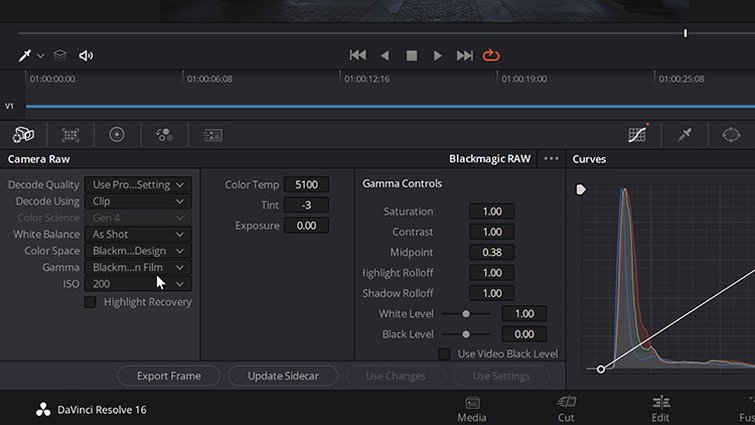 Shooting with a Blackmagic camera streamlines your workflow.

The beauty of shooting with a Blackmagic camera is the RAW workflow. The codec, the camera, and the editing platform are all under the Blackmagic umbrella, providing a streamlined workflow. Also, when you purchase the URSA, you get a free copy of DaVinci Resolve Studio. Even if you don’t prefer using Resolve, Blackmagic RAW is supported by many other popular editing applications.

Shooting in RAW preserves all of the camera data while on set. This can open up creative options in post, or just help save over and underexposed shots. With Blackmagic RAW, there are a number of compression ratios available to help fit any budget or workflow.

I shot this short with a 12:1 compression ratio. Using Angelbird’s Match Pack, I have 2x 256GB CFast cards and 2x 128GB SD cards, allowing me to capture just under six hours of footage. Not bad! 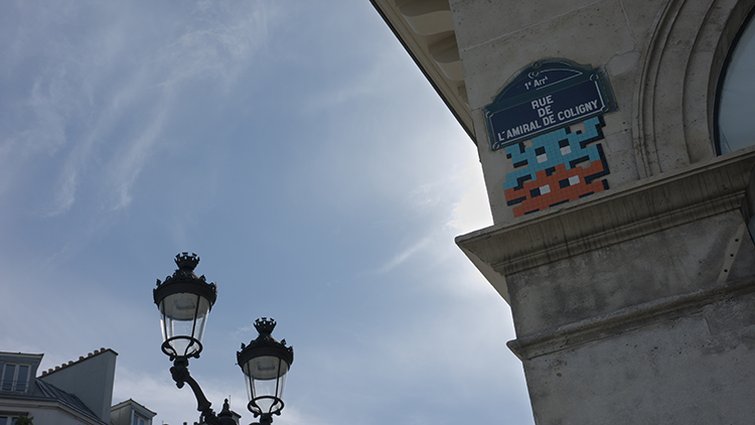 The G2 shoots superb angles, preserving all of the shadows, highlights, and colors of the subject.

The G2 has fifteen stops of dynamic range, allowing me to preserve all of the highlights and shadows. This was especially important for this shoot, as I was shooting up and outside during a bright summer day. You’ll notice that in many of these shots, my subject was standing in the shade, against very bright backgrounds. These included bright buildings and the sky. However, with this much dynamic range, I can capture all of these exposure values and tweak them during post-production.

You can’t talk about Blackmagic without mentioning the color. The company is known for their color science, and Resolve is the industry standard for professional color work. As with the RAW workflow, capturing an image with a Blackmagic camera and finishing in Resolve is a fantastic workflow. Did I mention that the URSA comes with a free copy of DaVinci Resolve Studio? 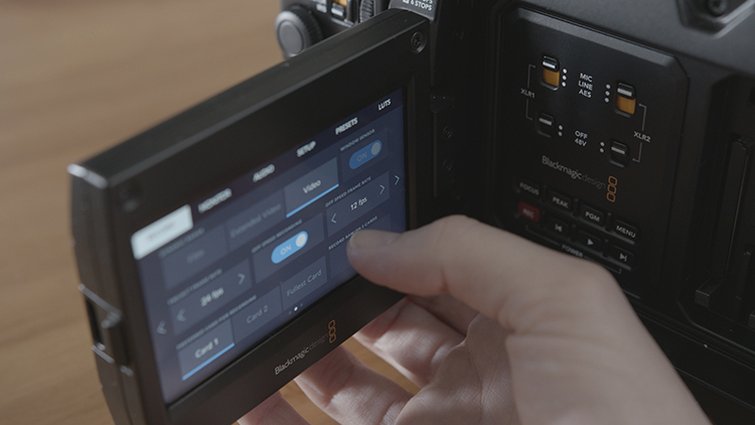 This beast of a camera has both undercranking and overcranking options. When shooting at 4.6K, you can bring the frame rate all the way up to 120fps. If you knock your recording resolution down to 1920×1080, you can get up to 300fps. Once you have the high frame rate set, you can quickly toggle it on and off via the HFR button.

I found myself using this feature pretty frequently while running around Paris. With just a simple adjustment in exposure, I was ready to rock ‘n roll and capture that slow motion. If you’re looking for some fast motion, the camera also has an interval recorder. 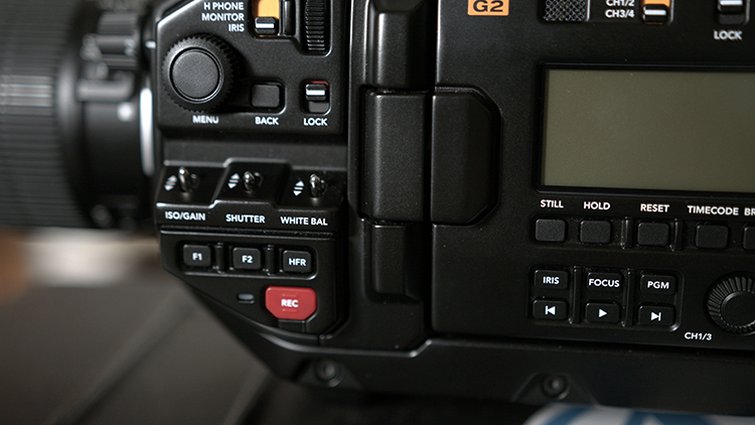 Blackmagic’s UI is both efficient and intuitive.

A good documentary camera needs good ergonomics. This is one area where the URSA really delivers. I come from a broadcast television background, where the cameras are loaded with external buttons and knobs, and you hardly ever find yourself diving into menus. I was happy to see that this is also the case with the G2. Even if a user needs to jump into the menus, it’s impossible to get lost. The Blackmagic menu UI is one of the best around, and the large touch screen makes for an intuitive experience.

The primary feature is the internal ND filters. If you’ve done run-and-gun work outside, in bright environments, without internal ND filters, then you know exactly what I’m talking about. And, once again, I also found myself using the HFR button quite often.

So, there you have it, five reasons why the G2 is a perfect tool for the wonderful world of documentary. If you’d like another example of the URSA in action on a doc, check out Towers of Tigray.