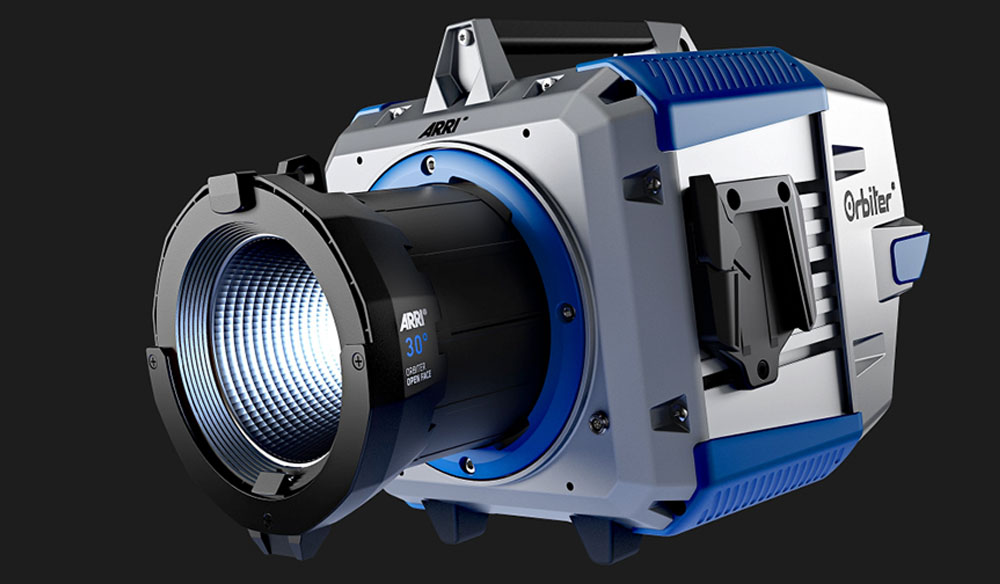 Introducing The Light That Can Do Everything: The ARRI Orbiter

Every once in a while, a piece of gear comes out that threatens to change everything. In this case, it’s ARRI’s new Orbiter.

Nothing excites me more than seeing significant advancements in the lighting field. Cameras are constantly getting updates, but in the grand scheme of things, most cameras already look cinematic, offer good slow motion, and shoot in 4K or higher.

To me, the lighting field is where truly cinematic images begin — and where the advancements are most apparent. Just look at the way the Quasar changed the lighting landscape, creating an entire style of music video lighting altogether.

This week, ARRI announced the Orbiter. It’s appropriately named, because it looks like something straight out of the latest Sci-Fi movie. The Orbiter, to say the least, looks sick.

In some regards, this light represents the first lighting unit that I would firmly say can do anything. It can be a leko light, it can be a softbox, it can be a fresnel, it can hook up to other lights via ethernet — and you can control it wirelessly via DMX on your iPad. It can automatically gauge the light in the room and change seamlessly to varying degrees of brightness and color temperature. It can do many things.

One thing that I initially thought about this release was how it almost seems like ARRI’s version of many the things that Aputure announced at NAB this last year. Also, the addition of the quick change optics system reminds me quite a lot of the 120 and 300d lighting units (though, this light doesn’t feature a bowens mount like the others, requiring proprietary ARRI modifiers). The Orbiter is obviously a higher-end model, which means a higher price-tag, but these features seem to mirror much of what Aputure is now and will soon be offering.

The Orbiter definitely has quite a few impressive tricks up its sleeve. Here are the ones I’m most excited about.

ARRI has developed a new Quick Lighting Mount system for the Orbiter. Unlike some other products on the market, this system does not involve a bowens mount; rather, it includes their new QLM (quick-lighting mount). This means that if you want to use various modifiers, you’ll need to purchase them from ARRI.

So far, this system seems to involve an open face option, a projection lens option (similar to a source four leko), a dome option, and an adapter to allow for soft banks (similar to a chimera system).

ARRI units have always impressed with the quality of the light they create. This unit represents a leap ahead of the competition in this regard. ARRI Spectra is a six-color light engine. According to the product page

This results in an unprecedentedly high CRI of about 98. This engine also includes a color sensor mode, which will read the ambient color surrounding the fixture and match the color with complete accuracy. It can also accurately render colors from 2,000 to 20,000 kelvin.

This is the future of lighting — LED lights with high output and nearly flawless color rendition.

While there are certainly more technical specs that are impressive about this light, this one for some reason really catches my attention.

This light is fully waterproof. The fact that a light with this much technical capability, output, and everything else can also operate it in any scenario, including rain, is just incredible. This light just seems like the answer to any lighting situation.

I think this light represents a shift (that I think other companies had already started) in the lighting industry. LED lighting has now shifted from being a competitor to more traditional lighting styles (HMI or Tungsten) and is now creating a class of lighting all its own. In 5 years or less, HMI or tungsten units may be a thing of the past on the majority of movie sets.