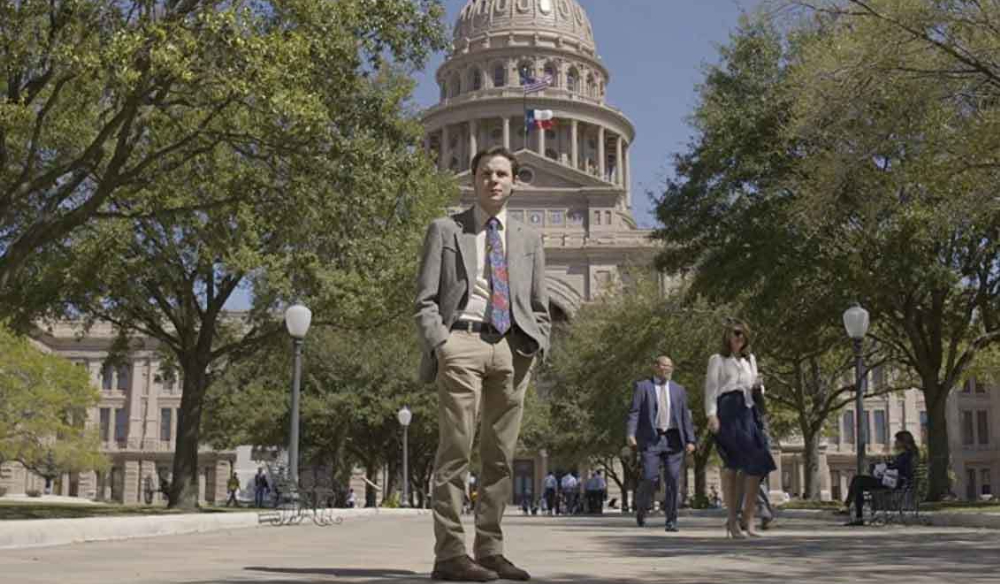 Kid Candidate: How a Viral Video Campaign Launched a Documentary

An interview with the viral filmmaker and the serious documentarian behind one of this year’s most important documentary films.

While living in the small Texas panhandle city of Amarillo, then twenty-four-year-old musician Hayden Pedigo had an idea for a video. Inspired by Harmony Korine films like Trash Humpers and Gummo, Pedigo and his friend shot a short faux-VHS video where Pedigo announced his campaign for city council. For all intents and purposes, it was a joke to share with friends online. But, like most things on the internet, it quickly found a life of its own.

When the video made the front page of Reddit, garnering thousands upon thousands of views, Pedigo was faced with a decision. Would he laugh it all off and keep making silly videos with friends, or would he actually explore the possibilities of running for office and trying to improve his hometown?

This is the story of Kid Candidate, a documentary by Jasmine Stodel, which follows Pedigo on the campaign trail. Throughout the process, Pedigo continues to make viral videos, as well as serious attempts to connect with residents and put together a genuine platform.

Because of its viral origins and real-world implications, Kid Candidate is a study in both viral video responsibility and self-aware documentary filmmaking. We caught up with Pedigo and Stodel at the Oak Cliff Film Festival in Dallas, Texas, to chat about their film and how they see these two distinct styles of content evolving in the future.

Hayden Pedigo is a musician at heart; his music actually makes up much of the Kid Candidate soundtrack. We asked him about the original inspiration for his viral campaign videos and what he’s learned about both mediums now that the documentary about him has been released.

PremiumBeat: When working on the original campaign videos, how did you choose and achieve their unique visual aesthetic? Did you shoot with an old camcorder, or did you apply VHS effects in post?

Hayden Pedigo: I was inspired by Harmony Korine’s trashy VHS aesthetic (Trash Humpers/Gummo), and I just used a free app on my old iPhone 6 to shoot and edit the entire video.

PB: Can you tell us about how this documentary for your campaign came to be? Did you have any ideas into how you might want your story to be presented?

HP: When I was first putting out the videos, I was trying to decide if I could actually do a serious campaign for city council and was mulling it over. Through some strange circumstances, I found out about Gunpowder & Sky and sent an email to their senior vice president about the idea to make a documentary following me while I actually ran for city council after making a joke video.

PB: Since you now have insight into both viral video and modern documentary, do you see more similarities or differences between these two styles?

HP: I think they are very different. I mean, making my first city council video took three hours to shoot and edit everything, and this documentary took over two years to finally be released. So, it was a totally different experience. I think the documentary, in this case, worked to tell a nuanced story about something that, even though it started as a joke, turned into an actual political movement in a small conservative town.

The original campaign video clearly looks heavily-inspired by Korine and other DIY filmmakers. However, it does have a nice rhythm and visual aesthetic with its overblown audio and retro text effects.

If you’re a fan of the old-school look, there’s no need to spend time picking through pawn shops in search of a camcorder. You can reproduce Pedigo’s approach with any number of simple smartphone apps, or you can use the tutorials below to create an array of custom VHS overlays and vintage text effects.

Jasmine Stodel is the seasoned documentary filmmaker who covered Pedigo’s audacious campaign and shaped the narrative of Kid Candidate.

As we’ve noted before about documentary filmmaking, creating a narrative out of real-world characters and events can be a challenging endeavor. However, Stodel was able to use her diverse documentary experience, and, at times, her own voice, to bring the story to life.

PremiumBeat: Can you tell us a little bit about your documentary and filmmaking background? Also, what initially attracted you to this project and Hayden’s story?

Jasmine Stodel: I have worked in scripted, digital, reality, and documentary. When I lived in NYC, I worked for Vice on a documentary called Heavy Metal in Baghdad, and it hit me that documentary was the most amazing tool to change people’s lives and minds.

I love making documentaries about extraordinary people who are changing things for the better, or at least attempting to do that. I could tell that there was something special about Hayden from the moment I saw his video. I also had the opportunity to show someone young making the effort to make the world a better place. A perfect subject.

PB: Can you tell us a bit about how you shot this documentary? How big was your crew? What cameras and gear did you choose to use?

JS: I went to Amarillo with a very talented DOP, Homero Salinas, Jr. We wanted to shoot our part so that it stood in contrast to Hayden’s campaign videos. Homero is so awesome and inventive. He worked with minimal lighting equipment, and we actually ended up making many homemade rigs, inspired by the Instagram account @shittyrigs.

We had Hayden’s best friend Alex as the second camera and his friend Scott as sound. In fact, everyone on the crew, including a few who ended up in the movie, was a friend of Hayden. The film was shot mostly on a Sony FS7, and audio was minimal. Very small crew. Very intimate.

PB: At a couple of points in the documentary, we see texts from you (the director) talking directly to Hayden about the documentary. How did you arrive at the decision to occasionally bring yourself into the story?

JS: It was impossible to capture Hayden all the time, and also at his most vulnerable. So, we had to be inventive about how to really show his struggles. The text messages from our conversation were the only documentation of this moment, so we decided to use it.

PB: If you could give any advice to aspiring documentary filmmakers looking to tell modern and important stories like this one, what would it be?

JS: It took me many years of working in the industry to realize that I could be a director and producer. Follow your gut, pick the subjects you’re passionate about, things that break your heart and are inspiring to you . . . and do the work and persevere. Things will align.

Due to Stodel’s confident guidance, clarity of vision, and considerable experience, Kid Candidate capably supports and showcases both its subject and its message. It’s a rare, balanced film that displays an understanding of the cool detachment of internet culture while embracing the heartwarming sincerity of someone working IRL to improve their community.

For more documentary interviews, tips, and tricks, check out these articles: