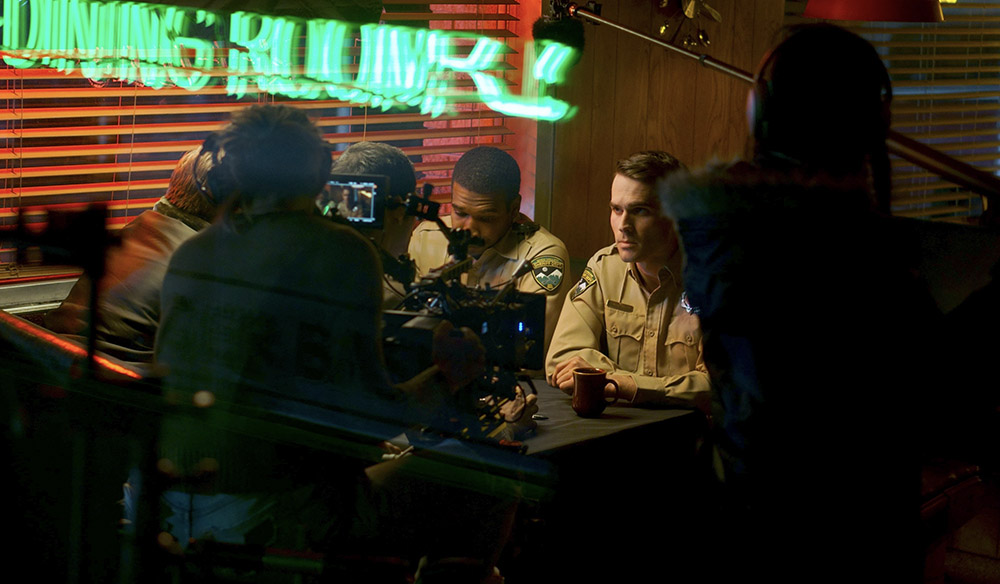 Following that win, Cummings turned the short into a full-length feature of the same name, premiered it at SXSW 2018 (where it won the Grand Jury Prize for Best Narrative Feature), and eventually self-distributed it digitally and in indie theaters across the globe

Now, 2020 sees Cummings return with his next project — The Wolf of Snow Hollow — which features a bigger production, heavier themes, and some hardcore genre horror alongside the filmmaker’s signature mix of indie comedy and drama.

Following up a SXSW-Winning Feature

I began by asking Cummings to take us through his journey from distributing Thunder Road to working on its follow-up, The Wolf of Snow Hollow. Here’s what he said:

So, we finished Thunder Road. We submitted it to South by Southwest. We got in and we won. But, even then, we still couldn’t get anybody to buy the film for more than half of the budget. And, the budget was 190 grand. So, we decided to self-distribute. We sold the film to basically every territory in Europe and all over the world. And, it’s had theatrical releases in over twenty-eight countries now — which is crazy. So, at this point, we’ve basically started our own production and distribution company that is kind of following the Soderbergh model of doing “one for them and one for us.”

If you’ve paid even a little attention to the production and path to distribution of Thunder Road, you know they’re fascinating topics. In fact, Cummings himself has been very open with his short-to-feature process, as well as the new models he’s developed for helping other independent filmmakers self-distribute their own films.

Cummings also talked a bit more about the challenges of working on The Wolf of Snow Hollow, which was shot in the small town of Coalville, Utah over twenty-three days with a mostly local crew.

Originally written before Thunder Road and initially shopped around to no avail, The Wolf of Snow Hollow was quickly greenlit after Cummings won big at 2018’s SXSW, forcing the filmmaker to jump into production and to put his writing, directing, and acting methodologies to the test once again.

The Diplomacy of Directing

In discussing the multiple duties — writer, lead actor, feature-film director — he undertook on The Wolf of Snow Hollow, I asked Cummings how he was able to handle all three roles, as well as what he’d learned from taking them all on multiple times now.

So, when I was doing it the first time, it was basically out of necessity. We didn’t know anybody. We didn’t have any big famous actor buddies. So, we couldn’t really do it with anybody else, and I was the only person who had done that sort of thing before — with the “Thunder Road” short — which was humiliating and ridiculous. But, I knew I was going to put in the twenty-four hours a day to rehearse and make it perfect. So, we shot it. We made it. And, I learned a lot on that set of what the practicals of making a movie are. And, I feel like it basically gave me a toolkit to make more stuff.

Speaking on The Wolf of Snow Hollow, Cummings estimates that the scale of the production was roughly ten times larger than Thunder Road — which was shot in Austin, Texas with a small indie cast and crew. However, as Cummings quickly experienced in his new film, there are plenty of new challenges when you have anywhere from fifty to sixty people on set at any given time. Cummings jokes:

Once he found himself managing everything from parking to moving sets, Cummings realized he’d “basically have to become a diplomat” as the director, and spend as much time working on the politics as the performances. There’s a lot to be said about acting in a project you’re directing yourself.

Transitioning from Comedy to Horror

Thunder Road stood out for its relationship between comedy and drama. And, while The Wolf of Snow Hollow certainly has comedy and drama elements as well, it’s also very much a horror film. Jim spoke on adding this new genre to his filmmaking style:

Yeah, so it is a werewolf movie and it is a horror movie. But, even in this “genre of horror,” I’ve always looked at it as a comedy, then a drama. And, I think horror is one of those things where it functions the same kind of way that comedy does, where you have to hold the audience’s attention. And also, there are punchlines that just happen to be scares rather than jokes. So, I feel like I had already kind of organized my thinking around impressing an audience and a set of payoffs. It just became about scares for some spooky scenes.

While it’s always difficult for filmmakers to cross genres — especially a genre with such rich history and iconic tropes — it’s also very much how we consume art and media these days, with filmmakers from Ethan and Joel Coen (the Coen Brothers) to David Fincher working hard to combine genre styles and expectations. For The Wolf of Snow Hollow, Cummings likens the very nature of horror to those deep feelings you get when you can’t decide whether you should be laughing or frightened.

Originally slated to be released mid-spring, The Wolf of Snow Hollow was delayed until October because of COVID. I asked Cummings about the ins and outs of releasing an indie-horror film at a time when most theaters are shut down and major blockbusters are absent:

It really sucks that films like Halloween Kills and Candyman didn’t come out as the huge movies that we’ve all been looking forward to as fans. But, then, that also means that these indie movies like Save Yourselves!, Scare Me, and The Wolf of Snow Hollow have been able to be released and not buried under the competition. You know, the pond all of a sudden becomes a lot smaller because we don’t have to recoup ticket sales quite like the other, bigger movies did. So, I think all three of these movies went onto iTunes around the same time and, you know, we got a lot of eyeballs because of it.

If everything had gone originally as planned, Cummings estimates that his film (along with others meant to be released around the beginning of the pandemic) would just now be finishing up its theatrical run and hitting VOD to capitalize on the Halloween market.

However, it’s interesting to see how indie features — like the ones Cummings mentioned — have been able to fair as digital-only releases and without the major blockbusters to compete against.

The State of the Industry

In the wake of releasing his most recent film (and with another already in post-production), I asked what his thoughts were on the current state of the industry and his advise for those who are similarly weighing their options of whether to submit to festivals or self-release:

Yeah, it’s a difficult thing as I’m such a huge fan of film festivals, and we’re certainly submitting our new feature to festivals here soon. I think if you have a short film and it’s really good, I would reach out to Short of the Week or send it to the Vimeo Staff for consideration because I think we’re looking at a digital landscape for the time being. Because, while “Thunder Road” played almost every film festival and for audiences around the world, it — very, very thankfully — actually had more people watch it in the first twenty-four hours of being out online than the entire rest of the year.

For many of us who work in film and video, this is a hugely pressing question, as it’s undeniable that many of us have plenty of projects in various states of completion at any given time. Whether it’s a script you’ve been aching to start shooting or a short film that’s finished and you’re looking to start submitting to festivals, whatever the case, Cummings makes a good point about just how undefined this current state of the industry might be.

So while Thunder Road — both the short and feature — certainly got a boost from film festivals and the associated awards, the upsides of a digital release and online word of mouth can actually be just as valuable.

Robert Forster and Jim Cummings in a scene from The Wolf of Snow Hollow. Image via Orion.

Having released a film during, well, all of this, I asked Cummings how he sees the future of film — specifically indie film — developing over the next few years? What new challenges and opportunities did he see on the horizon for aspiring filmmakers?

Yeah, it’s a weird (expletive) time. And, I think the benefit that independent filmmakers have is that now the world has become democratized. So, you can walk into a Best Buy or get on eBay and buy a camera (or rent a camera) that shoots a cinematic quality and in a way that was never possible, even ten or fifteen years ago. Now, technology’s at a place where you can build a film studio in your apartment. I think the future landscape of independent film will be more like Vimeo, where there is cultural curation and people who are making stuff to impress Redditor audiences rather than Big Bang Theory audiences.

While shutdowns might have hit the industry hard in some areas, there are some aspects about the future that give filmmakers like Cummings some hope. While his film might have gone through its own set of delays and uncertainties, it found a home and an audience online, all after being released without the stiff competition of big IP blockbusters.

Looking forward, there’s actually an opportunity for independent filmmakers to be the ones to step up with the DIY, small crews and safely distanced productions in backyards to fill the gaps left, while the majority of Hollywood might be forced to sit on the sidelines with their 150-plus crew productions on hold.

For more filmmaker interviews and inspiration, check out these articles below.