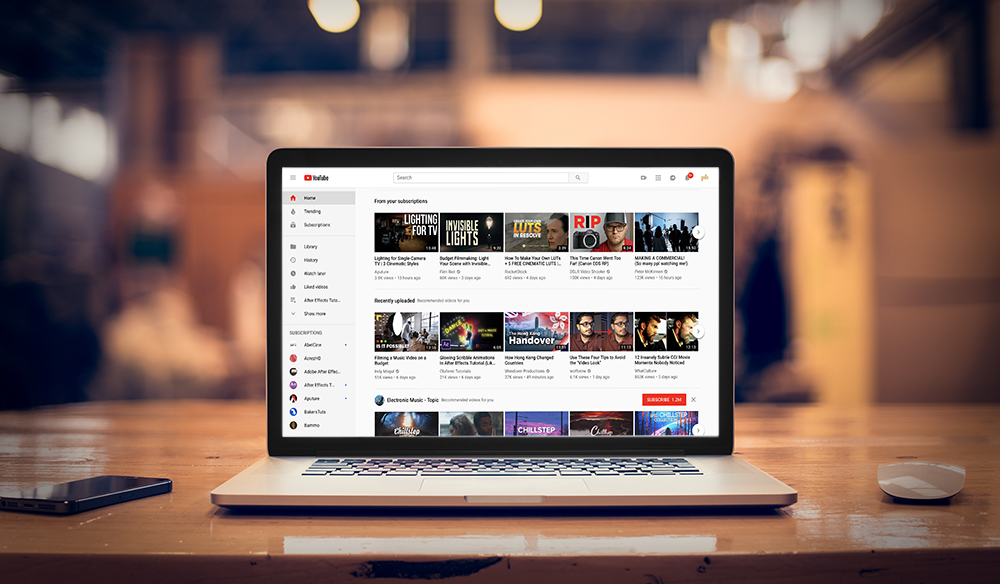 We rounded up some of the best YouTube channels every filmmaker should be following for inspiration and technical know-how in 2019.

Before we get to the list, let’s acknowledge the elephant in the room. Film Riot and Peter McKinnon are nowhere on this list. Yes, they all have big, creative, popular YouTube channels. But while they have millions of subscribers, this list is about some of the smaller channels that are just as good — if not better. So, without further ado, here are my personal favorite channels of 2019.

One of the more recent channels on the scene, Deity Microphones should be your go-to channel for all things audio. Whether you’re a one-man band setting up lavs, booms, and audio recorders yourself or whether you’re hired to run audio or grip for a production, these videos will adequately prepare you. Aputure recently bought Deity, and the quality of the videos and products is similar. The channel helps creators understand how to capture audio effectively — while going easy on the budget.

Speaking of Aputure, Ted Sim recently made the leap to head the Indy Mogul channel. After a two-year hiatus, the once-legendary tutorial machine is back and better than ever. Their output has been quite impressive lately — they seem to outdo themselves with each upload.

CookeOpticsTV is an underrated channel that is doing something nobody else is right now. The videos take the best cinematographers in the world and showcase their work through interviews and shot breakdowns. What better source for inspiration and information from than the people shooting your favorite movies?

In the video above, Bradford Young discusses how and why he uses certain lenses for certain scenes. This video is a good example of how the whole channel operates, bridging the gap between the Oscar winners and us.

Straying from the traditional tutorial model, Potato Jet is more of a review channel. Anytime a new camera gets announced, you’ll most likely see a review (or several) here. The content ranges from storytime to full-blown technical breakdowns. It’s a perfect channel for anybody thinking about buying new gear.

Full disclosure: I work on this channel. So yes, I’m a little biased, but that’s because I’m super proud of what we’re making! The channel is home to all facets of video production and editing. Whether it’s giving away free assets every other week or showing you how to recreate iconic film looks, the channel is full of production gems. Check it out and let us know what you think in the comments!

One of the bigger motion graphics channels out there, Sonduck Films consistently puts out quality After Effects and Premiere Pro tutorials each week. Even if you’ve never opened After Effects, Josh Noel publishes intro-based tutorials that make his information approachable. Whether you’re in the business of editing corporate videos, weddings, or documentaries, these tutorials will improve the production value of every video you work on from here on out.

For anybody already working on set — or hoping to — this channel is for you. Covering all things grip-/gaffer-/PA-/lighting-related, this channel is as simple as it gets — but the information is timeless. I originally found this channel because I was looking for videos about Duvetyne and found this. (Also, if you can make an entertaining video about Duvetyne, you have my subscription.)

The Film Look will save us all. Operating with under 22k subscribers, The Film Look is without a doubt one of YouTube’s best kept secrets — especially within the filmmaking community. Covering all aspects of production from planning a shoot to exporting your video in Premiere, their content often includes film theory and production walk-throughs. (Once you’ve watched the video above, go check out their “5 Different Camera Rigs in 1 for $500.”) Think of this channel as the best DIY friend you’ll ever have.

The true hero of YouTube right now. No flash, no flare. Just getting down to hard facts. No matter where you are in your filmmaking journey, this channel is constantly releasing in-depth, informative content. Take this breakdown of dual ISO for example. Our very own Todd Blankenship covered this video and explains why content like this is so important.

Easily one of the most reliable and consist creators on the platform, YC Imaging is still producing solid, actionable content with no other intent than to teach his subscribers how to be better filmmakers. Often hosting videos on how to be the most efficient solo-shooter possible, the channel’s quality has only gotten better as its host, Chrystopher Rhodes, continues to master his craft. And he shows no signs of slowing down.

I know, I know. Of course we had to plug our own YouTube channel — we’re super proud of it! Covering all skill sets, video editing, cinematography, and directing are just the tip of the iceberg of what we cover. And every year we have free week, so come on, who doesn’t love free video stuff?

Other channels to check out: