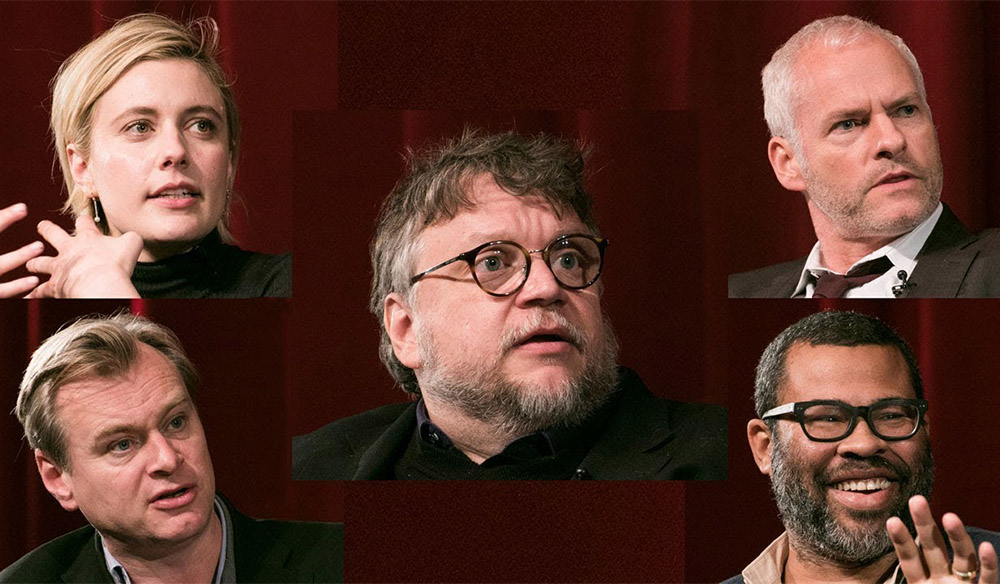 The Directors Guild of America hosted a three-hour conversation with these incredible filmmakers. Here are the takeaways.

Cover image via The Directors Guild of America.

This year’s Oscar for “Outstanding Directorial Achievement in Feature Film Award” went to Guillermo del Toro for The Shape of Water, but in this three-hour conversation, you can learn some valuable filmmaking lessons from all five of the nominees.

Hosted by the Directors Guild of America and moderated Jeremy Kagan, this video presents the experiences and perspectives of directors Guillermo del Toro (The Shape of Water), Greta Gerwig (Lady Bird), Martin McDonagh (Three Billboards Outside Ebbing, Missouri), Christopher Nolan (Dunkirk), and Jordan Peele (Get Out).

In this write-up, I’ve pulled out five key lessons that should prove useful in your own filmmaking journey. If you have the time, the whole conversation is well worth watching, as there are many fascinating filmmaking anecdotes and approaches.

1. Stay on Your Feet

One of the first questions Kagan asks is “Where do you position yourself on set?” which seems like a fundamental question. Christopher Nolan, for example, prefers to be as close to the action as possible:

I’m always beside the camera, so I always get as close to the camera as possible. I don’t use chairs — we don’t tend to have chairs or a video village on set, so we tend to just try and keep the energy moving.

So I tend not to sit down during the day, and I’ll stay right by the camera and try and watch with my eyes what’s going on and take in as much as I can that way.

I wear a little UHF monitor around my neck so I can just check framings or use the one mounted on top of the camera, but basically I stay by close to the camera.

For directors who like to be a little more aloof, wearing a monitor from the comfort of a chair in video village makes sense to me as an editor. If it’s not in the camera, it’s not in the film. But in order to engage with the actors and direct more intimately, there seems to be no substitute for standing close to the camera.

In fact, Greta Gerwig also stays away from the “video village” approach:

That I don’t like video village also comes from the fact that I’ve been an actor on a lot of different sets, and I find, as an actor, there’s nothing worse than feeling like there’s a committee that’s a little away, that’s judging everything.

And so I like to keep it kind of moving and fleet. So I’m usually by the camera because I like to be sort of a one-person audience — in that way for the actors, that they’re kind of getting the performance to me and the camera at the same time.

2. Write for the Screen 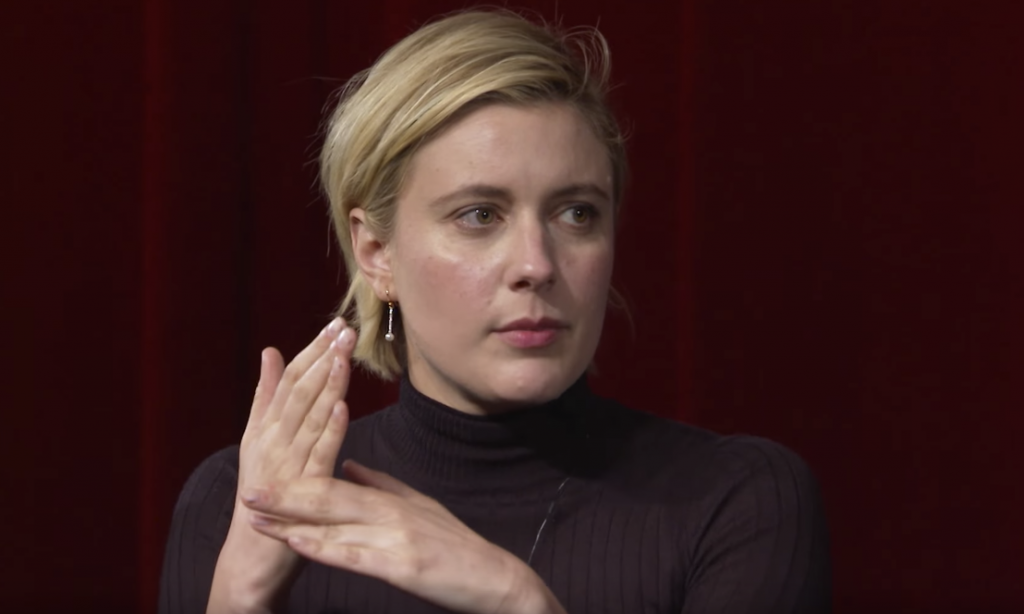 Image via the Directors Guild of America.

Several of this year’s nominees are also credited as writers on their films; in fact Greta Gerwig, Jordan Peele, Guillermo del Toro and Martin McDonagh were also nominated for Best Original Screenplay.

There’s a question for Gerwig about 28 minutes in to the conversation, and in her response, she describes her writing process and the way it translates to the screen, which I think offers some really interesting insights into good screenwriting. The script is the blueprint for the film’s production, but it’s not designed to be published on its own. It carries the rhythm, structure, and feeling of the film that the cast and crew will bring to life.

Here are a few of my favorite lines from her response:

I would say my movie is almost entirely on the page, even the cuts are on the page . . . I need to know what the rhythm is in an editorial sense, on the page already, I don’t like finding it in the edit in the same way…

I like to know how we’re gonna cut from this to this and what that rhythmically will do to the words.

So they’re in the bed.

And then they’re making the bed.

And and then they’re in the car.

You can see what Gerwig is talking about in the first page of the shooting script for Lady Bird. 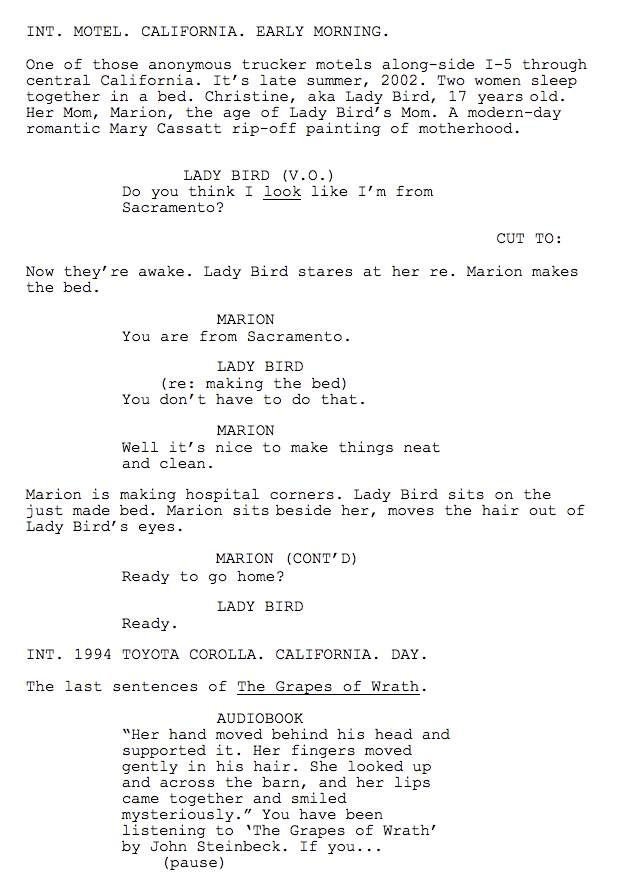 She also talks about crafting an opening to the film that is, in essence, the entire film in one moment:

I love in movies when it feels like the opening of the movie is the entire movie in a scene. And then you basically watch that entire thing play out.

So the opening lines are:

“Do you think I look like I’m from Sacramento?”

“You are from Sacramento.”

“Are you ready to go home?”

And I wanted the language both visually, and literally the language that they were saying, to be both simple and plain but also have the ability to be poetic in its own plainness.

3. Try New Things with Every Film

One of the things that surprised me about The Shape of Water is that its budget was only $19.3 million dollars. That’s pretty small for a film of this ambition, and part of del Toro’s solution was to use dry for wet filming techniques, rather than doing tank work for some of the more complicated water scenes.

So he had 10-12 puppeteers moving every object that’s floating around in the scene, as in the opening shots of the trailer when the main character is dreaming she is under water.

Del Toro describes all this at about 25 minutes in:

That’s why I like to experiment with little things on each movie, to get new tools.

In this case, I knew that the dry for wet would work. I had done it before, but I really wanted it to be very painterly, and this required a new camera setup. So we tried different mounts, and we ended up with the steady-arm on the dolly, which gave me the fluidity and the precision [I wanted].

So what you didn’t have was the XY axis all over the place, and it allowed me to go through doors . . . but not in a nodal way. I could float the head around the corner, as opposed to having the nodal tilt or pan.

The words are important, but the ideas are what’s really crucial.

And there are many, many words, many lines that could be replaced with other versions of lines that can get us to these same ideas.

Get Out director Jordan Peele shared these thoughts about his approach to filmmaking, which I think is really important to remember throughout the production and post-production processes. The honest ideas at the heart of a film are what audiences will connect with — much more than any one specific line of dialogue or moment.

In the DGA conversation, Peele talks about his rehearsal process on the film and how he was struggling to believe that two main characters were really in love, but when he found the honest idea he could focus on, it became believable:

I was feeling like I wasn’t believing they were in love . . . The moments that worked were when there was a comedic moment. When somebody said something funny, and the other one laughed. And so that was the thing, it was like ‘That’s it!’

You guys are in love because you share a sense of humor, and that’s a love story everybody can relate to. You can be from two different worlds . . . if you are in love with how somebody makes you laugh, then it reminds us of our love . . . so we focused on that, and we even started writing new moments to make sure that side of their relationship was fleshed out.

I think this concept of sticking with honest ideas over specific lines or moments is crucial in the editing suite, and it’s similar to the editing concept of ‘killing your darlings’ — those shots or scenes that you worked so hard to produce, but (for whatever reason) just don’t work in the final edit. To make the whole film better, they have to go.

Keeping everything that plays to the truth of a character’s motivation, or the truth of the world of the film, will feel coherent and real to the audience, but elements that fail this test will stick out and pull audiences out of the film.

There’s a brilliant story from del Toro about embracing the unexpected, which is queued up in the video above.

He raises a really important point that is essential for any director: be able to “orchestrate the accident.”

I agree with Chris. If this is a circus, you are creating an arena. You need to define, prepare, plan, codify, everything. So within that space,  there’s not such a thing as an unlimited freedom — that’s madness. You need a limit, to be free within that limit.

So the more you prepare, the more the accident will be benign. What I think is a disaster is when somebody doesn’t prepare and an accident happens. The reason why we can have the strands and say this is the good one is because we were fully prepared. And then you can identify the opportunity. But if you don’t [prepare], the opportunity melds with the disaster, and you don’t identify it.

Each director talked about having to embrace accidents and disappointments, on a daily basis, and use all of their preparation and filmmaking craft to turn them into elements that benefitted the final film.