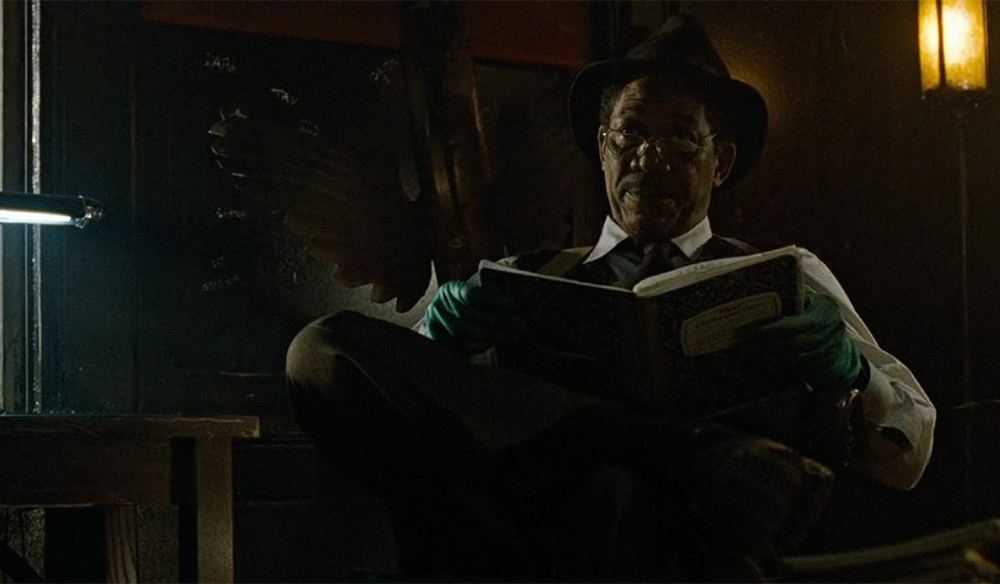 Let’s explore Darius Khondji’s five best film sequences and deconstruct the elements so you, too, can replicate these masterful approaches.

It would, of course, be highly subjective to say that any cinematographer has five best shots. It’d be hard to enlist five best photographs for a famous photographer, but handpicking five shots from just one movie, let alone two dozen movies, filled with hundreds of gorgeous compositions, seems like an endless nightmare. Especially if the work you’re trying to narrow down is that of legendary Iranian-French cinematographer Darius Khondji.

Therefore, this might not be a list of the five best shots of Darius Khondji, but rather, five shots from sequences that spoke to me. While Khondji has stated he doesn’t believe he has a distinctive style, many who study cinematography would tell you that he’s an artist who likes to work in the shadows—and is a master in doing so.

Let’s look at what they are and deconstruct the elements so you can replicate the shot.

Seven (often stylized as Se7en), a film by David Fincher and written by Andrew Kevin Walker, might be my all-time favorite film shot by Khondji. It’s the epitome of raw noir, and it’s photographed immensely. While it’s hard to step away from the story, sometimes it leaves you awe-struck when you do so and analyze the shots. Take a look at this shot of Detective Lieutenant William Somerset, played by Morgan Freeman. His portraiture is near enough in complete darkness, with only touches of light on his clothing and nose to accentuate his presence. Most of the tonal range exists within the background, but it works so perfectly.

My favorite shots from Se7en are of those in the car. There’s a certain elegance and simplicity with the way they were constructed. For example, there are only two shots of Pitt‘s character in the end sequence for six minutes—a medium and a close-up. But, let’s talk about how Khondji shot the car interiors.

Se7en was shot on:

And, this was with:

For many of the car interiors, you may notice that it’s pretty bright outside, but it’s relatively dark inside. To the point where if studied longer than the moment on screen, it should be apparent that the car should actually be relatively brighter.

But, of course, the creative liberty taken in these circumstances places us in the dark foreboding world of two detectives on the hunt for a serial killer. To achieve this level of contrast, Khondji would underexpose the interiors by two stops. In doing so, that made the exteriors come to life.

The low-budget version: Use your camera’s metering tool and direct it towards the car’s exterior for a meter reading. Return the camera to the interior, and lower the exposure two stops from where the exterior was set. You’ll now have a darkened interior with the background correctly exposed and illuminating your talent, opposed to the ambient daylight filling your vehicle.

2. The City of Lost Children

The City of Lost Children is a 1995 film by Jean-Pierre Jeunet and Marc Caro. I’ve only watched this film once, and that was as a sixteen-year-old boy in film studies back in 2006. However, I can still vividly remember the haunting and surrealistic visuals to this day. If that’s not a sign of great filmmaking, I don’t know what is.

This shot and scene has forever stuck with me:

There were two key components—the lens choice and color cast to enhance the film’s overall surreal element. There’s an eerie green that seeps into the film’s color palette. This, of course, was accentuated by the set design and costume design, but there were also elements contributed from cinematography.

First, green gels were placed over lights where possible. Second, and most creatively, as the main set was built above a giant pool of water, they literally poured green pigment into the water to make it as densely green as possible. This, in turn, would also project a greenish ambient light from the water.

To heighten the surrealistic elements, the film made great use of an 18mm lens, which is extremely wide for narrative, let alone conversational, scenes. However, using such a wide-angle lens distorts the face and adds an ingredient of the surreal.

The low-budget version: Adjust your camera’s tint setting to include more green into the image. Or, preferably, you can add green to your composition by using post-production software, like Resolve.

Wide-angle lenses are perfect for surreal projects. But remember, if using one on a camera with a crop-factor, your lens won’t appear as wide as advertised. A 17.5mm lens on a Pocket 4K nearly becomes the equivalent of 35mm.

With Uncut Gems, we’re going to deviate from selecting a specific shot and, instead, talk about the texture each shot has, as it’s rather creative and applies to all shots throughout the film.

Uncut Gems was filmed on two different formats—digital with the ALEXA Mini and celluloid ALEXA LT & ST cam with 5219 negative film. The negative film was used in the daytime sequences, but the Mini was used for nighttime sequences. There was a creative choice to bring out the grain of the film, Khondji said to Kodak:

I don’t like the image to be too clean, as it just does not serve the purpose of storytelling, and Josh and Benny are of the same mind . . . We all wanted texture from the grain. We shot tests of interior and exteriors, experimented with different types of push and pull processing at the lab, and felt that pushing by one stop was the formula that gave us the nicest result in terms of texture. We shot the whole movie pushed by one stop.

Pushing daylight film one stop would make the grain more prevalent under daylight, and promote that underground rawness the story is chasing. Still, there would be an issue with such clean ALEXA images. Therefore, they increased the ISO to 1600, one stop faster than ARRI’s recommended 800. This brought out the nightscape and also increased the sensor noise.

However, to seamlessly blend the sensor noise and film grain, they added grain to ALEXA footage from the exposed 5219 film. In night sequences, the grain would subtly transform the background scenes.

The low-budget version: While increasing any ISO from the manufacturer’s base ISO will result in an appearance of sensor noise—consumer cameras won’t look as organic or smooth as the noise from an ALEXA. Therefore, if you intend to increase the ISO to bring out your image’s grittiness, make sure you extensively test beforehand to see how detrimental the ISO increase may be.

The Lost City of Z might be one of the most criminally underrated films of the last few years. It marks Khondji’s second collaboration with James Gray, received great acclaim, but woefully underperformed at the box office with only a $19m return on a $30m budget. That aside, as the film takes place in the Amazonian jungle, the film is (of course) beautifully shot with many stand-out sequences.

The shot I’m going to talk about in this segment is from the film’s final sequence and is spoiler-heavy, so please skip this if you intend to watch the film.

In the final sequence, both Percy Fawcett and his son, Jack, are captured by the natives. It’s a hauntingly beautiful scene. The character knows this is the last time he’ll be with his son and his last moments alive. He gives his son knowledge, wisdom, and hope in his final seconds. In the way of cinematography, this is reflected visually as the only light source is fire. There’s only fire and darkness.

There’s no overhead lighting, nor background lighting, to bring the characters out of darkness, and in fact, there was supposed to be. In the book conversations with Darius Khondji, he notes that the local authorities were going to build a road to the location so the filmmakers could transport a crane and illuminate the background. However, closer to the shoot, they found they could no longer build the road, and instead, the entire scene is lit naturally.

Along with placing fire everywhere—along the paths, the water, and in the hills—Khondji also had to push the film two stops and keep the aperture wide open.

The low-budget version: If you intend on only filming with practical light at night, you’ll need a lens with a really fast aperture like f/1.8 or f/1.4, and you’ll also have to make use of increasing your ISO. If your camera’s base ISO is 800, crank it up to 3200.

Ok, I know there are plenty of films to select from Darius Khondji’s impressive CV, but I want to jump back to Se7en for another shot. So many shots in Se7en, like this one, are just touched by light, opposed to being illuminated with any form of directional light. Even though there are a few practicals in the scene, there’s no overall sense of illumination directed towards Freeman, and that’s what Khondji states in the book Conversations with Darius Khondji.

I would say that, in most cases, I like to use what I call the “remains” of the light—not the direct and strongest parts of the light, but more like the final traces of it. So, I tend to use these gigantic lights to illuminate a scene, but the light I end up actually shooting is much less powerful. Usually, my lens is open at an f/1.4 or f/2.8 aperture, because although I’m using big lights, they’re either very far away or bounced against big canvas broken up through a few layers of diffusion.

It’s also important to note that he doesn’t tend to use fill light when shooting digital, but when he does (or shooting film), it would only ever be from a 30-degree angle from the key light. Whereas typically, we’d expect the fill light to be on the opposite side of the key, at 2-3 stops less than the key. In thrillers, sometimes the fill would be a top light, and that’s what we can often see being used in Se7en—the remains of light.

The low-budget version: Look to use a lot of bounce light instead of any directional and hard light, and pull away from using a fill light to imitate a contrasty dark image.

For more cinematography inspiration, check out these articles: