Saddle Up With This Royalty-Free Playlist for Westerns

Make the dusty, sun-bleached west your own with this curated playlist of royalty-free western tracks for your next indie project.

Westerns (and the people who watch them) demand authenticity — and authenticity can get expensive. You’re going to need some hats, bandanas, holsters, boots, and six-shooters. You’ll need to figure out where to get a horse or two. And if you’re going to skimp on your wealthy land baron’s costume, you might as well just rewrite the villain.

Fortunately, the music in western films is a trope unto itself, and some of the most famous western scores are even more iconic than the films in which they feature. If you’re looking for authenticity, using a few solid royalty-free western songs (like those featured in the playlist at the bottom of this post) is a much more affordable approach than staging a cattle drive in the parking lot behind the mall. Let’s take a look at — and a listen to — three eras of western film.

The western genre goes back more than 100 years, to a time before talkies existed. Pop culture has trained us to associate silent films with jaunty piano melodies and dramatic organ arrangements played live by a mustachioed man wearing a bowler hat.

1903’s The Great Train Robbery, directed by Edwin S. Porter and widely accepted as the first western narrative presented on film, was silent, and most versions of the film online do indeed feature the kind of soundtrack mentioned above. See for yourself.

Funny thing, though. That approach to movie sound was still over a decade away from mainstream adoption when The Great Train Robbery was released. So what did the film’s audiences experience? In a fascinating in-depth discussion with Post Magazine‘s Christine Bunish, University of Iowa cinema professor Rick Altman said, “sound came out of the stage practice of providing sound effects and music for every visible sound source.”

Bunish goes on to explain, “No directive was issued by Porter to theater owners to assure consistency of sound. Interpretation varied from place to place although certain sounds and sound effects were obvious: the train chugging down the tracks, the train whistle and bell, simulated gun shots. Music seen on screen, as in the dance hall sequence, was duplicated by the Vaudeville pianist or orchestra.”

Throughout the 1940 and into the ’60s, people looked to white cowboy hats the way modern filmgoers look to superhero capes. These mainstream movies were popular with regular folks and critics alike, and the music from the films was as likely to get recognized for awards as the movies themselves.

The score from The Magnificent Seven, composed by Elmer Bernstein, was nominated in 1960. The main theme endures as a definitive example of western film music, and it’s been widely used over the years in everything from now-banned cigarette commercials to campy James Bond movies and even as the intro music to massive arena rock concerts. Truly, it’s a go-to for anyone looking to capture the wide-eyed, can-do spirit of adventure associated with the American west.

A Fistful of Spaghetti Westerns

Emerging in the mid-1960s, the “spaghetti western” sub-genre introduced the world to one of history’s great creative partnerships: director Sergio Leone and composer Ennio Morricone.

Their collaboration spans multiple films, but it’s Morricone’s work on Leone’s Dollars Trilogy — A Fistful of Dollars, For a Few Dollars More, and The Good, the Bad, and the Ugly — that came to define the sound of the spaghetti western in the public’s imagination.

A Fistful of Dollars was the duo’s first collaboration, and the film’s score reflects both Morricone’s ingenuity and the production’s small budget. In addition to harmonicas, bells, trumpets, and the (at the time) new Fender electric guitar, Morricone’s score employs whistling, bullwhips, and gunfire, an approach that calls back to the sounds that accompanied The Great Train Robbery.

With a larger budget, Morricone was able to stretch a little on The Good, the Bad, and the Ugly, but it didn’t hobble his ingenious approach to writing music. The main theme’s iconic two-note opening trill, reminiscent of a coyote’s howl, pops up many times in the film, acting as a motif for each of the three main characters. For Clint Eastwood’s Blondie, the notes are played on flute. For Eli Wallach’s Tuco, the ocarina. When Lee Van Cleef’s Angel Eyes appears on screen, the notes are performed by the human voice.

Interestingly enough, all of these groundbreaking and massively acclaimed scores were often written for their respective films before production started.

In a 1987 interview, Sergio Leone said, “Ennio Morricone writes the music to your films before you shoot them. From Ennio I ask for themes that clothe my characters easily. He’s never read a script of mine to compose the music, because many times he’s composed the music before the script is ever written . . . I’ve always felt that music is more expressive than dialogue. I’ve always said that my best dialogue and screenwriter is Ennio Morricone.”

About the genre and his partner Leone, Morricone told Limelight Magazine, “You know, when I hear the words spaghetti western, I stop talking. Because it’s an insult to the work of Sergio Leone. Spaghetti is something you eat — the work of Leone is certainly not something you eat.” 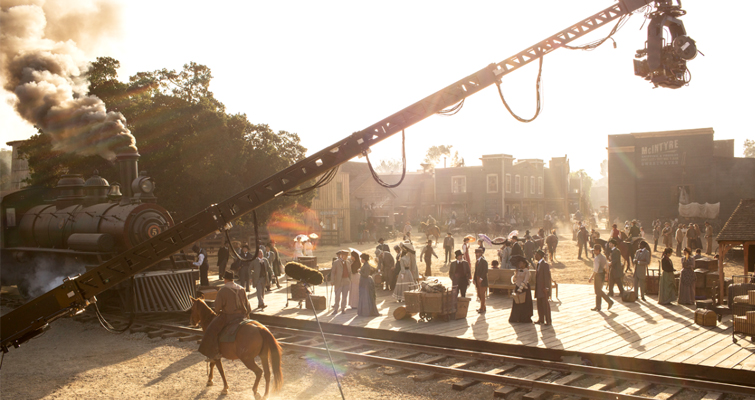 The curated playlist below is brimming with a ten-gallon’s hat worth of royalty-free western songs that call back to the classics of the beloved genre. Whether you’re going for redemption, reckoning, rustling, or rowdy rodeo action, lasso up a few of your favorites and use them in perpetuity with a simple $49 Standard License. Happy trails, amigo.

High Noon Tunes
Hitch your horse to the sounds of the west.
HEAR THE FULL PLAYLIST.
e w