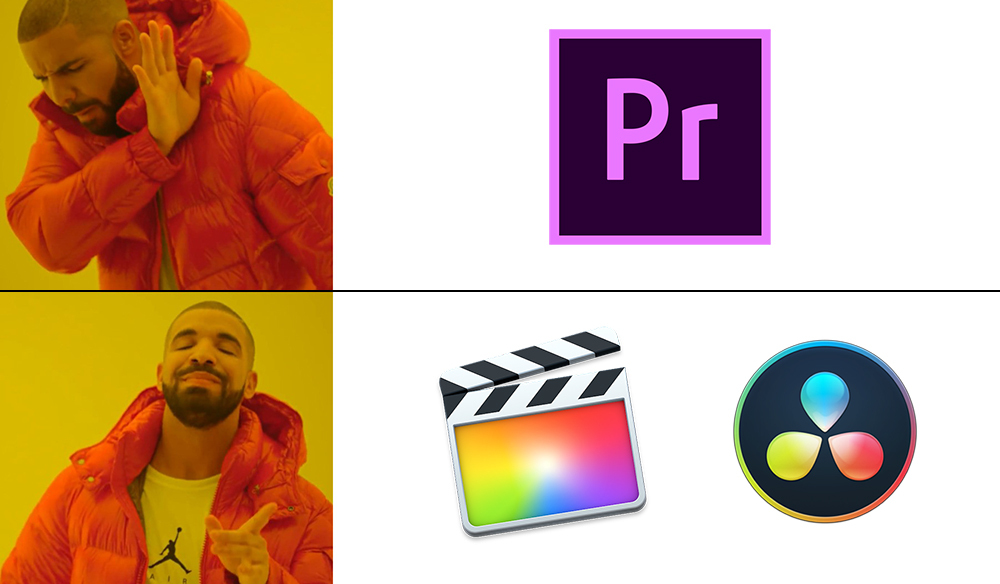 Premiere Pro Is Dead: Why It’s Time to Make the Switch

Are Premiere Pro’s best days behind it? If you said “yes,” then why are you still using it? Here are a few reasons I’ve moved on.

I mumbled this to myself as I stared forlornly at the all-too-familiar words on the screen in front of me: “Sorry, a serious error has occurred that requires Adobe Premiere Pro to shut down. We will attempt to save your current project.” Sigh.

As I sifted through seemingly countless folders of Premiere auto-saves and project recovery files, I had an epiphany: I don’t have to put up with this. Why am I still putting up with this when there are plenty more NLEs in the sea?

As many times as I considered leaving Premiere Pro for another NLE, I resisted for a long time. Even though I fully understood that, in this fast-moving industry, resistance to change can hinder progress and success. As such, I finally made the leap to FCPX, and I’m happy I did.

Let’s look at a few of the reasons I can’t shake the feeling that Premiere is falling behind when compared to the many other video editing applications currently available to content creators. If you can relate to any of the following frustrations, just remember — there’s no time like the present, and another bug or performance-slowing update could appear at any time.

Premiere Pro doesn’t just feel slow. It is slow. Toward the end of my time with Premiere, it seemed like the program got slower with each new release. Had I just become too biased? Was it all in my head?

No. It wasn’t. Because out of the major NLEs — Premiere Pro, Final Cut Pro X, DaVinci Resolve, and Avid Media Composer — Premiere is the slowest. With little effort, you can find videos and articles that prove it in detailed side-by-side experiments that compare workflow and export speed differences between programs. If you require additional social proof, simply skim the comments attached to the tests. You’ll find a few trolls, sure. But mostly you’ll find plenty of videographers discovering they aren’t alone in their frustration with Premiere’s performance.

Unlike most major NLEs, Premiere Pro requires a subscription. Image via mykhailo pavlenko.

I’ll admit it. I’m pretty over subscription models for software. Asset subscriptions? No problem. I just don’t like renting a tool that I use nearly every day. I want to own it.

When the subscription-based Creative Cloud was released in 2013, it seemed like a great deal and a solid concept. You pay a relatively small monthly fee instead of a larger upfront price like what’s associated with the disc-based Adobe Master collection. You can almost hear the marketing copy: “Less than $25 a month! Sign up to start saving today!”

I did sign up. And now, after years as a subscriber, the appeal of Premiere Pro as my primary creative tool just ain’t what it used to be. Because there’s no end in sight.At Premiere’s current cost of $20.99/mo, a year costs around $250. You can get Resolve or FCPX for a one-time payment of $299. Avid Media Composer currently comes in at $1,279 total, but at least you own it.

I get it, $20.99 is not a lot of money. But $20.99 a month over the span of a career is, especially for an issue-prone software that quickly ends up being more expensive than its more efficient competitors.

The Future Is All-In-One

If you’re working in Premiere, then nailing your desired final look requires a degree of program hopping. At a minimum you’re likely firing up Resolve and After Effects before things are wrapped up.

When DaVinci Resolve 16 hit the market, people began to see that perhaps one program can do it all. Resolve already had astounding coloring capabilities. When Blackmagic coupled those capabilities with traditional video editing, they created an ideal one-stop shop that immediately caught the attention of users.

This approach felt practically luxurious. The need and desire to jump between programs to create content vanished almost over night, and Resolve’s all-in-one approach served as foreshadowing — this is what the future of video editing looks like.

Switching NLEs Is Easier Than Ever

Switching any part of your workflow out for a new method takes time, and it’s never painless. But that doesn’t mean it has to take a lot of time and cause a lot of pain. The real pain begins when you finally realize that the change you’ve been sitting around hoping for just isn’t going to come.

If you’re ready to abandon Premiere in favor of an NLE that’s more efficient and user friendly — and less prone to consistent crashes — the time has never been better. There are countless hours and pages of free content available that make adopting a new NLE easier than ever. There are two “let’s get started” video tutorials in this section alone — one for Resolve, one for FCPX. You’ll find several more at the bottom of this post. Consider taking advantage of them.

In the end, you’re the only person capable of creating your video-editing happiness. And as consumers of professional video products, the greatest power we have is our wallets. Maybe Premiere Pro isn’t actually dead. Maybe the next update will change everything.

One thing I know for sure? I would rather pay $300 for a career-spanning, functional copy of Final Cut Pro X or DaVinci Resolve than spend over $7,000 for career-long access to a program that’s riddled with issues. What about you?

Spend some time with these great resources that cover the ins, outs, and benefits of DaVinci Resolve and Final Cut Pro X.