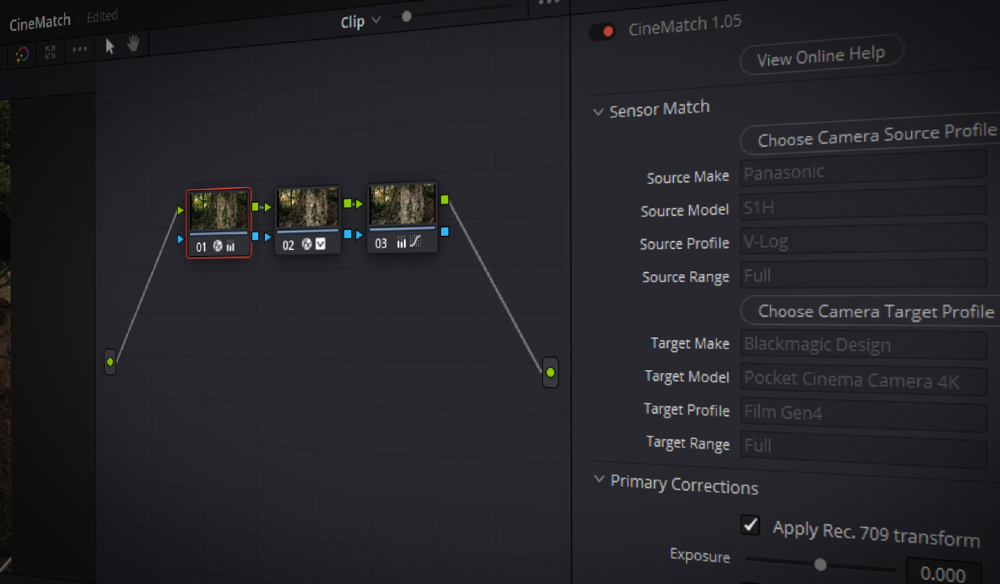 CineMatch – Color Matching at the Click of a Mouse

Let’s look at CineMatch, a new plugin from FilmConvert. We’ll discuss how to use it and if it’s actually worth your time.

The consumer camera market has successfully adopted many features typically once reserved for cinema cameras only, such as LOG profiles and RAW image processing. However, while many cameras can house LOG profiles, it’s important to note that the profiles will vary from camera to camera. V-LOG will be slightly different than S-LOG, and S-LOG will vary from BRAW film.

Even though they may all look like the same dull and lifeless clips waiting to be graded and brought to life, they all have slightly different properties, especially when it comes to color science. As a result, if you apply a standard REC 709 LUT to a flat image from both the Sony A7S III and the Panasonic S1H, you’d find variances in the colors. That’s true even if you recorded both images at the same time and in the same location.

As a result, you’d need to color match one or the other clips. If you have used a color chart on set, then using Resolve’s built-in Color Match panel makes the process incredibly helpful.

However, test charts can cost anywhere between $100 to $2000, so it’s not a tool no-budget to low-budget filmmakers are likely to have. Likewise, if the media is from a spontaneous travel video, the creator probably won’t carry a test chart with them. In these cases, you’ll find that many NLEs house their automated Shot Match function.

Resolve has one built-in, and for the most part, it’s good. However, when it misinterprets contrast or a color cast, it can also fall apart quickly.

For more intense matching that requires specific input control, we can look at CineMatch, a new plugin from the brains behind FilmConvert. We initially covered CineMatch way back in 2019 when it was announced and, as noted on the website, it’s been in development for quite some time. Let’s look at the application, how to use it, and if it’s any good.

As a side note, we’re using this feature within DaVinci Resolve. CineMatch is also available for Premiere Pro, and there should be a Final Cut option sometime in the future.

It’s essential to CineMatch the clips before you do any form of grading. And, while you can apply CineMatch on the edit page, it’s heavily preferable to do this on the color page. So, we’ll go to the color page and look at the clips that need matching.

I have two shots. A close-up of water running from the Blackmagic Pocket 4K shot on the film RAW setting, and I also set up an S1H as my B-Cam to capture some wide shots. This was filmed using V-LOG. As the S1H was my B-Cam, we’re going to match the S1H to the primary Pocket 4K footage.

We can see from the ungraded clips, there’s a discrepancy between the two clips. There’s a push of green in the S1H, and it’s reading darker, even though both cameras were using the same ISO and aperture.

Let’s fix this. On the first node of the B-Cam footage, add CineMatch from the OpenFX panel.

At this point, you should see a visual shift in both contrast and color as CineMatch shifts the B-Cam towards the range of the A-Cam. As CineMatch has a vast library of camera data and millions of data points from the said library, the shift to the target camera can be extremely accurate with this solo input data.

However, it’s rare to get an instantaneous perfect match right off the bat. Therefore, you may need to adjust the exposure and white-balance slider to help you achieve the closest possible match. And, remember to apply the REC.709 LUT for correct output viewing. You can leave this REC.709 LUT enabled, or disable it and apply your own conversion LUT to another node later into the grade.

Just like FilmConvert Nitrate, you can also find an HSL curve, RGB curve, and RGB wheels in the viewer OFX panel to further refine your match. However, also like FilmConvert Nitrate, I’m not overly fond of having this UI appear within the viewer panel. Things become too cluttered within the viewing panel if I want to modify specific colors that need tweaking to match the target. Although you’re using Resolve, there’d be no reason not to use the standard color wheels.

After a slight adjustment, and then my creative grade applied, this is the result.

Given that this was less than sixty seconds worth of work, there’s no inherent criticism to give—the results are fantastic. You push a few buttons, job done.

CineMatch also recommends applying CineMatch to the A-Cam clip, as well. They say:

The camera adjustments in CineMatch are customized to the response curve of your camera so that you will get more accurate and intuitive results with the CineMatch controls than the generic sliders in your editor.

The CineMatch controls operate on the underlying LOG footage, even with the REC.709 transform applied, so you can make corrections without fear of clipping your footage.

Now, there are some caveats to the plugin. This corrects footage that has been properly shot to be later matched up. So, you’ll need to make sure that the exposure from both the A-Cam and B-Cam are of similar values, and that the white balance is also the same. Of course, if there are slight discrepancies, they can be corrected using the adjustment parameters. But, if your footage from the B-Cam is two stops brighter than the A-Cam and is also filming at 3200K when the A-Cam is filming at 5600K, you may stumble into a running block in trying to match both clips.

Additionally, I found it quite helpful to revert the color profile of the same camera to its LOG profile (kind of). So, we’re not color matching two different cameras, but two different profiles of the same camera, which should make the grading process more efficient. I’m not even too sure whether the plugin was designed for this, but it’s undoubtedly a good workaround if you’re having trouble.

If you have accidentally used a “baked-in” profile, I find the process of matching the baked-in shot to the LOG clip a tedious task. For example, here I have two shots from the LUMIX S1. A few shots were accidentally captured in CineLikeD before correcting the settings over to V-LOG.

Using CineMatch, I can take the CineLikeD shot and give it the V-LOG target profile.

Of course, this isn’t truly LOG, as we didn’t capture the information with the LOG latitude. But, it does become incredibly more efficient in matching the baked-in profile to a grade I want to give the LOG shot.

To Buy or Not to Buy?

Using the Resolve Shot Match tool, we can see that the results aren’t as accurate as CineMatch.

But, I’m sure that you’ll be able to acquire the same results with enough time. I mean, that’s what color correction is, right? However, it could be argued that this is what you’re paying for with CineMatch—time. The sheer quantity of camera information housed by FilmConvert makes CineMatch’s shot matching seamless in what otherwise would be a tedious manual job.

If you find yourself in a position of using two or more different camera brands and you’re equally spending a lot of time matching your A- and B-Cams, CineMatch is going to be a $199 tool that will save you a lot of time in the long run. If you’re rarely color matching two different cameras, you can stay put with the built-in tools.

For more on color grading, check out these articles: