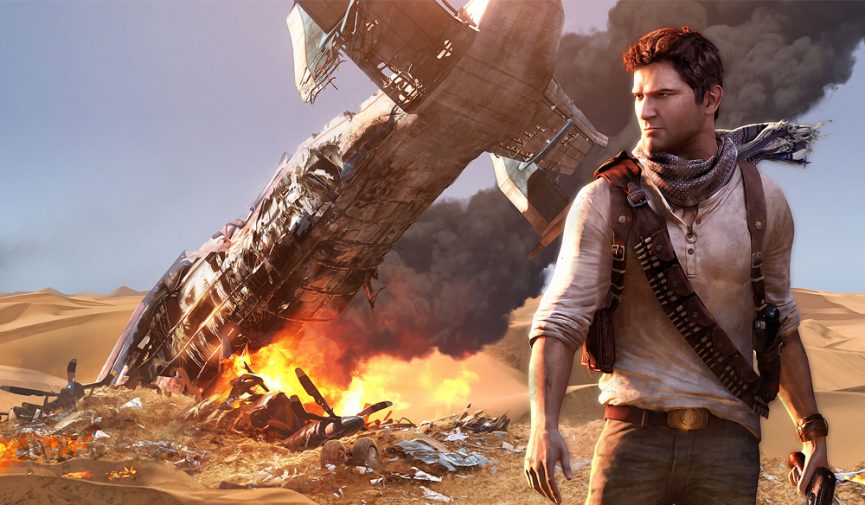 Find Inspiration Beyond the Big Screen

Filmmakers can draw inspiration from a number of sources. Check out these recommendations to broaden your horizons.

In Stephen King’s book On Writing: A Memoir of the Craft, which is part biography and part reference book for aspiring writers, he says, “If you want to be a writer, you must do two things above all others: read a lot and write a lot. There’s no way around these two things that I’m aware of, no shortcut.”

The same goes for filmmaking. There is no better way to learn than watching a lot of movies and television shows. And not only the good stuff. Watching the odd the film with a 20 percent rating at Rotten Tomatoes can also be insightful. Knowing what not to do in a movie is just as a critical as knowing what to do.

However, you should not limit your sources of inspiration to these two media. Sometimes you may find yourself unable to source an idea. That pesky third act for your short film just isn’t sliding into place — or your client wants an elaborate advert for his car dealership, and you are drawing a blank on the concept. It happens. Creativity is fickle.

Let’s have a look at three different forms of storytelling and how you can use them for inspiration. 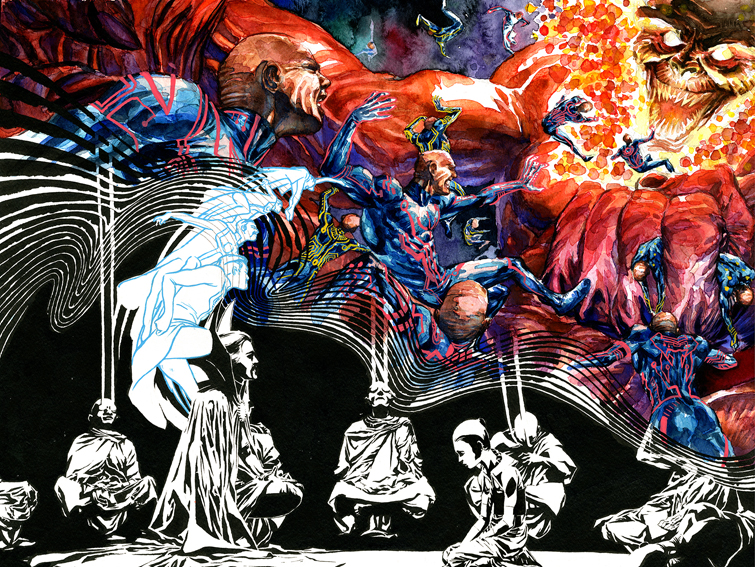 The theater is fantastic resource for sound design ideas. I’ve been lucky enough to see the play The Woman in Black three times in London’s Fortune Theatre. The difference between the theater adaptation and the film is that the play takes the form of performance inside an empty theater. An older Arthur Kipps wants to tell his story through the power of stage and has come to a young actor with the hope that he will perform his story. That’s it. Two actors in an empty theater with a few props and a number of projected backgrounds.

Unlike the grandeur of large set pieces and musical numbers, this production might seem somewhat dull. However, the play truly grabs your attention, and it doesn’t let go. While the actors and crew all do a tremendous job, the sound really sets the stage — literally, in this case. 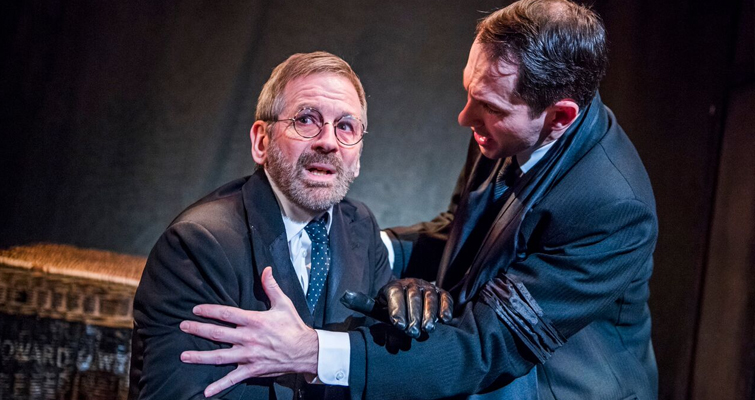 Sound is an often-misunderstood aspect of filmmaking, and many filmmakers argue that clear sound is more important than clear imagery. Going to the theater to hear the sounds of locations, props, and offscreen actions really helps you recognize the power of sound design. In films, sound designers and foley artists add and enhance sound to complement the footage. In theater, sounds can compensate for missing visual elements.

Video Games for Atmosphere and Storytelling

Video Games are the subject of a long-running debate regarding whether or not the medium constitutes art. Legendary film critic Roger Ebert said, “Nevertheless, I remain convinced that in principle, video games cannot be art.” However, it always seems like video game critics base their opinions on games like Pac-Man or Donkey Kong — antiques in the video game world.

However, if you’ve owned a console or PC and have played games within the last decade, you’ll know that they are now highly crafted stories with multiple interconnecting plots, varied characters, and worlds full of history and lore. 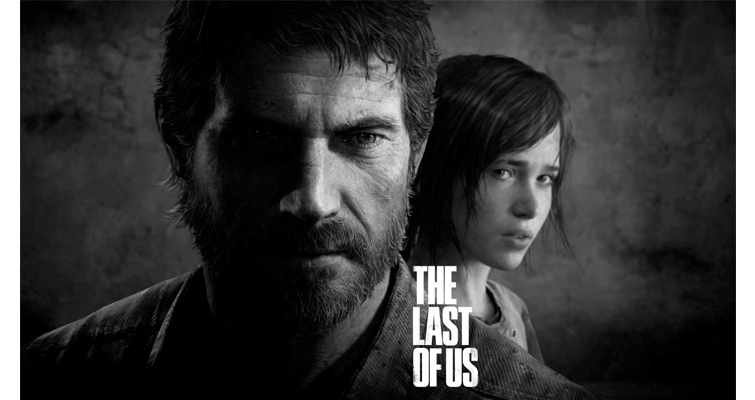 While long-form storytelling isn’t anything new, within the last several years, many TV shows have opted for overarching story arcs instead of the conventional procedural format of the ’90s and ’00s. Many video games have now opted for long-form storytelling too. These games prioritize story and characterization over gameplay mechanics. A common term to refer to this type of video game is “cinematic.” Games are increasingly competing with the cinema with their grandiose storytelling, powerful visuals, and great stories. They are a trove of narrative inspiration.

Check out these titles for a demonstration of the inspirational power of video games.

Some films just have an “atmospheric presence.” They present a lasting, noteworthy style. The Witch: A New-England Folktale, The Revenant, and Drive are recent examples. They present a viewing experience rich in a stylistic flavor, and although they don’t necessarily feature characters everyone can relate to, the substance of the films is enough to render them cult classics or critic favorites.

There are also video games that create this kind of atmosphere.

These games garner praise for their atmospheric elements while telling an engaging and provocative story.

Comic Books for Composition and VFX

Comic books have become a principal medium for expressing social and political culture. Even superhero books by comic book publishing giants Marvel and DC often come with a “teen and above” rating, and they are always pushing the boundaries of social issues.

So, what does this have to do with filmmaking?

99 percent of film productions begin in a comic book fashion with storyboards. The difference between cinematic framing and comic book framing is that, in a film, there will be movement within the frame, and in comics, the movement is implied from panel to panel.  A comic book artist wants to make sure you continue to move your eye from panel to panel until you turn the page. Conversely, a cinematographer hasn’t done their job properly if your eye wanders through the frame during a conversational scene.

While the two are fundamentally different media, you can definitely ignite a spark when it comes to composition. Daredevil 28 (2002) tells its story without any text bubbles or narration. I find issues like this incredibly inspiring. The creators (Brian Michael Bendis and Alex Maleev) have produced these images very carefully. Without narration or dialogue, the reader must analyze the imagery; there’s no room for a throwaway image. While the two media aren’t completely interchangeable, the notion of choosing your composition carefully is. 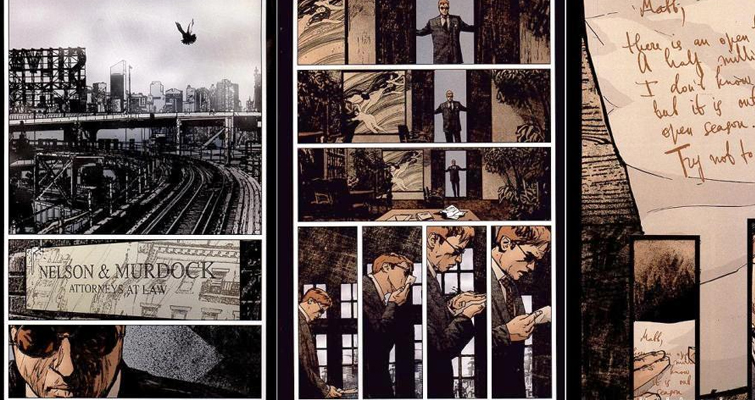 Another good example is Hawkeye 11. The entire issue is through the perspective of his dog. So, again, the panels tell the story very carefully to keep from confusing the reader. For a filmmaker, however, it’s interesting to see an exposed narrative core like this. 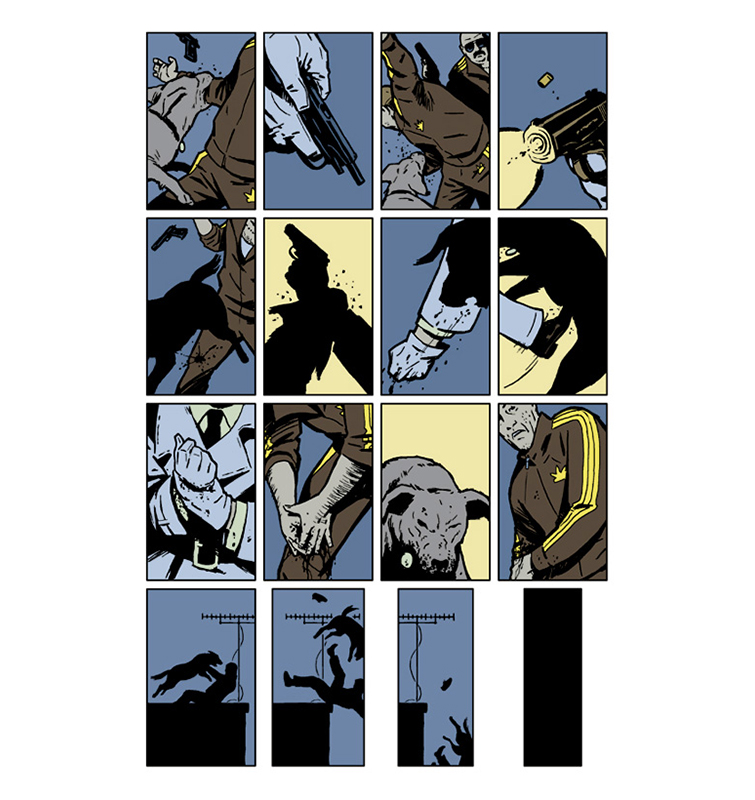 For more on the topic of comics and cinematography, check out this seven-minute video on IndieWire featuring comic book creator Ty Templeton. 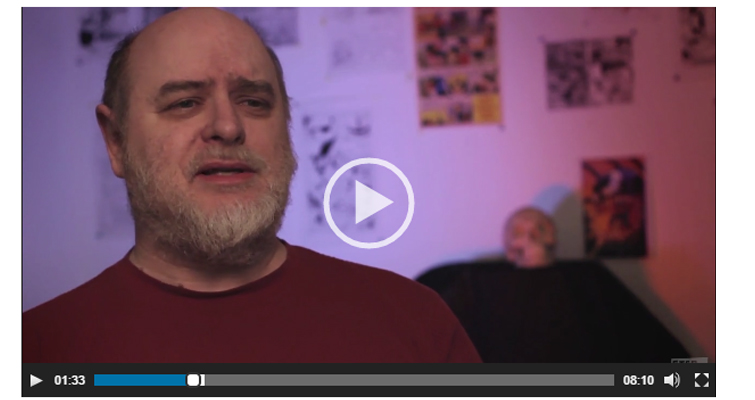 Check out these comic books for compositional inspiration.

Marvel and DC have both had distinctive house styles for the better part of seventy years. These days, however, both Marvel and DC are bringing experimental art into mainstream superhero comics. Check the panel below from Batwoman 4 (2011). 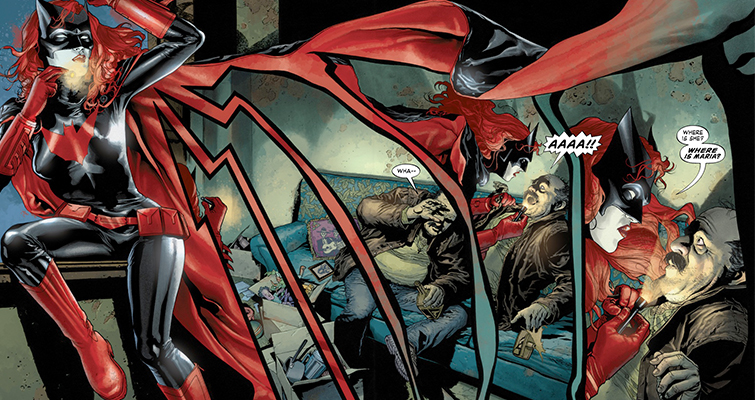 The artist, JH Williams III, has broken the page up into panels using Batwoman’s cape. This is a highly creative technique that produces something unique and beautiful. These books are a haven for creative VFX techniques. How could filmmakers translate JH Williams’s approach for filmmaking? To display several separate shots in just one scene?

What if your next flashback sequence took its cue from this approach? Photographs around a room can play out scenes like small TV screens. One by one, the static photographs turn into animated memories. We get to see a character’s emotional responses, and the memories all play out in the same composition without a single cut. (Ok, don’t use that one — I might use that myself.)

Check out these comic artists for creative inspiration.

These examples aren’t set in stone. You may find more inspiration for lighting from theater rather than sound, or costume ideas from a video game instead of story.  The list is endless. The idea is to broaden your horizons when it comes to sourcing ideas. You can only learn so much from watching Akira Kurosawa‘s filmography over and over. While film and TV are your principal sources of inspiration, other forms of entertainment can be just as influential.

Where do you go for filmmaking inspiration? Let us know in the comments.