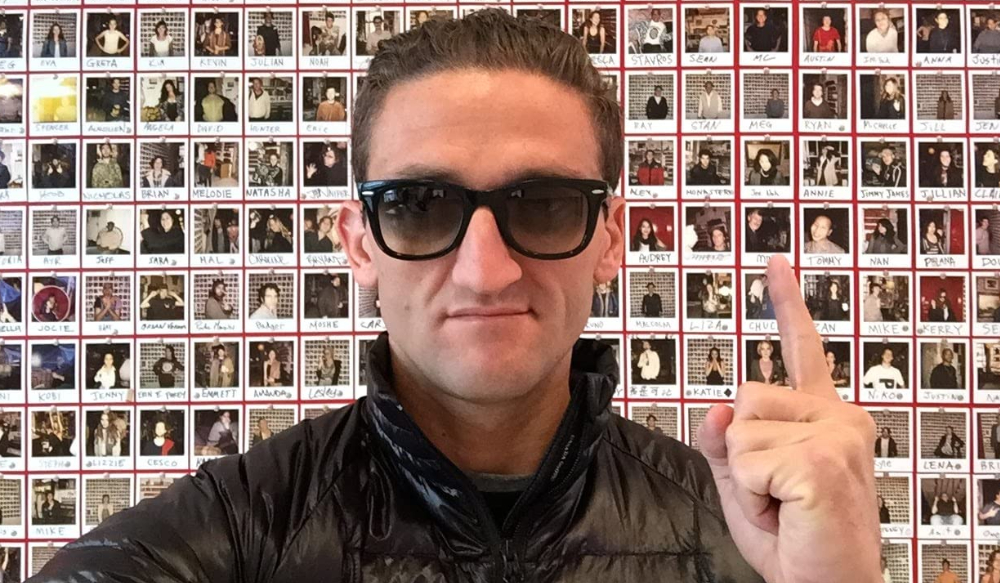 Interview: Casey Neistat on the Future of Creative Video Content

Let’s have a peek into the famous YouTuber’s camera bag and a look at how creative digital video is changing.

To many, Casey Neistat might be most known for crashing his bike into New York City trash cans, or spending Nike’s money traveling around the world for a viral ad. Yet, at his heart, the famous YouTube vlogger is just another filmmaker and content creator trying to turn his creativity into art.

Speaking recently at Adobe Max, Neistat shared tips and tricks for digital storytelling, shooting, editing, and more, all informed by his multi-decade journey as a content creator and filmmaker. We got the chance to catch up with Neistat to ask some questions about what sparks his creativity, his digital workflow, and how he sees digital content evolving in the future.

What sparks your creativity in today’s world of video content?

I find so much inspiration in how diversified YouTube is becoming. A few years back, there was what felt like only a couple kinds of creators. And, if you didn’t fit into that narrow description, it was difficult to succeed. Now, I see success all over the place. Technology-focused creators, entrepreneur/business-focused creators, lifestyle, family, sports, etc… It goes on and on. Overall, it’s seeing creators really lean into what they’re passionate about rather than trying to conform to what some might feel is necessary to succeed.

Neistat has always been a creative personality who found many outlets for his art. However, he really began his career as a filmmaker who just happened to find some early success by uploading some of his videos to YouTube. And, in many ways, his rise in popularity coincides tightly with the brand. They’ve both evolved over the years as content changed and audiences grew and diversified.

What have you recently been shooting your videos on?

I’ve recently switched over entirely to Sony. It was a hard process because I think Canon makes fantastic cameras. For years, including my entire vlog series, I shot on Canon—I love the image straight from their cameras, love their color science—but when Sony launched the ZV-1, I really felt like it was the perfect camera for a YouTuber. Then, when the a7S III dropped with the articulating screen, it closed the deal for me. I’ve been really happy with the performance.

Speaking about his own cameras and gear, after years of being a well-known user of Canon cameras, Neistat talks on his recent choice to transition over completely to Sony. However, as you’d quickly learn from watching Neistat vlog videos over the years, he really has been able to find consistency more in his style than with any camera or gear.

His run-and-gun shooting, combined with his quick edit style, opens up the possibility to use any variety of DSLR, mirrorless, or action cameras currently at his disposal. His current preference for the Sony ZV-1 makes sense too for anyone looking to embrace this selfie-shooting vlog style for their projects. Meanwhile, the Sony a7S III is perhaps the better choice for those who want to combine vlogging with more traditional video production practices.

If you’re looking for some vlog camera recommendations and gear roundups, check out these resources below.

Take us through your editing workflow and process for your videos?

I only edit my YouTube videos on a computer using Adobe Premiere Pro. Sometimes, when I’m messing around editing a surf montage or something fun for Twitter, I will use my phone but I prefer a keyboard and mouse for heavy lifting. I only edit chronologically—start with the first frame of the video and don’t stop or review until I’ve made it to the end. Then, I backtrack and can rearrange and all that. I find editing scenes first to be confusing. I love discovering the story by forcing it to reveal itself this way. Technically, I’m pretty boring. I almost only use straight cuts, I seldom color correct, and it’s even more rare for me to put any digital effects into my work. I find the rawness of the edit lends itself to my style of storytelling. Rather than cover up any scars or evidence that this video was made by one person, I embrace those flaws—often embellish them. Leaning into the imperfections is a way for me to say to my audience that I am not a pro, I am just a regular guy trying to tell a story.

When you watch Neistat’s videos, there’s an undeniable rawness to them that’s quite entertaining and endearing. You really feel like you’re there hanging out with him and it tracks as very direct. Neistat credits this style and feeling mostly to his digital storytelling abilities, and his preference for portraying realness over manufacturing cinematic elements. It’s also interesting to note that while he does embrace many new technologies and digital platforms for shooting and sharing his content, he still sticks with Adobe Premiere Pro for the majority of his editing needs.

And, like many of us filmmakers and editors as well, working with Premiere Pro can be both challenging and exciting—as long as you have the right tools and resources.

How do you see the future of video content evolving with new digital platforms?

TikTok is a unique case. They have really closed the gap between content creation communication on social media. TikTok is an entire production platform masquerading as an app. The editing, effects, music, and distribution is built in such a seamless manner. I’m excited to see where it goes. I believe that style of creation is a big part of the future of how we share. A world where the tools are so seamless, we forget about the process and just focus on the idea.

When looking towards the future, Neistat sees a new age of content creators and filmmakers who are learning to produce with all the tools they need at their fingertips. Using Neistat as an example of perhaps the last generation to learn how to create content just prior to the social networking explosion, and at the crux of the rise of affordable, yet professional, digital camera technology, Neistat sees an ever greater generation developing with those utilizing new platforms like TikTok.

He points to the seamless nature of TikTok’s unique design and use as a one-stop-shop for all your video shooting, editing, and distribution needs. And, if you haven’t made the (at least exploratory) dive yet, you should read up on how filmmakers and content creators alike can benefit from trying TikTok out.

I don’t know the answer to this but going back to the first question about what excites me; I think that being true to your passion, abiding by an unspoken understanding that if YOU find it interesting that someone else will also find it interesting, that then you will ultimately find your audience.

I like this as a nice last quote from Neistat as it sums up all his insights and advice the best. Since first starting out and rising in popularity, the Casey Neistat YouTube vlogger style has almost become a video and film genre unto itself. You can see it both replicated and parodied across the internet with other content creators using Neistat’s success as a way to inform how they approach their own content and storytelling.

However, at the end of the day, style does not trump substance. If you’re someone starting out in video, or looking to embrace new platforms and technologies, the key to finding success won’t be just what camera, editing platform, or app you use. Instead, it will be finding your own interests, voice, and content you’re passionate about pursuing.

For more interviews and insights into digital content creation and filmmaking, check out these articles as well.